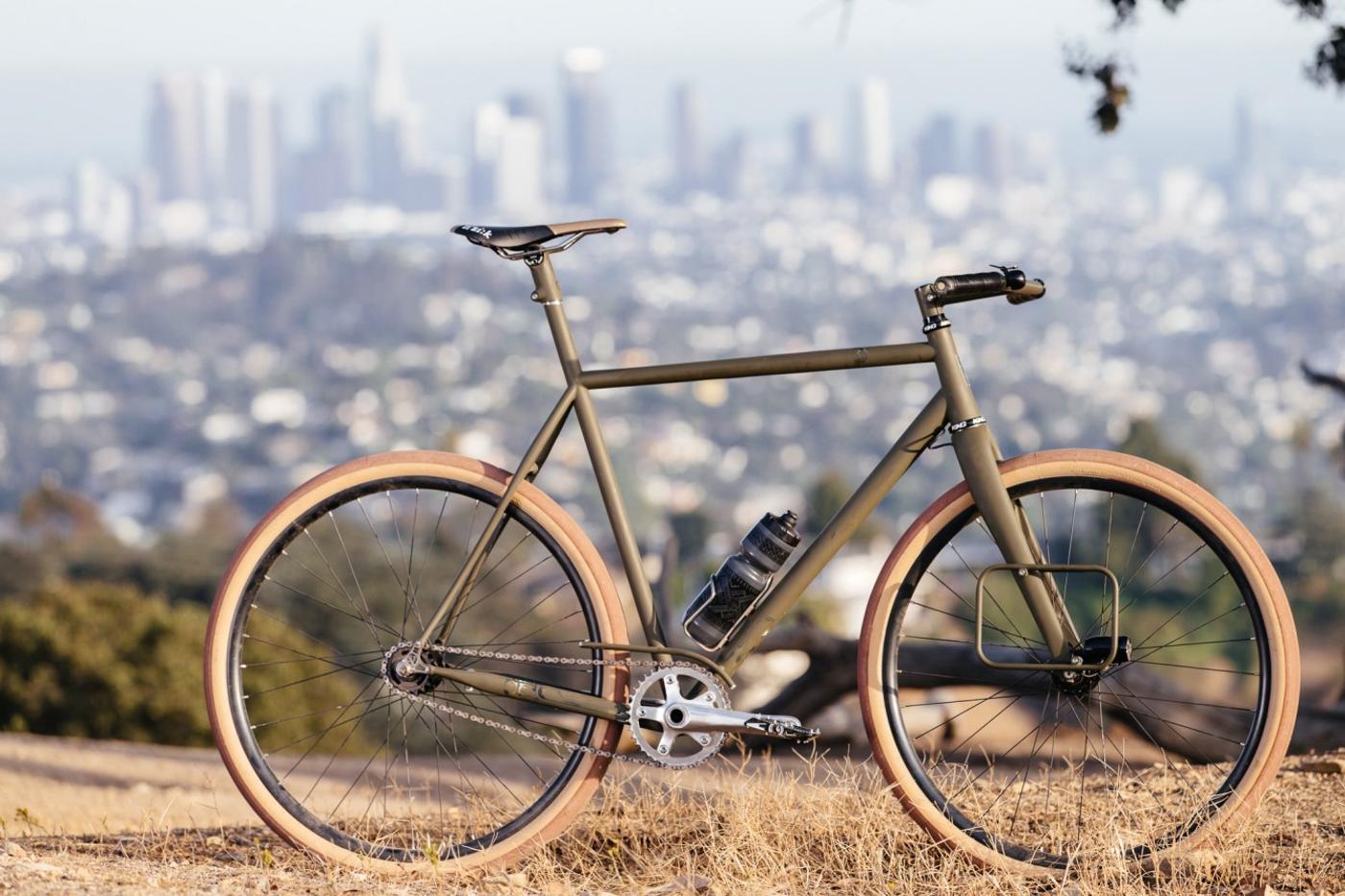 This bike was the most controversial post on the Radavist this year… who thought people took riding bikes so seriously?

“The Speedvagen Urban Racer. How can I even begin here? These bikes are… uh. Well, they’re kinda completely ridiculous. They’re not a traditional commuter bike, a cruiser, or a touring bike. They’re not meant to be loaded down with gear, or to be casually ridden around a park. Like a cafe racer of the bicycle world, these rigs are stripped down machines, meant to be ridden like a rocket… on 27.5 wheels and 43mm tires. Skids anyone?” 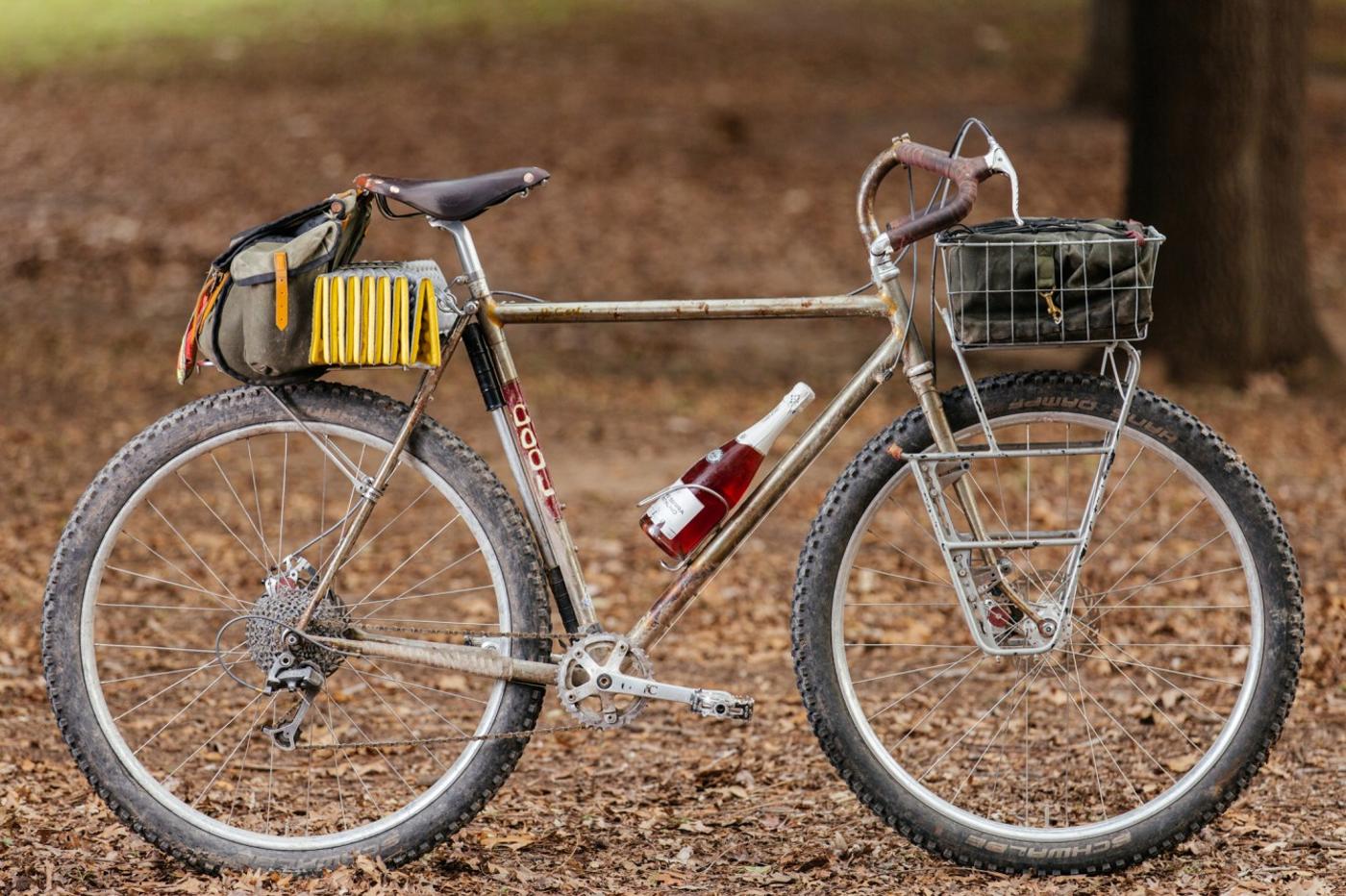 2015 was the year of the UltraRomance and ya know what? The cycling industry needs more souls like Benedict.

“Benedict, aka Poppi, aka @UltraRomance is a wild one. One that cannot be tamed by modern ideologies, or technologies for that matter. His Clockwork Bikes frame is a time capsule of the old days of yore when men would gather or hunt for their food in the woods. Even when something appears to be modern, it’s executed in a way that harkens back to the early days of klunking. Disc brakes? He slices fresh mushrooms on them and truthfully, he only uses them to stop for a tanning session. The throwback version of the narrow wide chaingrings is just a “narrow narrow” ring. An outer “bash guard” ring pressed up against an inner ring with a spare “rabbit” personal massager holding it in place. Even his “marsh mud” tubeless setup is pulled from nature. Literally…” 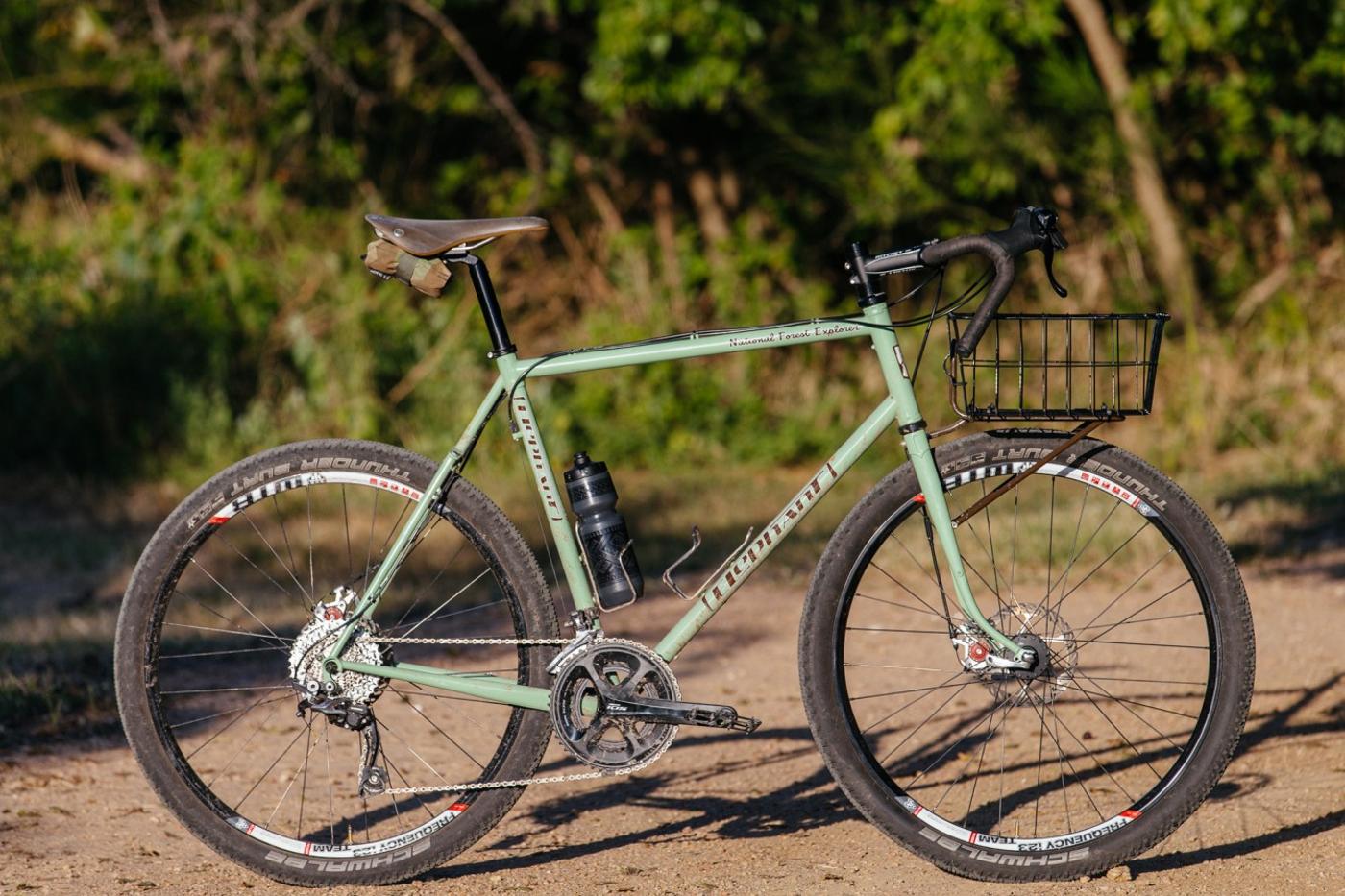 Clearly we’re seeing a trend here with dirt-drop tourers. I wish I hadn’t sent this bad boy back to Washington!

“The Elephant Bikes NFE is alive. A beautifully-elegant specimen of the bicycle that dances with you on the climbs and lets you really lean into it while descending. While clearly its intent is to be a back country tourer, inspiring you to explore National Forests, we here in Austin, Texas have no such place nearby, so I took to exploring our local trails, State Parks and swimming holes.” 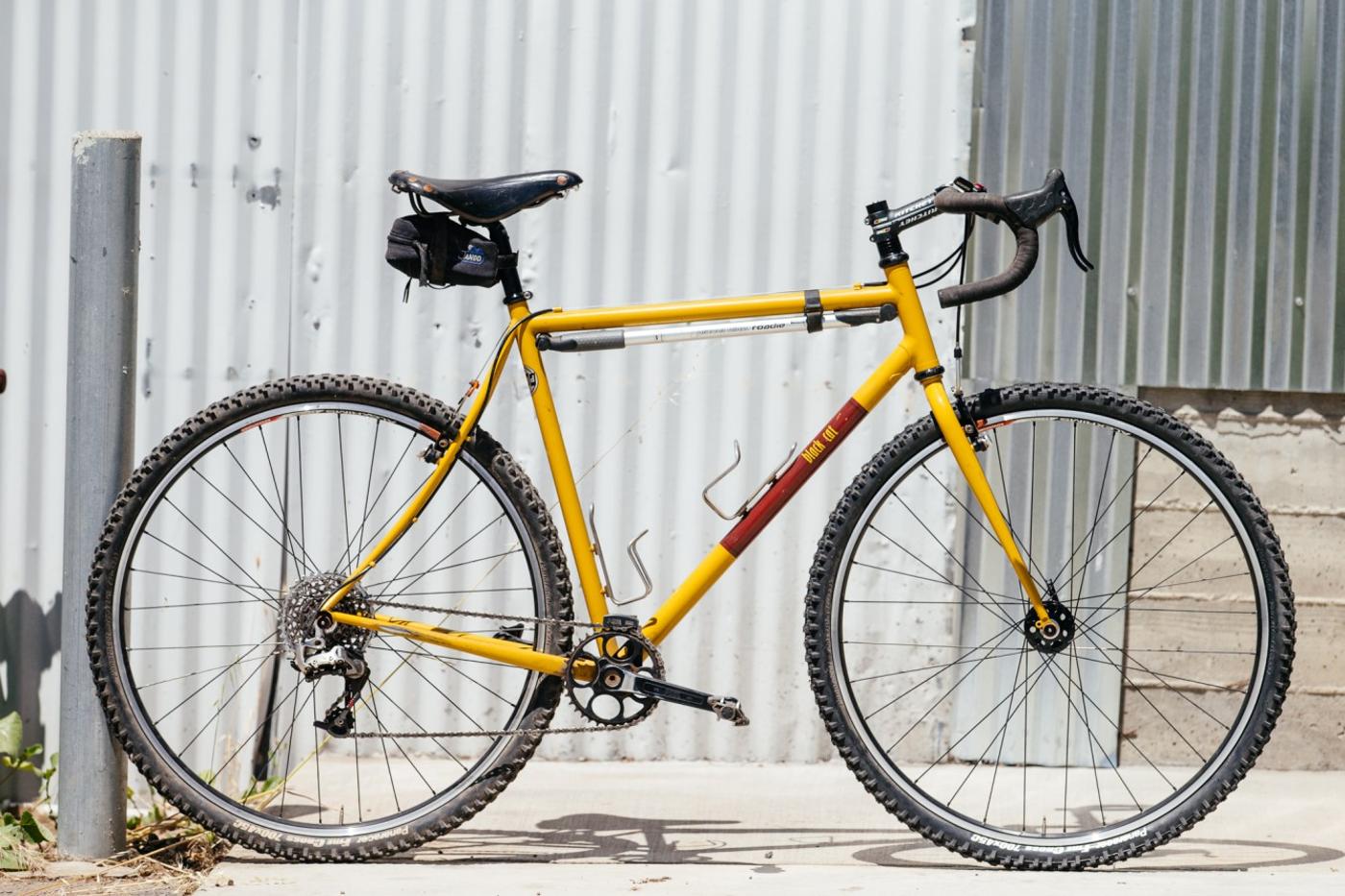 Even I was amazed at how much traction this monster cross got in the muddy world of the cycling community. It’s easy to see why!

“When Paul Component owner Paul Price started to “make it big” he told himself that he wanted to order a bike each year from a NorCal frame builder. Retrotec, Rock Lobster, Sycip, etc, etc. At the time there were a handful of builders and for a few years he kept to his yearly deposit.

Then he got busy, the framebuilding industry grew and technology changed. For a few years he focused on the company and put his frame builder promise on hold. He then came back around to his promise and at the Sacramento NAHBS, picked up this Black Cat monster cross from Todd. Soon it became his staple bike. Like many custom frames, Paul had an idea for this bike that surrounded a specific component or part.” 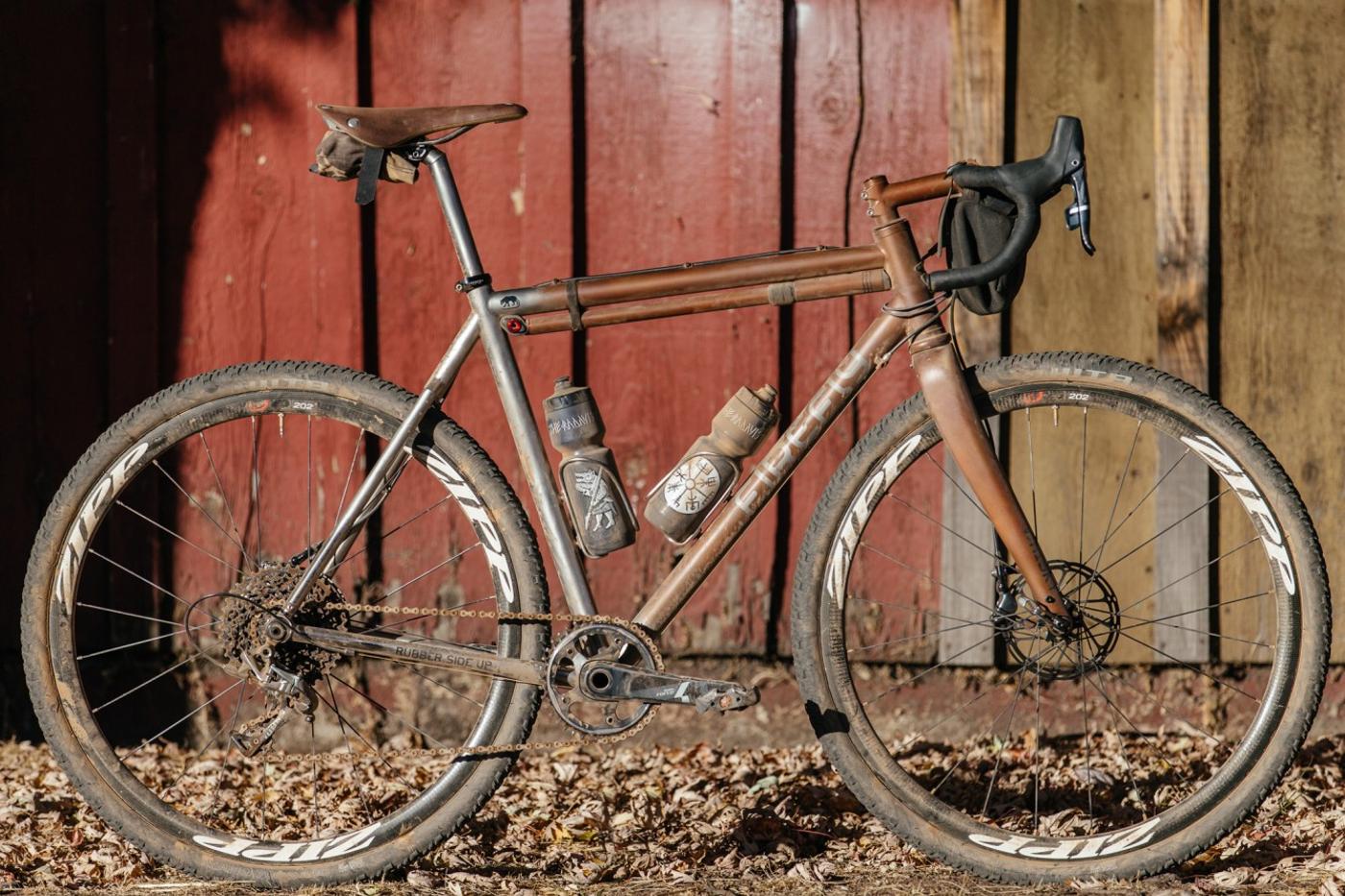 This one broke my savings account, luckily I had disc brakes and my hands weren’t sore after the fact.

“Cycling is an experience that should continue to mature overtime. I’m weary of people who stand firm in their ideologies, rest on laurels and refuse to embrace the “new,” especially when it comes to riding bikes. Look, it’s not that hard to have fun. Opinions can change with experience, its normal. Embrace it.

You see, I knew I wanted a Firefly. I kind of felt like that brand and my own brand have grown together over the years. When Jamie, Tyler and Kevin started the company, it had a breath of energy, creativity and their final products all expressed experimentation. Those guys can make anyone a dream bike but deciding what kind of bike is a challenge. Part of my apprehension was not only where I felt like cycling’s technology was heading, but where my own riding would be taking me over the next few years.” 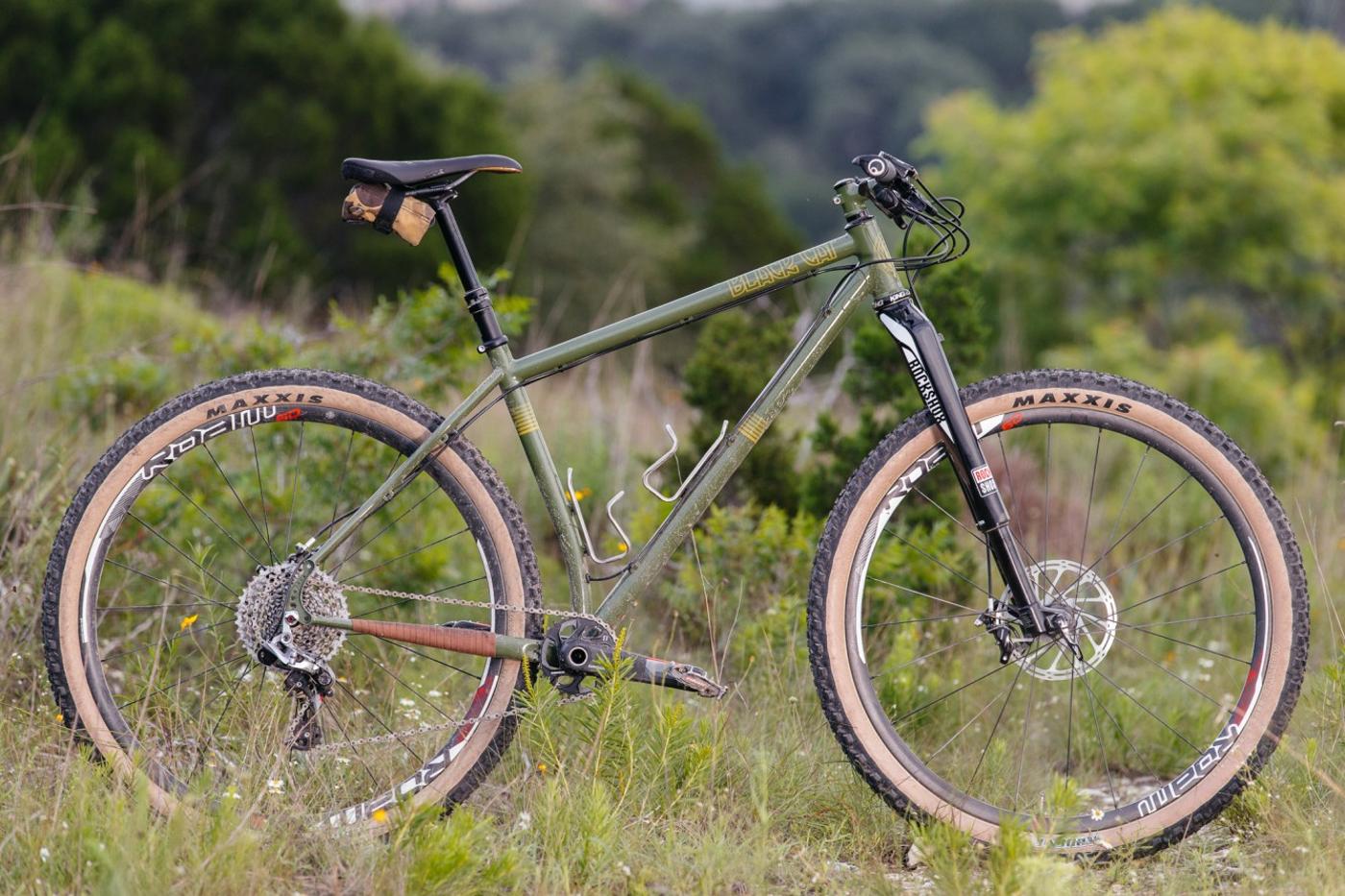 Black Cat was the only builder to get two hits on the top 10 list. I wonder why? Oh yeah, his bikes are amazing!

“Todd from Black Cat Bicycles knows a thing or two about mountain bikes. Living in Santa Cruz provides a more than ideal testing ground for everything related to dirt. Over the years, he’s dialed in the geometry on his hardtails and recently, this process culminated in what he’s dubbed the Thunder Monkey.

A few months back, Todd emailed me asking if I wanted to review a production bike he was making. His description was right up my alley “slack and low 29r with a tight rear end.” Some time passed and this incredible frame showed up at Mellow Johnny’s to be built up with various SRAM and RockShox products. “ 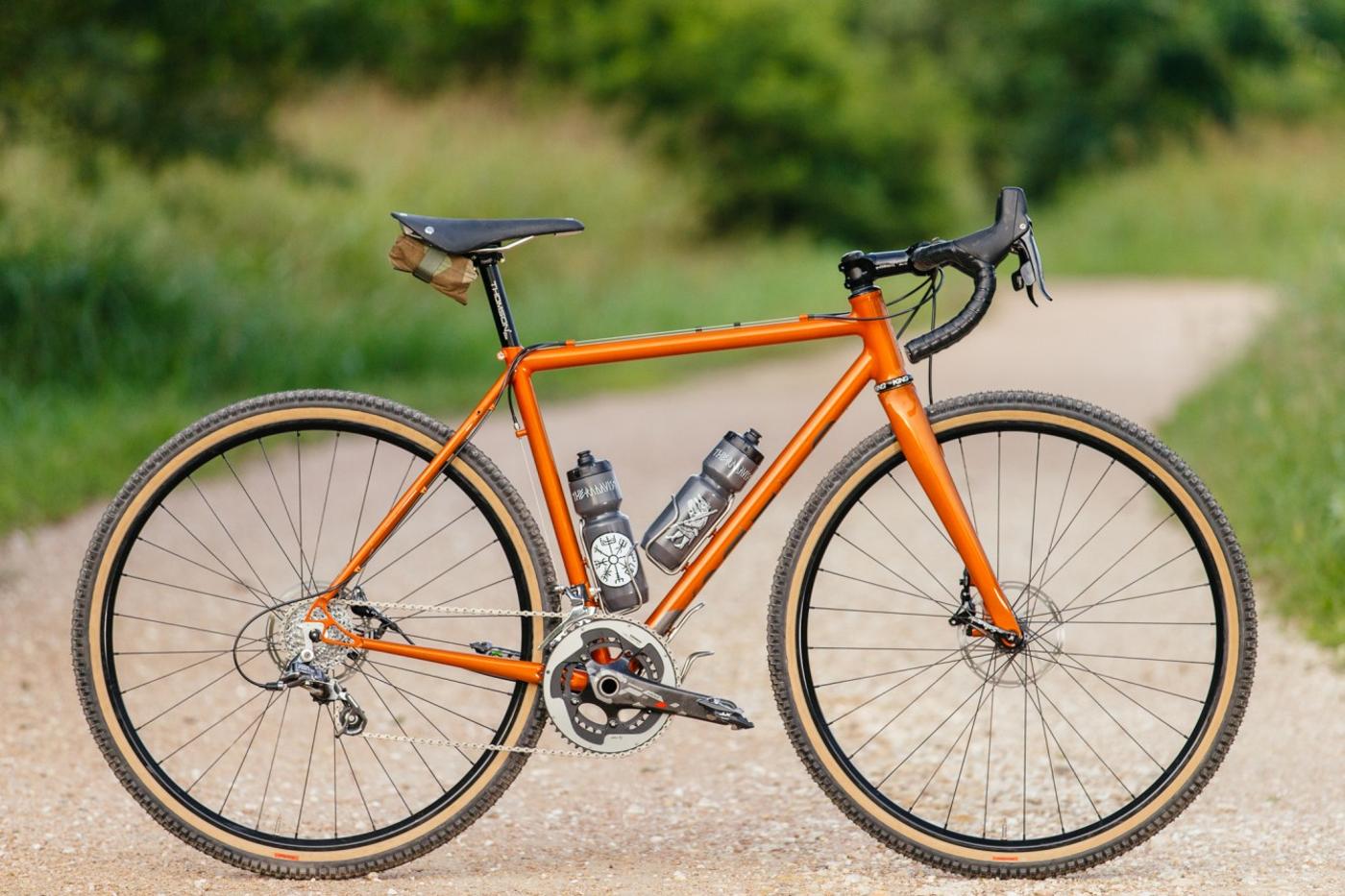 All-road, endurance road, whatever it is, just don’t call it a ‘cross bike.

“It’s not a cross bike, it’s a road bike with clearances for bigger tires. Sure it uses an ENVE disc cross fork, but the bottom bracket drop, chainstay length and angles are more in line with what many would categorize as a road bike. A road bike that likes to gobble up rugged and rutted roads.

The Bruce Gordon Rock n Road tires were the starting point for Ian at Icarus Frames to build Tyler his new all-road machine. He wanted hydro disc brakes and road gearing, which he may or may not swap out in the forthcoming months for a clutch and a wider range cassette. With a burnt orange paint and subtle Icarus branding on the downtube, Tyler’s bike has a confident stance without being overly gaudy. Keep it clean with the paint and get it nice and dirty… “ 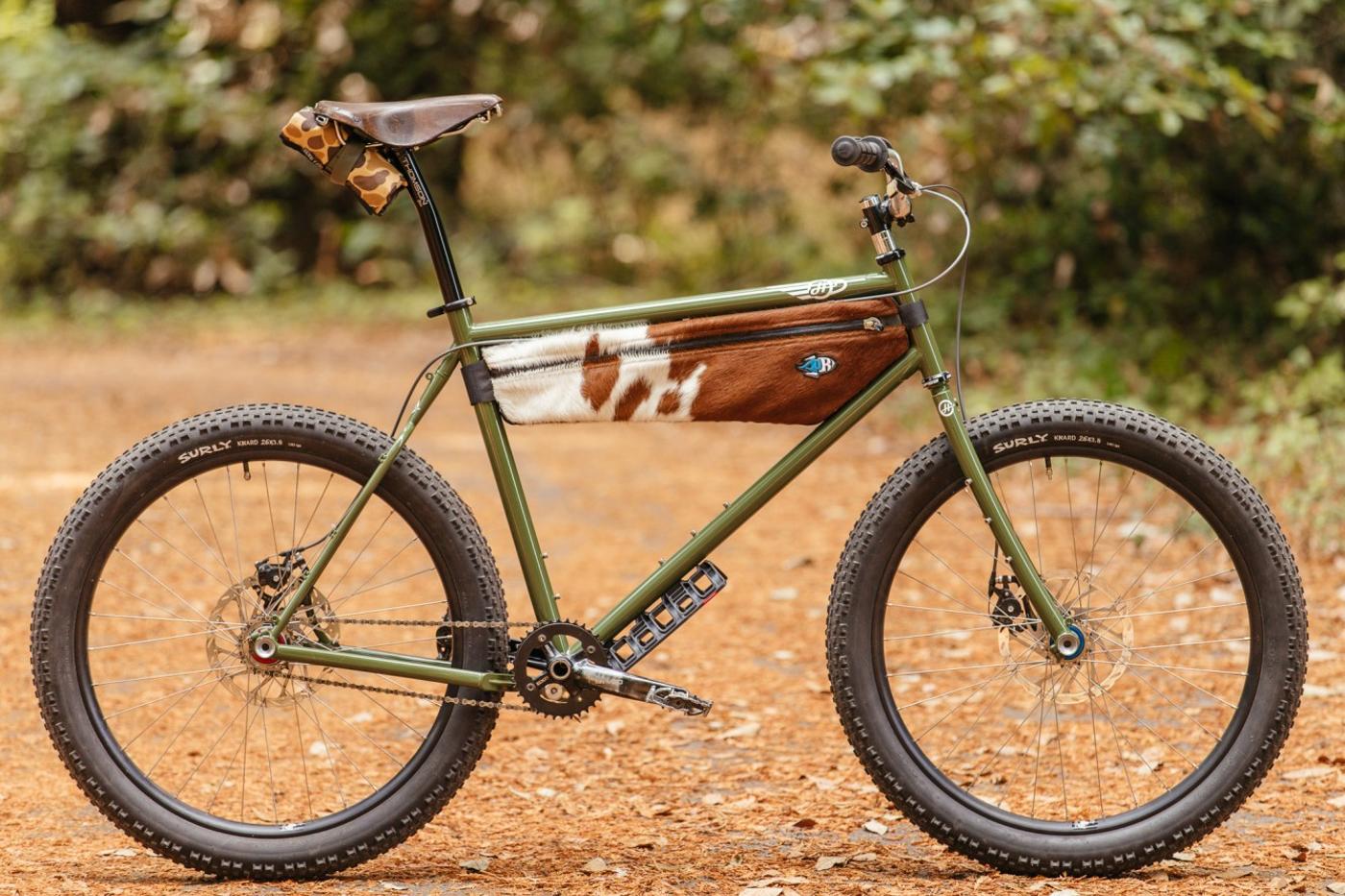 This bike was hands down my favorite to document of the year. Just look at it! But don’t get too close to the Hunter Cycles Bushmaster…

“Holy shit. Where do I even begin here? First off, we just saw where Rick Hunter builds his frames in Bonny Doon, just outside of Santa Cruz so we have context. Second off, the name of this bike is one of the deadliest vipers on Earth, the Bushmaster. These snakes are capable of multiple strikes in milliseconds and will deliver a fatal amount of venom without blinking an eye *snakes don’t have eyelids.*

Multiple strikes, multiple gears. No, wait. This is a singlespeed, right? Look again.” 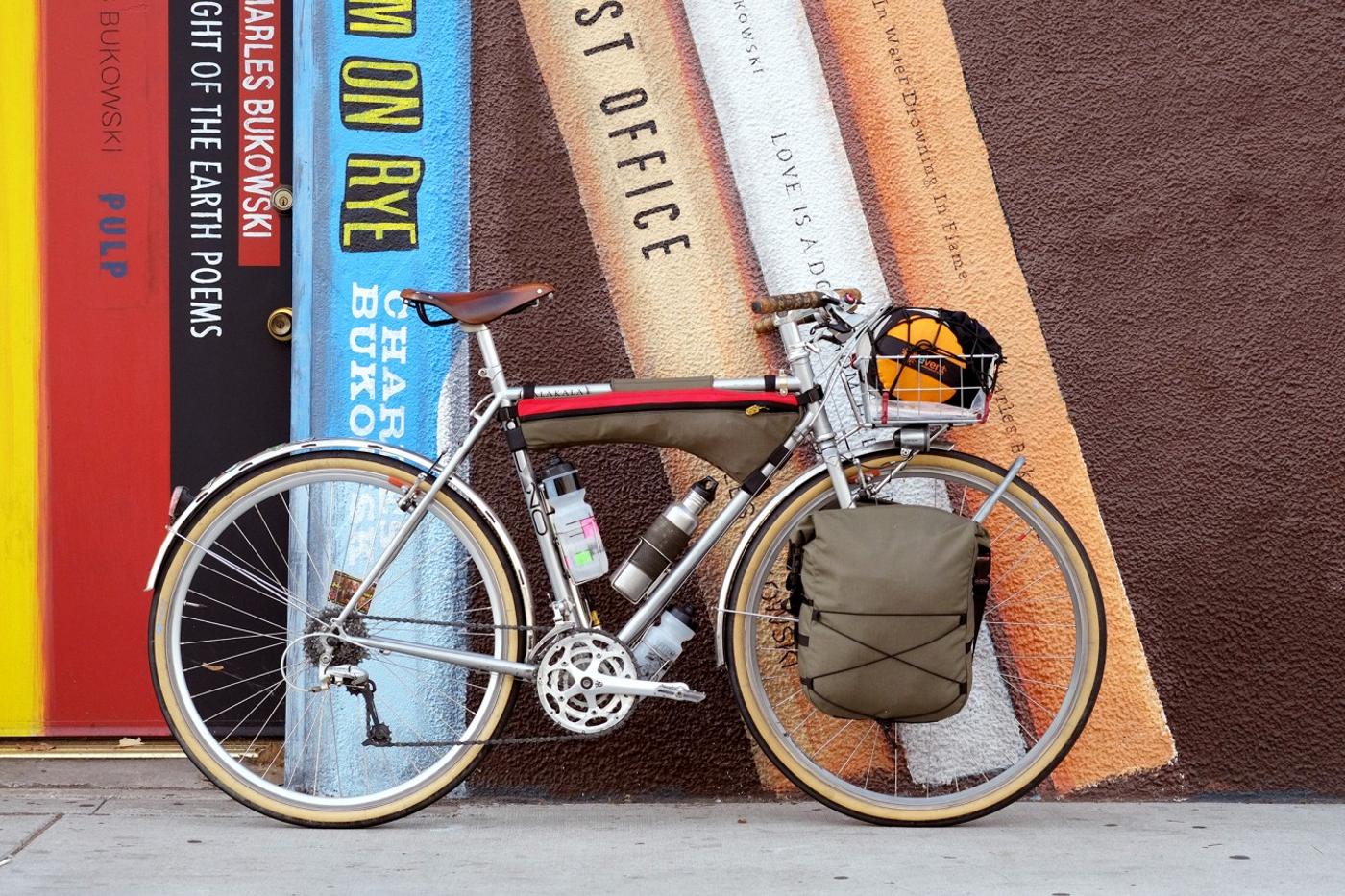 This bike, like its owner, has quite the story!

“Whitney’s 20/20 Cycle Kalakala is purpose built and can be configured to handle just about any bicycle tour you could imagine. Complete with DFL Stitchworks bags. This bike has never had a place to call home, Whitney has been riding it around the world for the last couple years and with that in mind I had no question about its ability to make it over the mountains I call home and to the Southern California High Desert that I love. Since photographing this bike it’s changed only ever so slightly with the addition of one more National Park badge to the fender, Joshua Tree.”

New builders talking about their bikes and documenting them in an unprecedented manner. No wonder this Imshi Cycles shook the internet!

“Just over a year ago I began a multi-month frame building “class” with Bryan Hollingsworth (Royal H). He taught me the basics of brazing and then we set to work building myself a frame, one night a week kinda deal over at his shop. I had a jig already so I was able to do all the filing/fit up/lug carving at home, then bring stuff in to braze with Bryan. At the same time, I also had the privilege of having a friend in Mr. Nao Tomii, who showed me my way around a fillet. Between the two of these guys, I had some of the best guidance you can imagine for both lug/fillet frame construction. They taught me everything I know…” 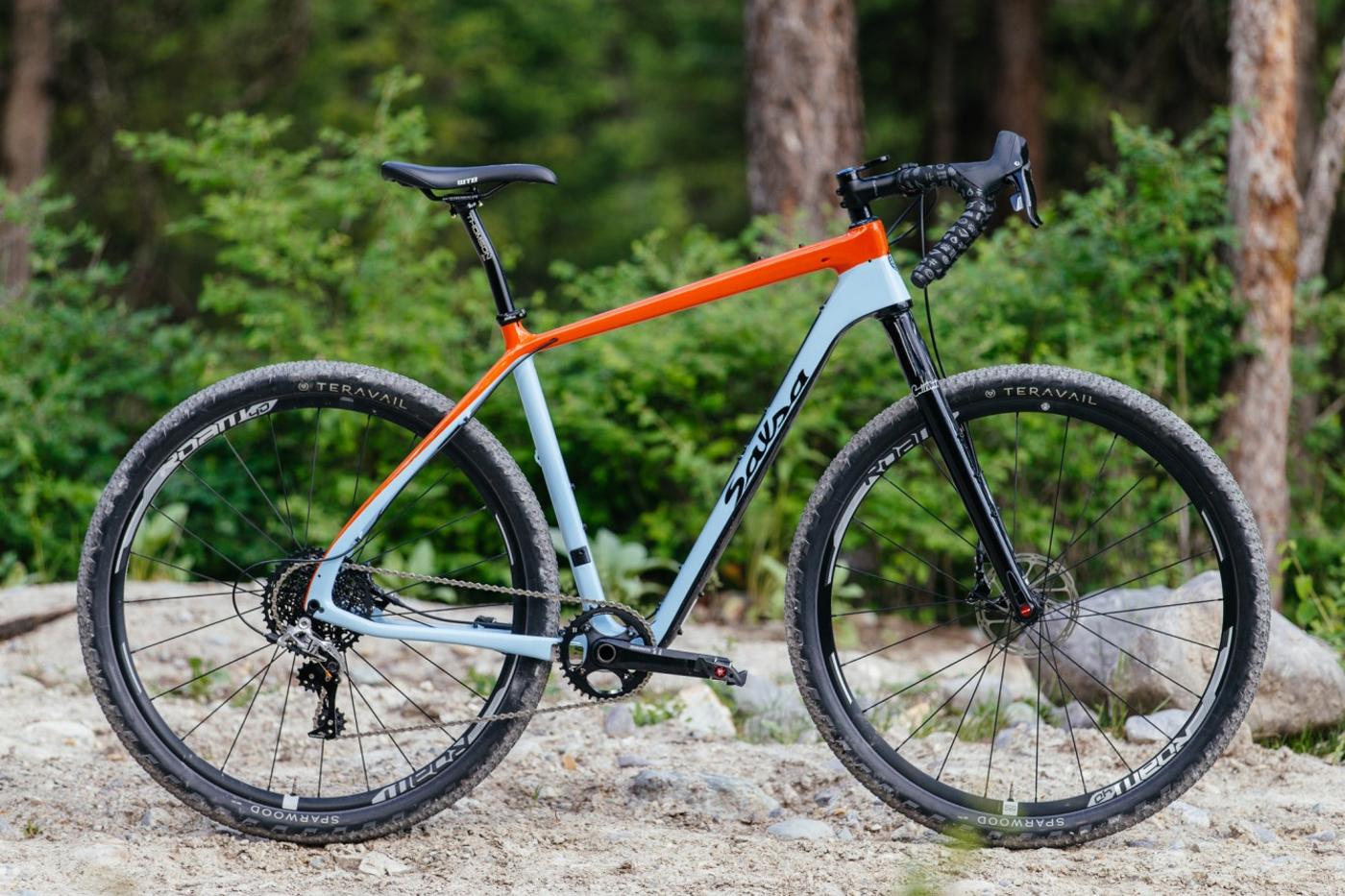 “Salsa perfected what is arguably their best “all-road”, dirt-tourer: the Cutthroat.
This bike was an exercise in both engineering of materials and design features for the ever-increasing, high demand sport of “adventure touring and racing.” For starters, it’s a completely new carbon fiber frame design, with each tube having a unique profile. The rear triangle utilizes a Class 5 Vibration Reduction System like the Warbird. What does that mean? All you need to know is that supposedly the stays, in combination with the thru-axle creates a “spring like” feel on rough surfaces. The seat stays are long and narrow, while the chain stays are wide and flat. This gives compliance when needed.” 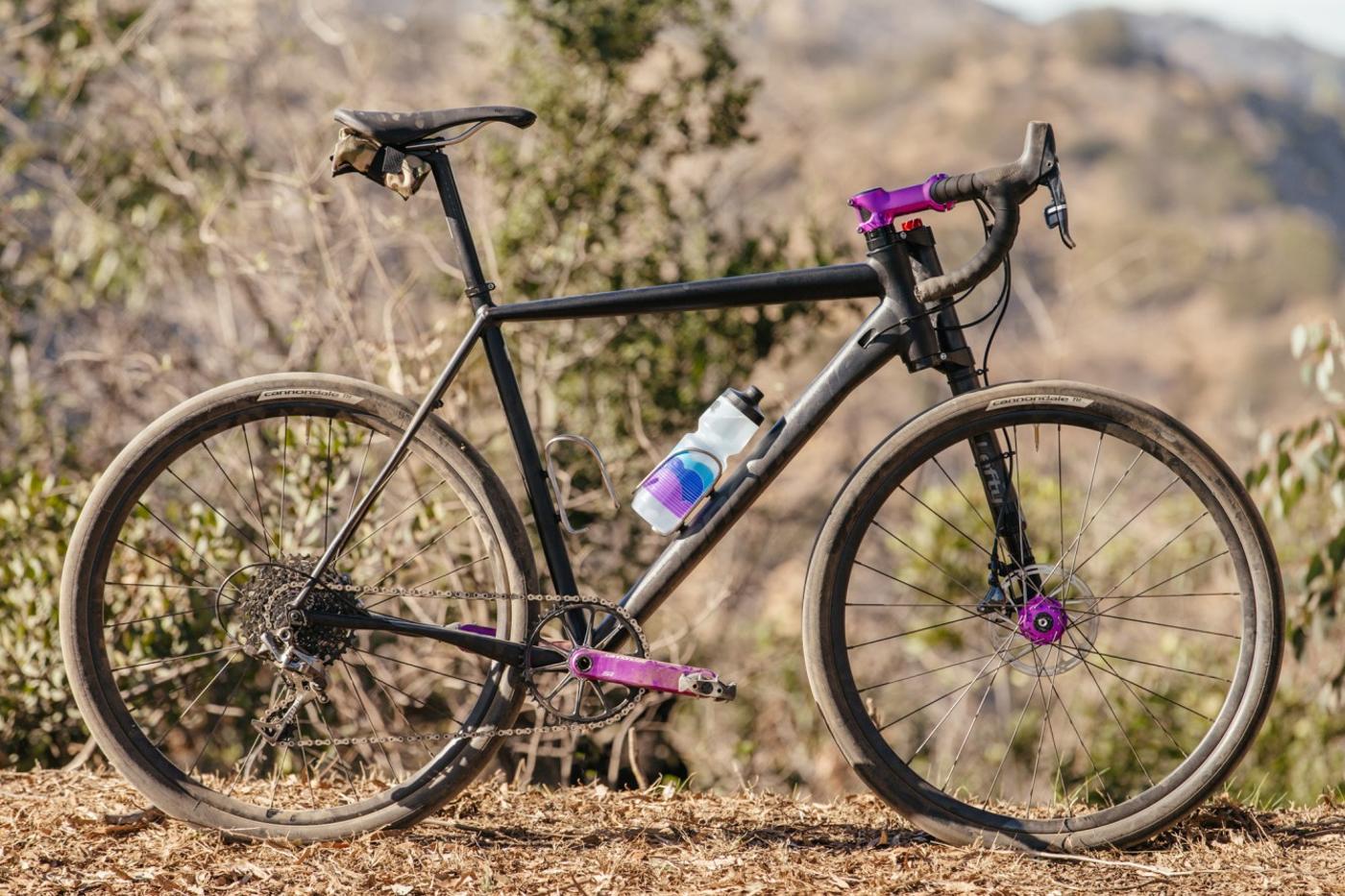 “Since relocating to Los Angeles, a land with endless dirt in both the fireroad and track variety, my preferences have shifted a lot in terms of what I want a bike to take on. Capabilities are often grown in the industry piecemeal, then once and a while, a bike comes along that asks a question: what if?

The Cannondale Slate is a what if bike. What if 650b or 27.5″ wheels with a 42mm tire makes more sense for “all-road” riding? What if a damn Lefty shock with just the right amount of travel can instill confidence in new riders while offering an added fun bonus to experienced athletes?”

“Ted King is technically still a pro, until January 1st but yesterday the two of us took off on a ride into the ANF. The last time Ted got to experience Highway 2 was in a peloton during the Amgen Tour of California, which as Ted so gracefully put it, was very, very painful. Luckily pain wasn’t on our agenda yesterday. Instead, we took a super casual pedal up to Mount Wilson and back down to Mount Disappointment. ” 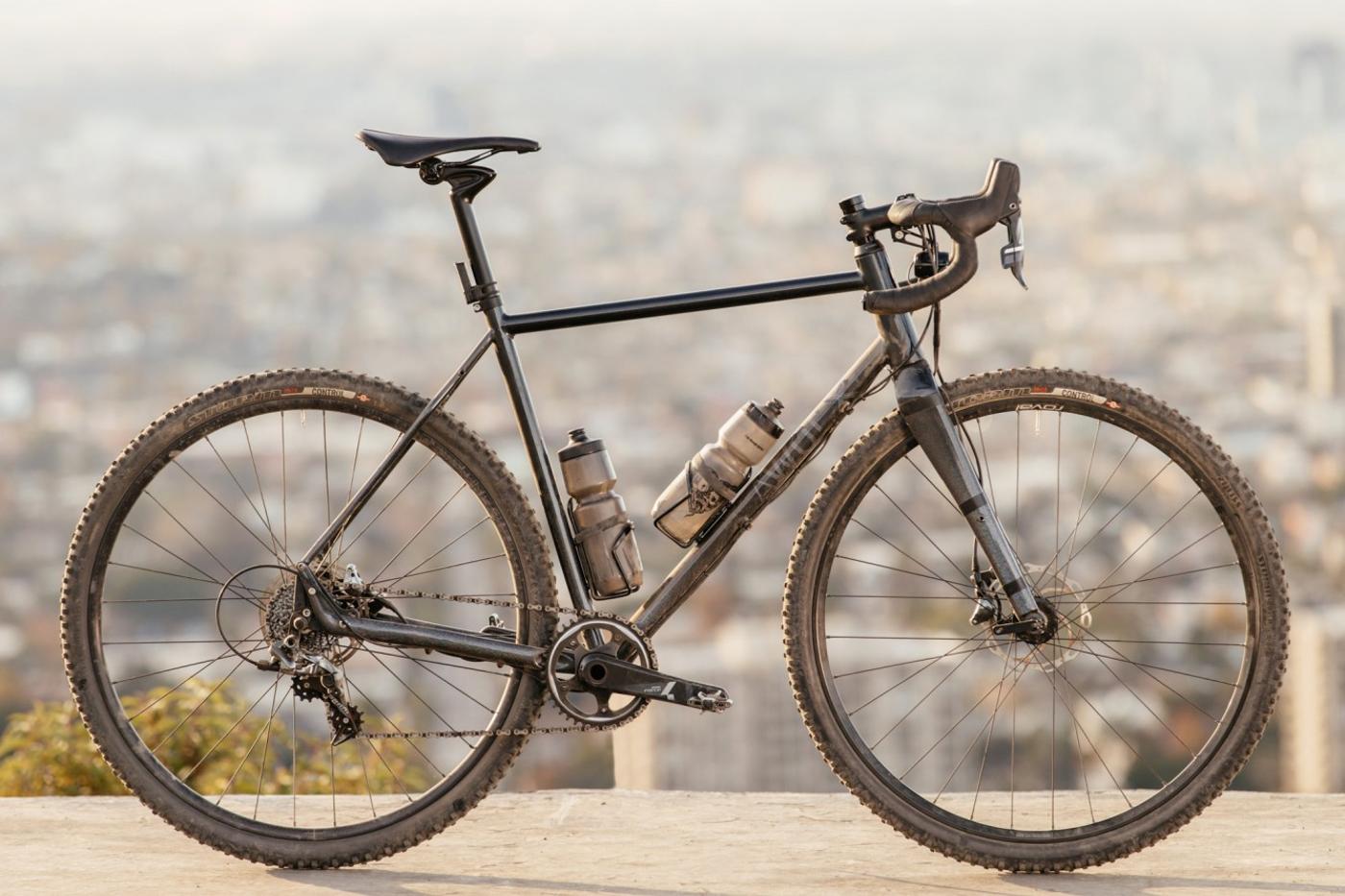 “If a beast were to crawl its way out of the Abyss, only to find itself mutated into a two-wheeled, human-powered machine, it might look like this thing. When I first saw it in person, with the Supernova light dangling from the stem, I was reminded of a Deep Sea Anglerfish. A fish that spends its life in complete darkness, only illuminating its path with a luminescent organ called the esca at the tip of a modified dorsal ray. Could that be this bike’s spirit animal?

Erik works at the big, bad S. He’s a designer for the AWOL and other excursion-oriented bicycles. He made this bike as a special project for his plans on taking on the SF-area’s Super Brevet Series. Initially, he wanted a bike that would fit a 45mm slick 700c tire, with a tighter geometry than the AWOL and a tapered headtube, mated to a carbon fork. He spec’d the main tubes from a stock AWOL with the geometry more like a cross bike, milled a head tube to spec and used a Secteur fork for its rack attachments. While the AWOL is a dedicated touring bike, this is closer to a light-tourer or randonneur. So, in short, this is a one-off custom, made in the USA bike that gave Erik the ability to test out a few concepts.”

Thanks to all of the frame builders out there, putting out exceptional work and the customers who keep those men and women in business. Keep rockin, y’all!