First Time’s a Charm at the Steamboat Ralleye

A few months ago James Scriven from Niner Bikes reached out and asked me to go on a bike ride with him. I agreed as soon as he asked and only afterwards began to understand what I had signed up for. As the details trickled in I found out that I wouldn’t be riding my own bike, but instead would be on a Special Edition Niner RLT. The bike would be auctioned off after the ride to benefit the International Mountain Bike Association. I wouldn’t even be using my own gear. The bike would be equipped with Blackburn bags, Big Agnes was providing the camping gear and Kitsbow even made a special pair of custom jean shorts for me to wear. Side note: my signature model can be expected to appear sometime in the year 2020. It wasn’t just the bike and gear that would be new to me, but the terrain and the riding company as well. The route was conceived by Colin Pinney, a long time participant and organizer of the Winter Ralleye series out of Fort Collins, CO. Inspired by some friends of his that ride from Fort Collins to Steamboat every year, Colin pieced together a route on the less traveled gravel roads of the Colorado mountains and the Steamboat Ralleye was born. The dates of the first ride coincided with Niner’s launch of the new RLT and the rest was history. Just kidding, this is still only the beginning.

A good friend of mine got married the night before I left for the Steamboat Ralleye and after a full night of partying I was still tipsy as I boarded my 6am flight. When the plane touched down in Denver I immediately began the second leg of my journey to Niner headquarters in Fort Collins, where I would be united with my bike for the ride. I won’t lie, I was feeling pretty worried about getting on an unfamiliar bike and riding it for a few hundred miles in the Colorado backcountry, but the RLT was designed in Colorado for exactly the kind of riding we’d be doing. I brought my own seat and pedals and just hoped for the best. 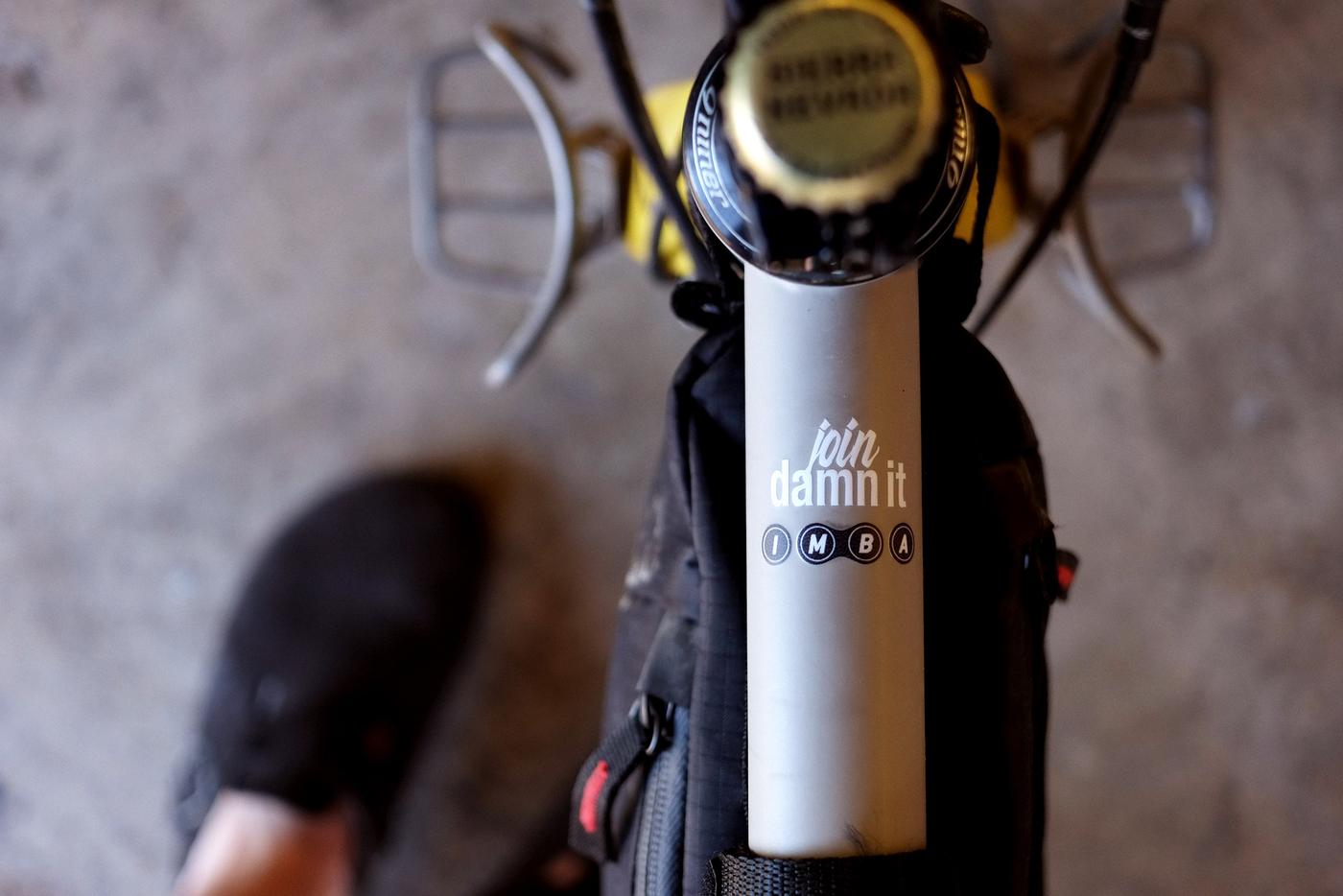 It was at that point that I started to wonder if I should have asked for more details before signing on for this ride. As I looked at the unfamiliar bike and gear the challenges of diving into something unprepared began to emerge. The small front triangle on the size 50 RLT made it difficult to utilize the full potential of the frame bag provided by Blackburn and the bag itself pinned my water bottle to the bike so that it was impossible to access while riding. The bike didn’t have a rear rack or panniers which presented another challenge in packing. I decided to carry only the Big Agnes tent and rainfly, leaving behind the camp chair they provided, and paired down my own gear as well. I brought only the clothes on my back and left my rain jacket behind. A decision that I attribute, at least in part, to the foggy mind I still had from the night of partying beforehand. Once the bike was finally packed and I was shuttled to join the ride I was only 8 hours late. I was immediately welcomed into the group by Colin, who issued a mandatory safety meeting. We’d never met and he wanted me to know what was in store for the rest of my ride through the backcountry of Colorado. It was a quick ride into Red Feather Lakes where we stopped at Potbelly Restaurant and Lounge. Some of my earlier concerns about the ride began to melt away as whiskey, beers and pot roast filled my belly. It was a false sense of comfort though because I soon found out there was still another 1,000 feet of climbing, at 8,000 feet of elevation, to get to camp for the night. The two nights of back to back partying took their toll on me and I missed breakfast the next morning. It was only by the kindness of James sharing a Colorado style empanada that I was able to make it up Deadman Hill at just over 10,000 feet. Most of the second day was spent above 8,000 feet and that was no joke for a guy that lives at sea level. I was riding outside my comfort zone all day and continued to fall back through the ranks. That did provide the opportunity to get to know everyone in the group, but to be honest, my body and mind weren’t working at normal speed and I wasn’t retaining much of anything anyone said. 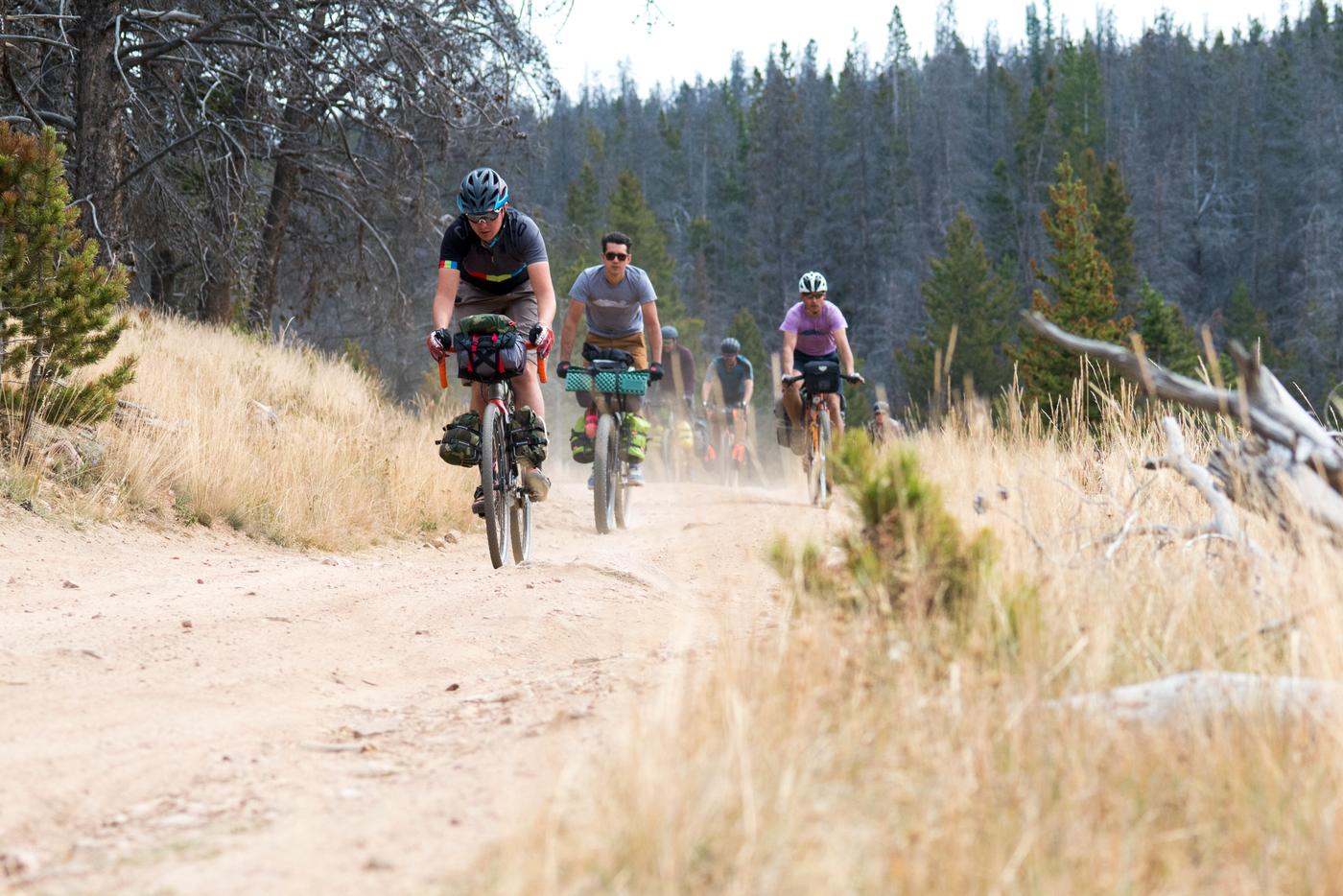 Halfway through that second day a ranch in the middle of nowhere provided some respite. They gave us lunch and the best lemonade I’ve ever had. It was necessary fuel for the big climb into Walden, where we’d be stopping for the night. The first part was tough, but rewarded us with a beautiful ridge road overlooking valleys to the left and right. The second part of the climb was harder, requiring me to walk in places, but the reward was an 18 mile dirt road descent into town. Well, it was supposed to be an 18 mile descent. Instead we hit a dead end and had to reroute. We were motivated to get into town before last call and opted for the pavement to lead us to the bar.

And then the rain came. Lots of it. We tried to wait it out at the bar but they eventually kicked us out and we made our way to the town park where we planned to stay. The rain was coming down even harder at this point and I wasn’t feeling excited about setting up camp in it. In a moment of mixed desperation and ingenuity I found a gazebo. It came equipped with electrical outlets, two picnic tables and shrubs high enough to block the wind. It was heaven. Myself and a couple guys threw on some tunes, setup our beds and proceeded to party from the comfort of our covered shelter. It wasn’t long before the rest of the group caught on and joined us. Our spectacular clubhouse was christened the Walden Yurt. Glamping at it’s finest. 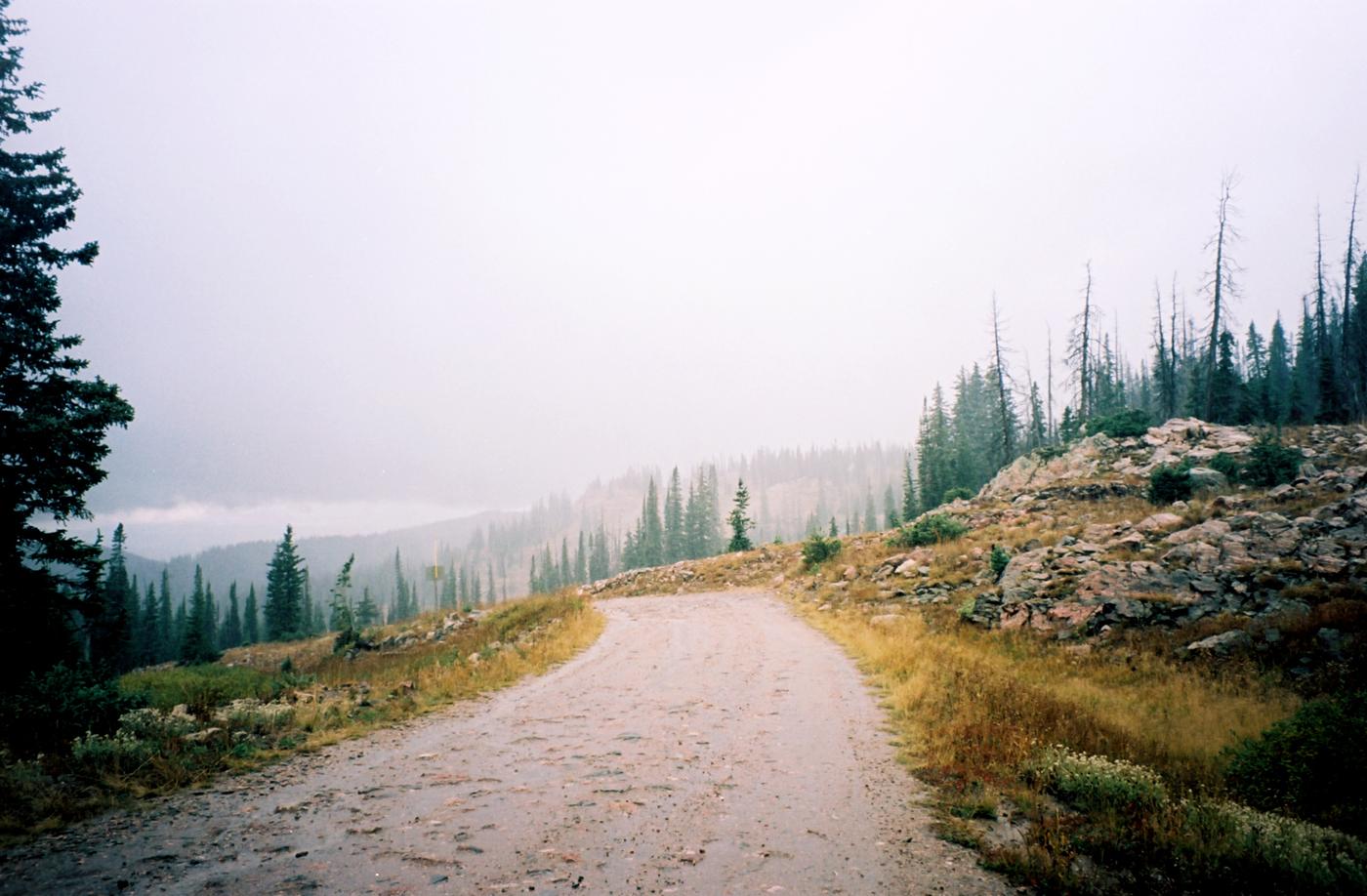 The next morning was sunny in Walden, but things didn’t look as promising in the mountains that stood between us and Steamboat. The 40 miles to Steamboat began with 20 miles of rolling valley and a ridiculous headwind. As we approached Buffalo Pass the sky looked more and more menacing. It wasn’t long before our headwind became driving rain. Buffalo Pass wasn’t the hardest climb of my life, but with absolutely no muscle recovery for days it might as well could have been. This seems like a good time to remind you, I left my rain jacket in Fort Collins. Luckily I had a packable Ringtail jacket and I think it saved my life. By no means was I dry, or even warm, but I was in way better shape than I would have been without it. The front side of the pass was gradual and smooth, but at the summit everything drastically changed. The rain turned to hail, temperatures dropped even lower and there were rocks everywhere in our path. All I wanted was to be down the mountain. My hands were so numb I could barely work the hydraulic disk brakes and I knew I would be unable to change a flat so I was forced to take it easy. I stopped to put on every single layer I had, took a few pictures and carefully made my way to town. 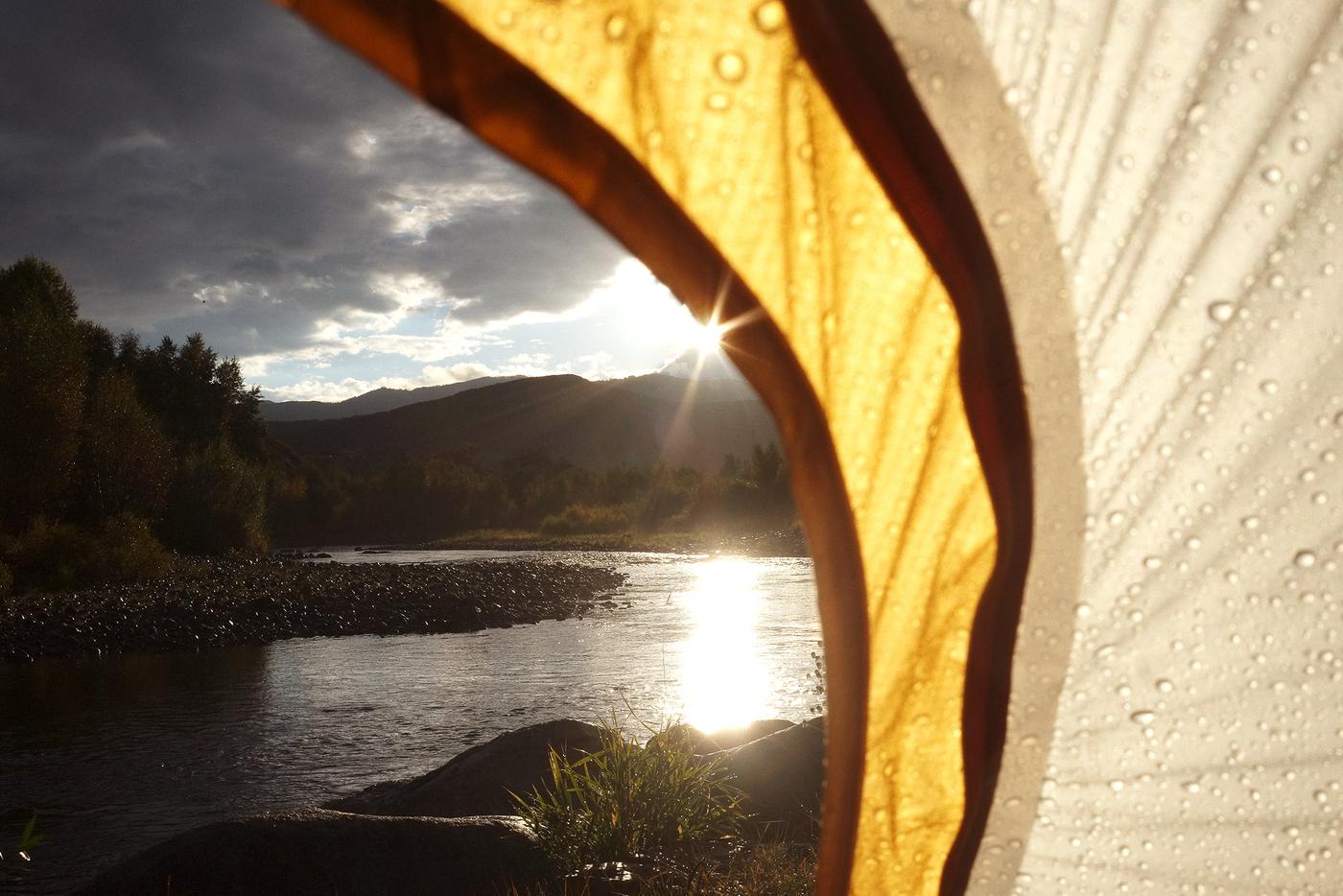 Just as we arrived the clouds parted and the sun was shining. We rendezvoused on the main street in Steamboat and headed straight to BBQ, whiskey and beers. We heard another storm was rolling our way so we decided to head towards camp to setup the tents while the weather was still fair. We found a good set of dirt jumps along the way and feeling refreshed by the food and booze decided to huck the loaded bikes over a few of them. Once completely winded we pushed on to camp and were set up just as the rain began to fall again.

A few of us decided to head up the mountain to Strawberry Hot Springs for some hot water recovery. There isn’t anything that feels better to me after a long ride than a nice soak. Sitting there in the giant hot spring with the steam rising up around me and the pitter patter of rain creating the soundtrack of the night, I was beginning to feel like I was dreaming. I began to think about the ride I’d just done and the surrealness surrounding it. I’d flown into Colorado not knowing anything. Nothing of the ride, nothing of the country and nothing of the people I would spend the next three days with. Sitting on the other end of it all those things now feel completely familiar. Something about the ride just clicked for me. No one was cut from the same cloth and everyone had something to contribute. I’ve never done anything like this, with so many different people. I could wrap it all up here, on this mellow, reflective moment at the hot springs, but it didn’t end that way. The truth is, I couldn’t resist the draw of the two-step bar in town and I woke up on day 4 with a hangover I’d carried with me all the way from California. Luckily it was nothing that couldn’t be remedied by a cold swim and coffee by the river. 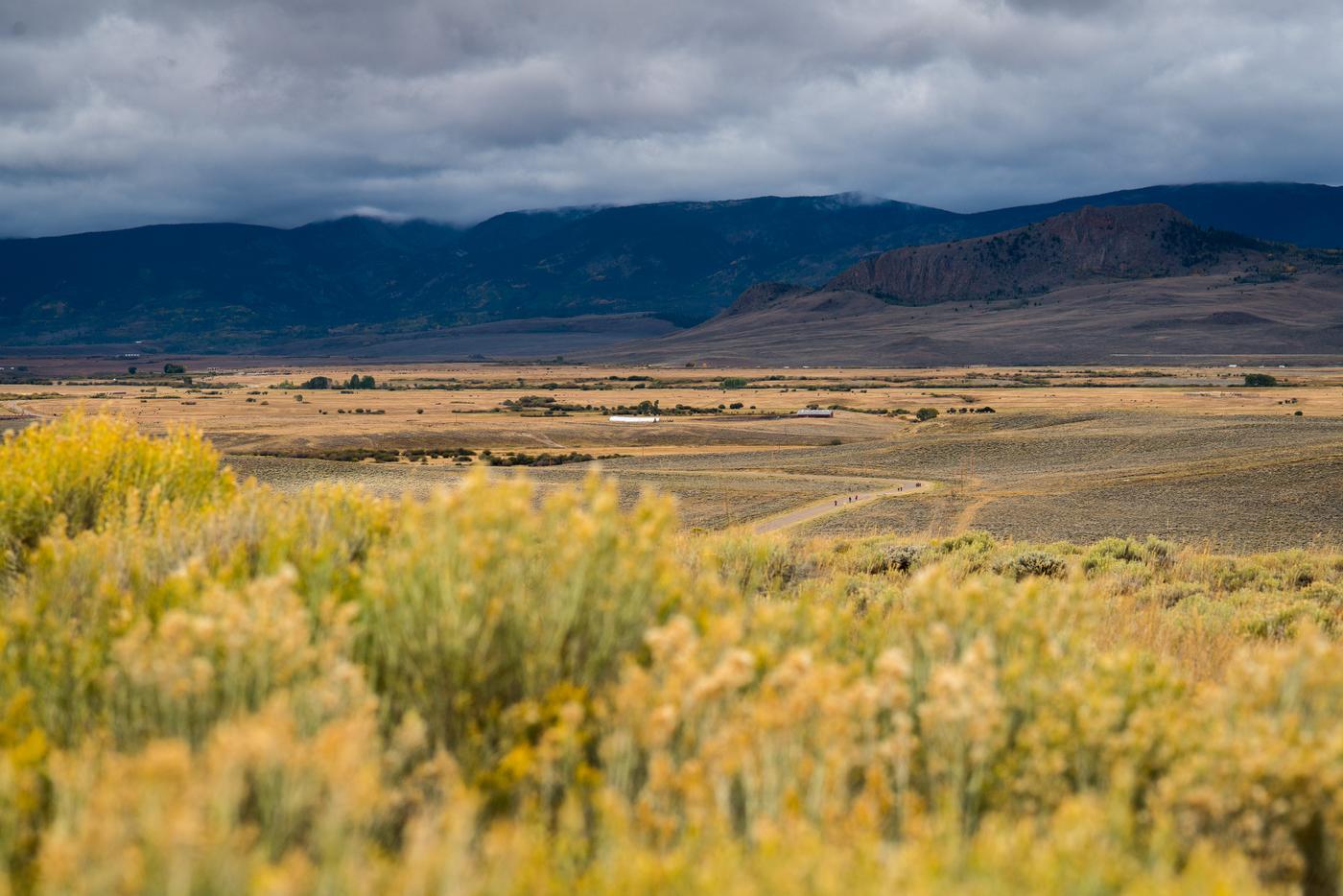 I still can’t really say if it was Colorado, the people or the gear that made this ride so spectacular, but I am positive the experience changed my life. I’ve been riding bikes in California with my friends for just about 10 years now. That will never feel old or boring to me, but what I want to seek out now are fresh experiences. I want to ride places I’ve never ridden, with people I’ve never met. I want less familiarity. I want every trip to be a trip of firsts, but boy would I love to go back to Colorado!

I also would like to extend a special thank you to the Niner crew for inviting me on the ride, Colin Pinney for organizing the Ralleye, Dillon Maxwell for putting up with my shit and all the other companies like Kitsbow, Giro, Blackburn, Big Agnes, Edgevale USA, WTB and Ortlieb who got on board and helped the folks out on the ride.