Seven Months of Shredding on the Santa Cruz Stigmata

“If Ferrari made an off-road vehicle, that’s what it’d be like to ride the Santa Cruz Stigmata.”

That’s been the simile I’ve used countless times when describing how this bike rides. In fact, I still can’t think of a better way of describing the Stigmata’s handling and capabilities.

Seven months is a long time for a review and honestly, I wanted to get this up before ‘cross season began but with very little expectations to race this season, I quickly realized that I had been using the Stigmata in every other way than it’s market intention. That’s the beauty of ‘cross bikes though, right?

Let’s step back a bit and look at what this bicycle is. 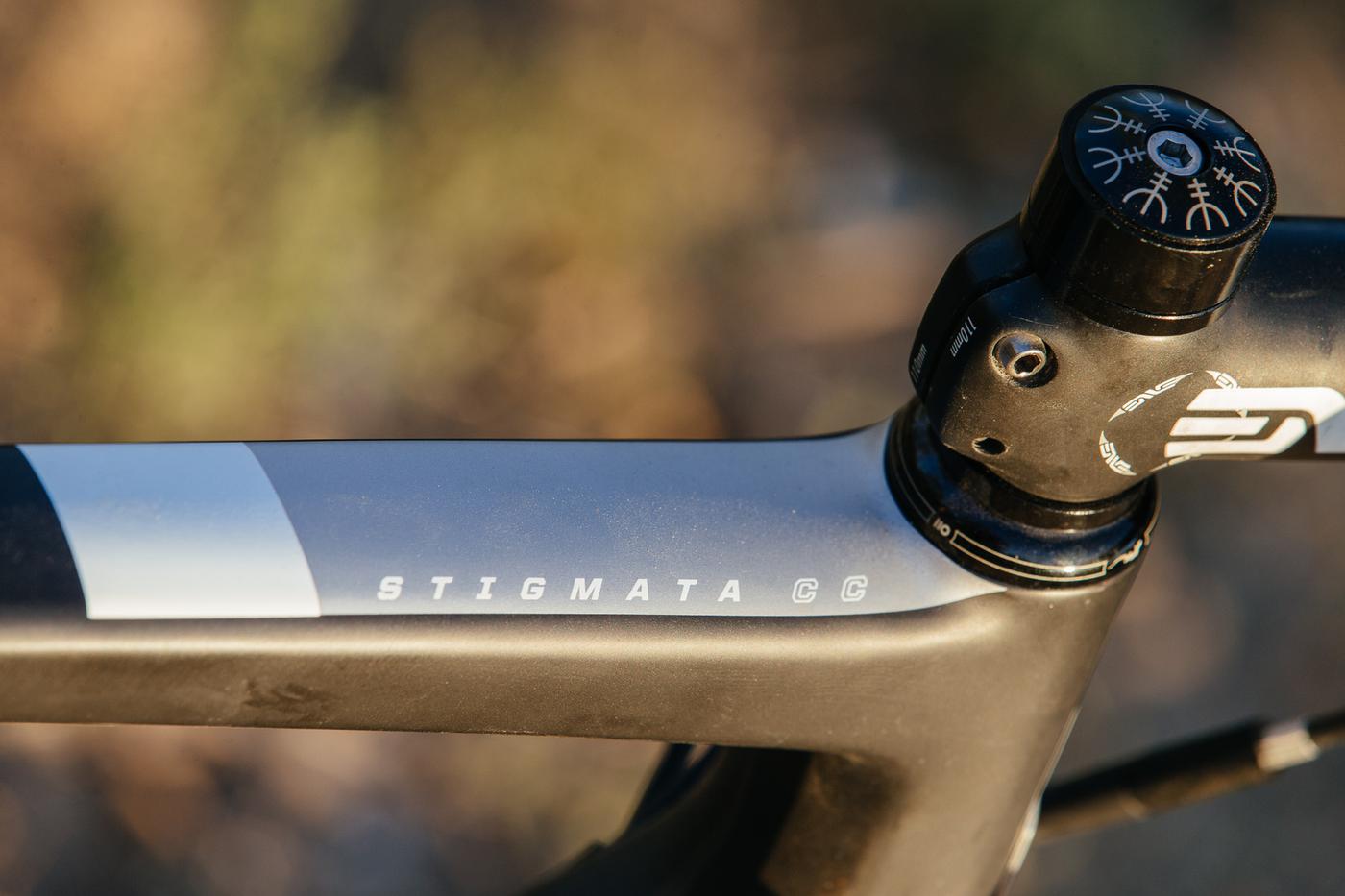 Santa Cruz Bicycles makes some of the finest mountain bikes in the industry. Their carbon fiber facilities in China produces various grades of layup quality, with the “CC” grade being the highest. When the company decided to resurrect the Stigmata, completely updating not only the technology but the geometry, they knew it had to be a veritable multi-use machine.

While they didn’t go as far to add rack or fender mounts to the frame, it was designed to be a race-ready weapon, while still being comfortable and versatile enough to take on long days on multiple surfaces. The Stigmata (can we call it Stiggy for short?) is a capable all-rounder.

Personally, I found myself primarily riding this bike on trails in Austin and shorter road rides but I’ve ridden it in the Sierras and in Portland extensively. When I was commissioned by Giro to shoot the marketing photos for Grinduro, I tackled the course on the Stigmata, with a 20+ lb camera bag. When I went to Portland for a photo show at Velo Cult, the bike followed and ended up finding itself on various road rides with, you know, guys on 25mm tires. Meanwhile, a 40mm tire was the width of choice for the Stiggy.

Since moving to Los Angeles, the Stiggy has been my go-to dirt bike. Fire roads, singletrack, hobo trails, you name it. If it’s silty, dusty and sandy, the Stigmata ripped through it with confidence-inspiring accuracy. 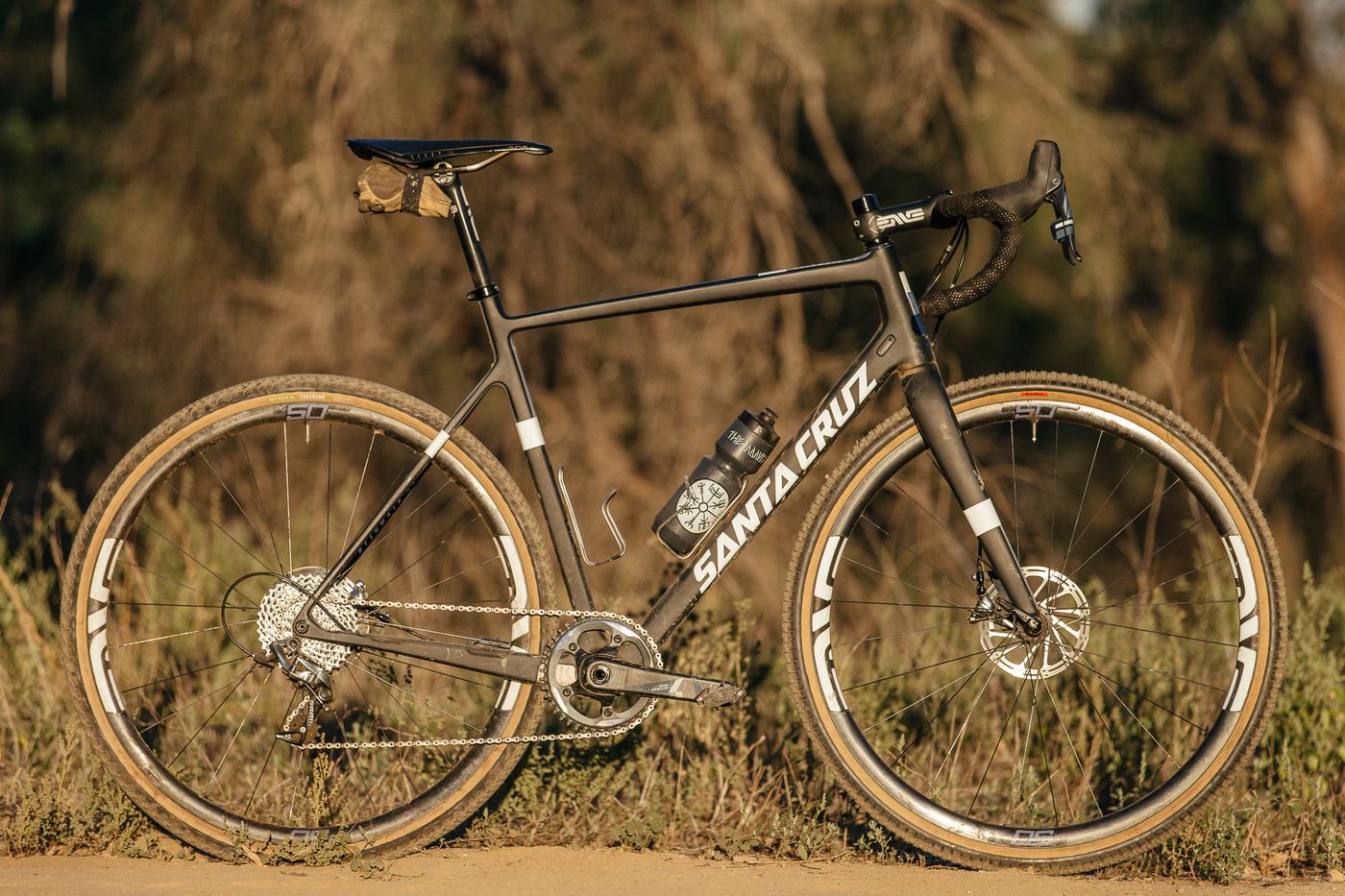 With a 72.5° head angle, a 73º seat angle, 425mm chainstay and a 69mm bb drop, you can already imagine how this bike rides. It’s incredibly stable but not in the way you’d initially use that word. It’s stable in the sense that it holds the ability to react to a disturbing force by maintaining or reestablishing position, form, etc (that’s a cut and paste definition.) In other words, if I cut left abruptly, the bike corrects itself under me immediately. Rutted fire roads often result in a last minute line adjustment and this bike relocates itself beneath you with little or no hesitation. A slacker head tube, longer wheelbase, or an even lower bottom bracket and you’d loose this zippy, whippiness. That’s stability.

In a related conversation, this geometry informed the final drawings for my Firefly, as well as its overall functionality.

Steel is my material of choice, yet as I find myself on more and more carbon bikes, particularly of the off-road variety, I’ve really enjoyed the smoothness of it. Coupled with a nice, high volume, low pressure tire, the Stigmata is one of the nicest riding bikes I’ve ever been on. Falling only behind my Argonaut road, yet I don’t baby either of those bikes. Remember, this is an off-road bike. It’s going to get scratched. Maybe chipped and maybe dented. If you take a digger on this and it hits a tree it will more than likely be ok. Until it’s not… While you don’t have to baby the Stigmata, be aware of its material limitations. 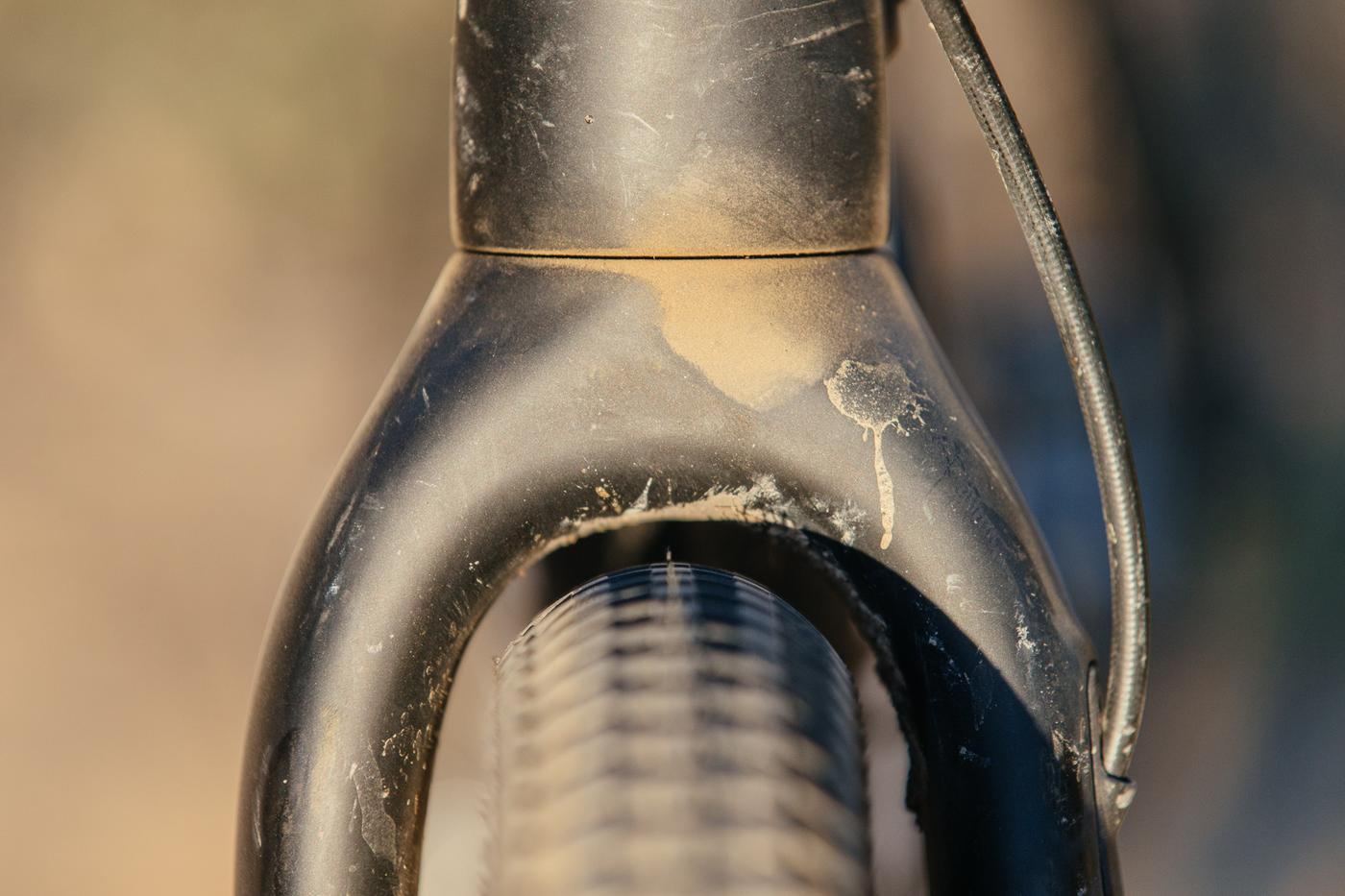 Santa Cruz claims the Stiggy will clear a 41mm tire but I’ve had luck with the 43mm Bruce Gordon Rock N Road clearing the front fork with ease, while it’s a little too wide for the rear, hence the 42mm Soma Cazadero on the rear. Sure, it doesn’t have as aggressive of a tread pattern, but it’s plenty grippy for how I use this bike. Up until last week, I rode the Stiggy exclusively on the WTB Nano 40mm tire. Yes, all of these tires have been tubeless. The RockNRoads took a little coaxing however. 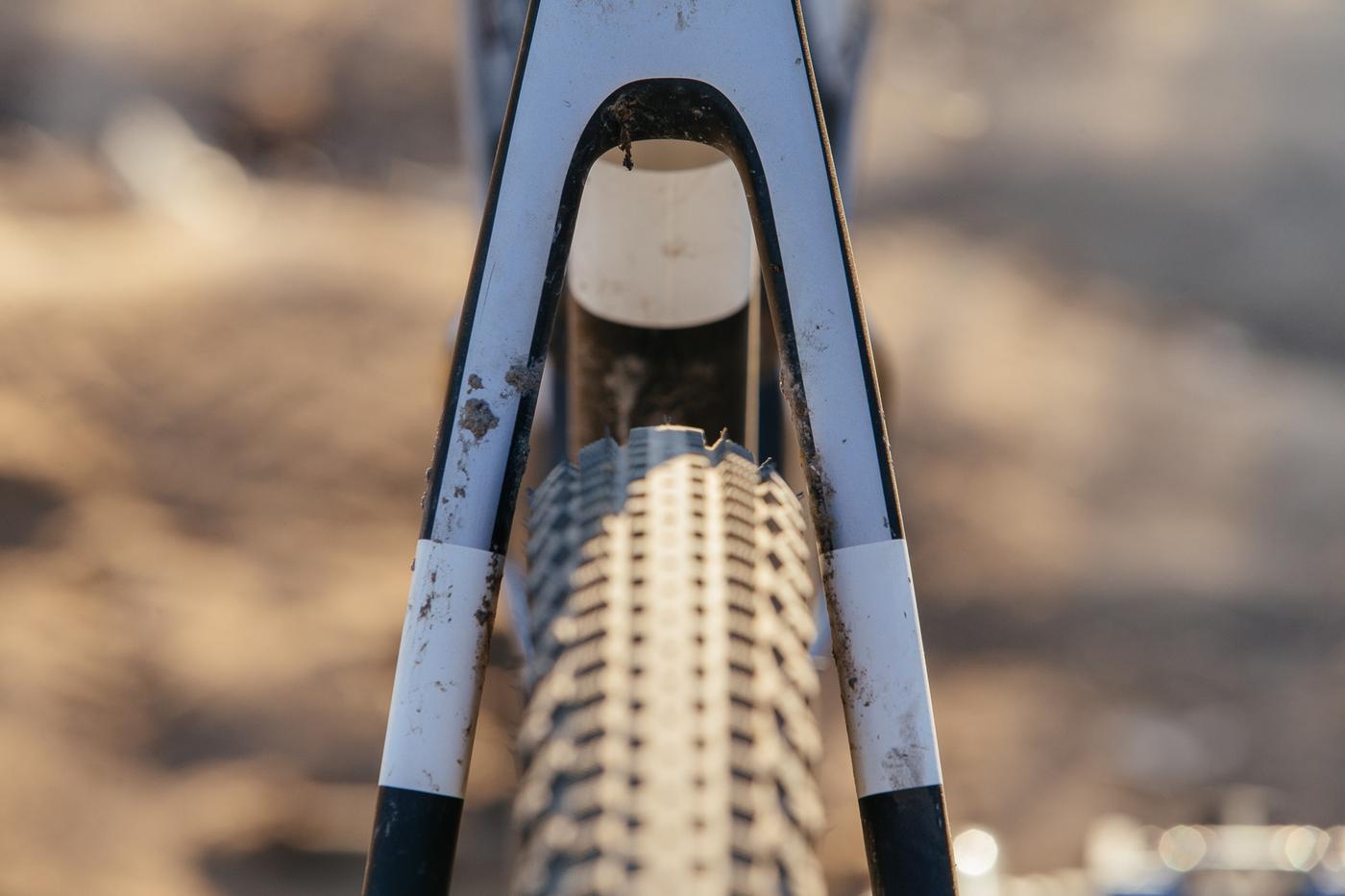 If you’re racing in muddy conditions, I’d go no bigger than a 40mm tire. Man oh man. This is my favorite detail on the bike. Thru-axle, 140mm disc rotor, internal routing, a great profile and shape. The Stiggy’s fork uses an axle-to-crown of 395mm and a 48mm offset. It’s stiff and never falters. 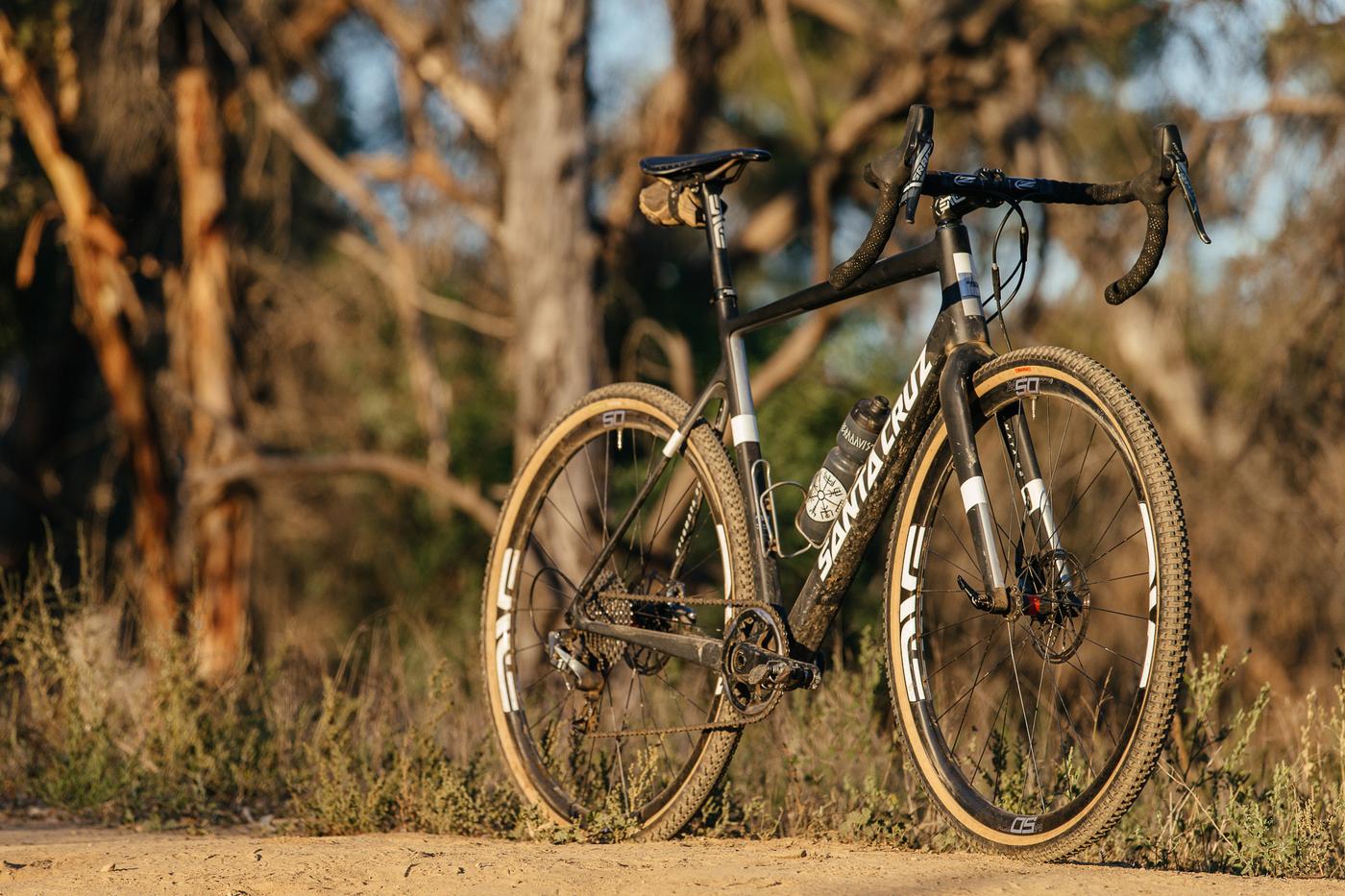 I have a confession. Me and Stiggy have gotten into some shit. Mostly super fast corners where a cacophony of rocks clanging against the downtube shook me to my soul. As you’re opening it up down a fire road like the Grinduro course, rocks are going to find their way onto your downtube. It’s a fact of riding dirt. Shit gets jettisoned in every which way.

My initial concern with this frame was the CC layup being too nice to endure this sort of abuse. On Santa Cruz’s mountain bikes, many have a rubber downtube protector in place, yet on the Stiggy, it’s bare as a baby’s ass. After a few conversations with the engineer of the Stigmata, I was assured the layup is thicker at the bottom bracket and downtube cluster for this very reason. So if you wanna go all Sven Nys on some barriers in a race and you case one on the downtube, don’t fret, you’ll probably be ok. Well, the bike would be anyway. 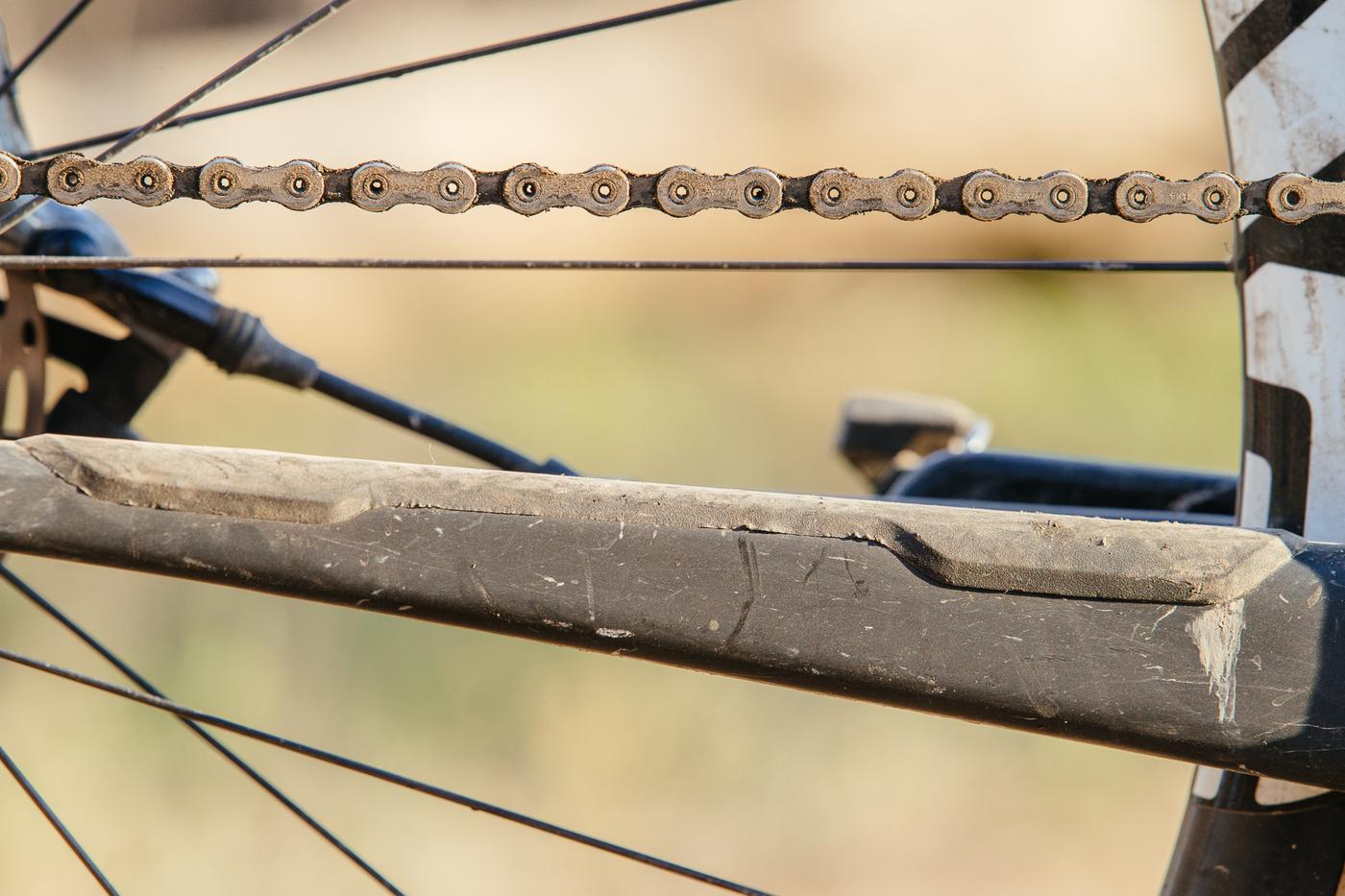 One nice feature is a rubber bumper pad on the chainstay though! 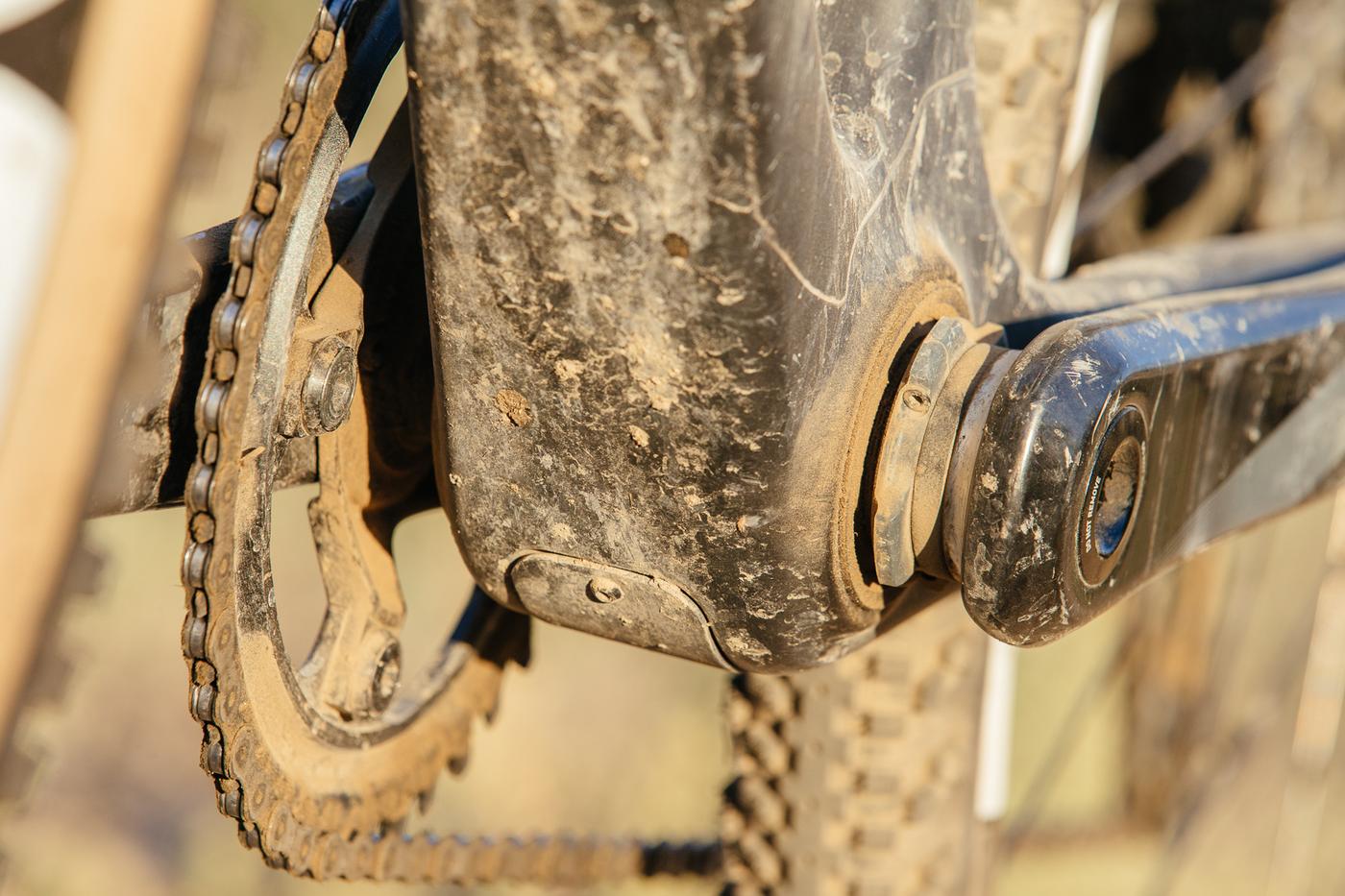 Ugh. I hate these things. So much. Yet I didn’t notice a peep nor a creak from this one at all. Knocks on wood… The PF30 shell allows the Stiggy to have some rather beefy tubes. Look at that downtube diameter! No, it’s not loud. It doesn’t rattle and it’s a cinch to work on (arguably.) The initial install of the rear derailleur housing is made easier with a feeder line and the rear brake has a molded sheath to keep it quiet in there. There’s also a hatch at the BB to assist in routing. 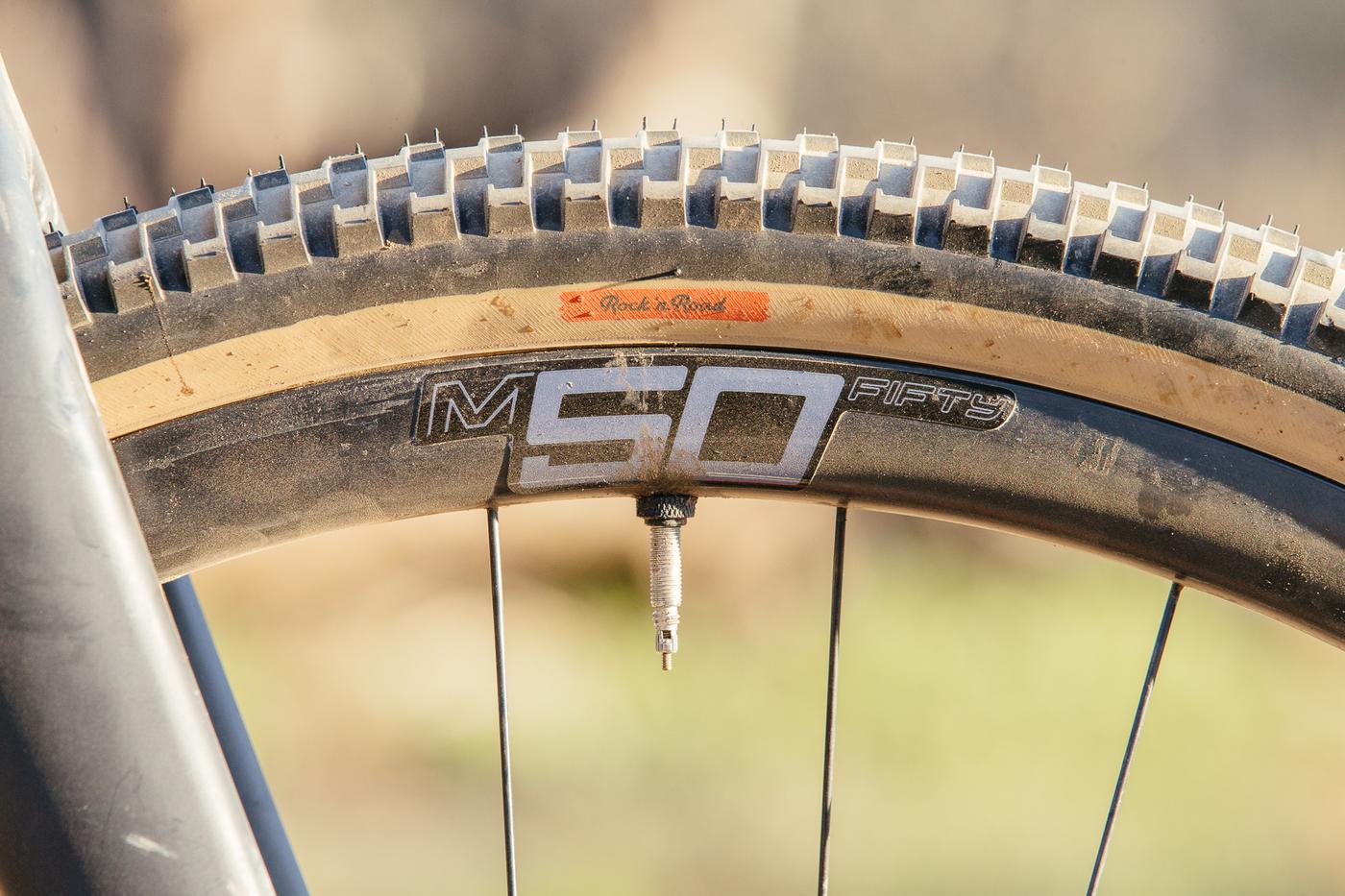 Look at this Balleur Build Kit:

The ENVE wheels are a large upgrade but the width of the M50 makes for an incredible ride quality. I’m envious of this upgrade…

The build of this bike changed my opinion of SRAM’s hydro disc system and was a no-brainer precedent for my Firefly All-Road. 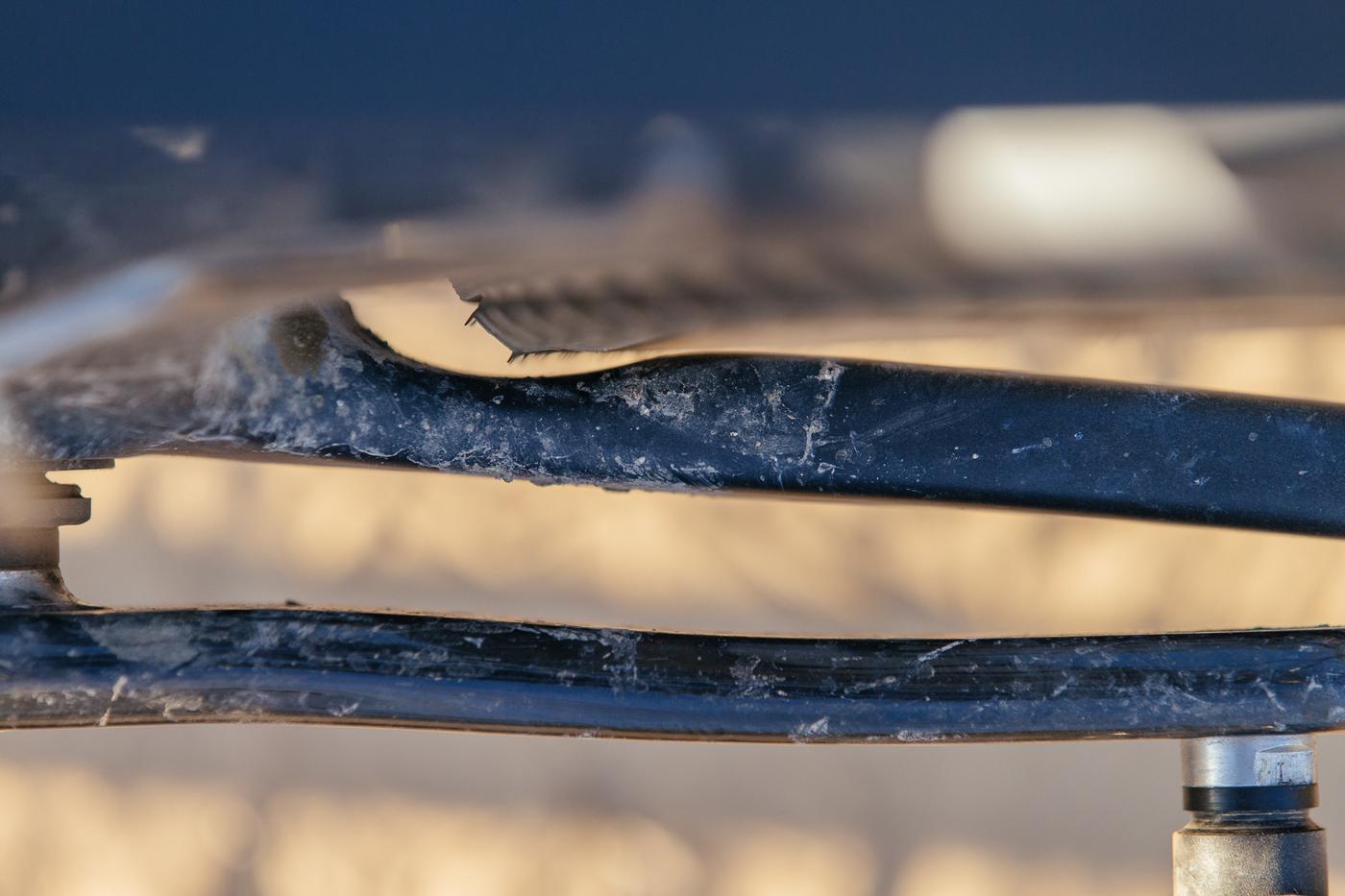 Honestly, my only qualm is the unmatched front and rear tire clearance. In my opinion, if a bike can clear a 43mm tire with tread on the front, it should have the same clearance in the rear. Granted, we’re talking a few millimeters here and let’s be honest, a 42mm tire is plenty big enough. I’m just being critical for the sake of it. For Here or Take Away:

Look, I’ve ridden a lot of cyclocross bikes. It’s kind of our thing over here at the Radavist and while I didn’t get to race the Stiggy in a actual sanctioned ‘cross race, I did race through the woods, down and up fire roads with friends. I pinned it through questionable lines, charged through sand, hopped logs, over rain ruts and even powered through steep and windy road climbs.

You don’t have to race ‘cross to enjoy a ‘cross bike like the Stigmata. 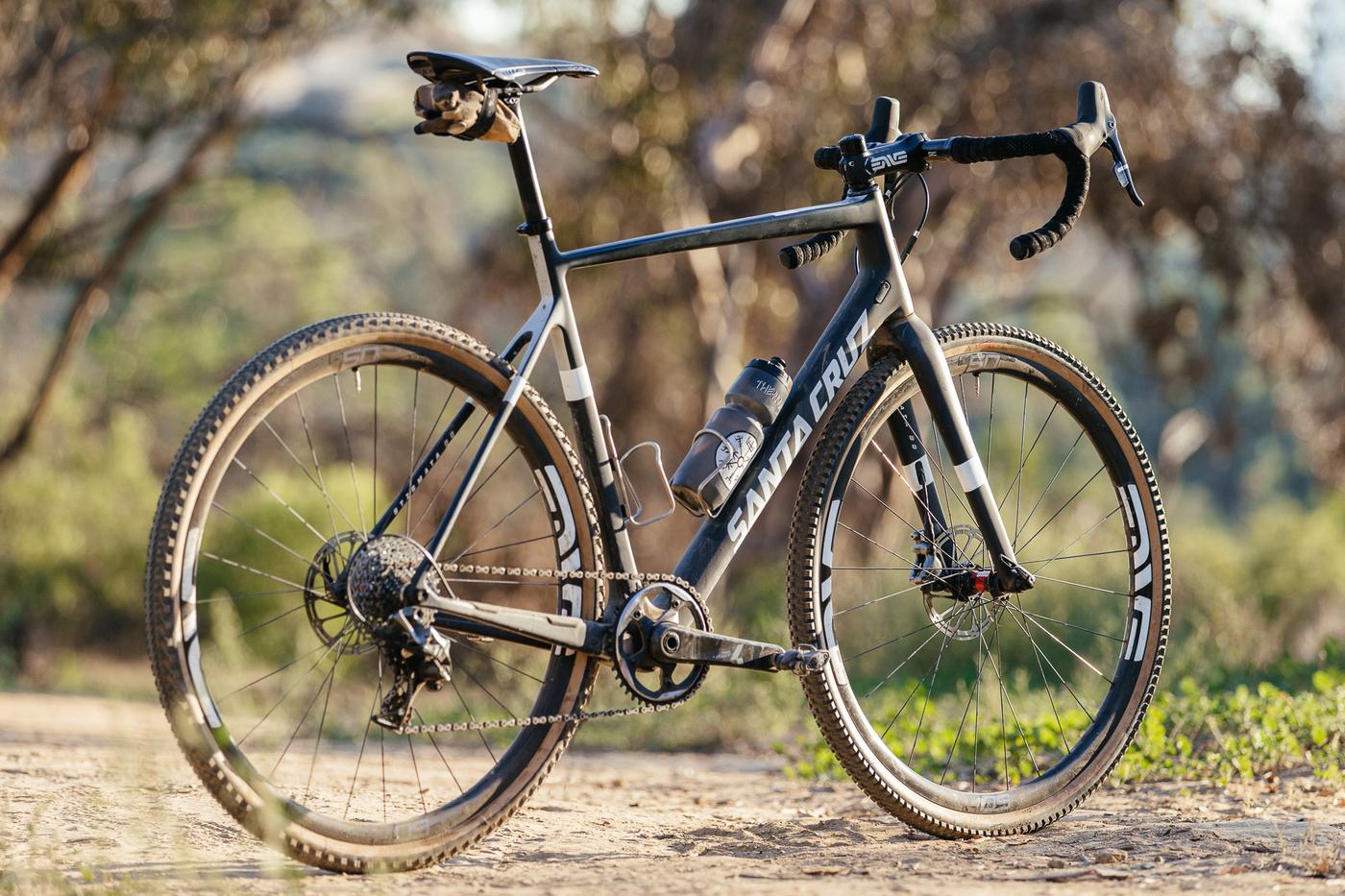 If I were in the market for a carbon fiber ‘cross bike, the Stiggy would be at the top of my list. See more about the Stigmata at Santa Cruz. Interested in riding one first? Holler at your local dealer.