“From riding through the sands in Baghdad to fighting thieves in Istanbul, Kara Ben Demsi ventured all around the world without ever leaving the saddle of his horse” – Rih.

It’s said that the stories of Karl May are the inspiration of the near-century old RIH Sport. And though Demsi is considered a German legend, RIH Sport is a legendary name in the global cycling community.

RIH, in Arabic, means faster than the wind. And RIH Sport racing bikes has lived up to the name. RIH Sport riders have combined for 63 Olympic and World Championship titles dating back to the 1940s. Among them is Gerrie Knetemann – winner of the 1974 Amstel Gold Race and of the 12th stage in the 1975 Tour de France.

RIH Sport began in 1921, when brothers Willem and Joop Bustraan founded the brand. In 1928, Willem’s son, Willem Bustraan Jr., joined the family business and relocated the shop one street over to Westerstraat in Amsterdam’s infamous Jordaan district – its home for the next 84 years. In 1948, “Wim” Willem van der Kaaij became an apprentice to the Bustraans as a 12 year old. And in the 1970s, he’d later go on to become the sole proprietor.

Wim was a master of the trade. But, he was unable to find a successor of his own and was forced to close the shop in 2012. But in early 2014, Wim took Lester Jansen under his wing. Jansen would go on to absorb Wim’s knowledge and skills before Wim passed away at the end of the year. And with a new torchbearer, RIH Sport Amsterdam reopened its doors in North Amsterdam.

The instant I walked through the doors of the new RIH Sport Amsterdam, I could feel the brand’s rich history. Old black and white cycling photos from throughout the decades hung on the walls next to vintage track, touring, and road racing frames – steeds that were once graced by legendary champions. A stack of books were laid on a nearby table; the top read, “De Fietsenmakers.” It was then that I realized that this new location was the perfect setting for the next chapter of this legendary brand.

Lester Jansen, the new builder/face of RIH, welcomed me with a proper espresso. I sipped carefully as he took me on a tour of the half gallery, half studio where he builds custom frames and repairs old ones. As he shared stories of his past life as a bike messenger, Riding RIH Track bikes for work – a time before Wim took him under his wings. I noticed a miniature track frame hanging from the ceiling. Lester explained that Wim had him build kids bikes for practice before making full-sized RIH racing cycles. He’s more experienced now, but he still builds kids frames by request. He even showed me a custom bike he recently built for a local kid; and who knows, perhaps a future champion. 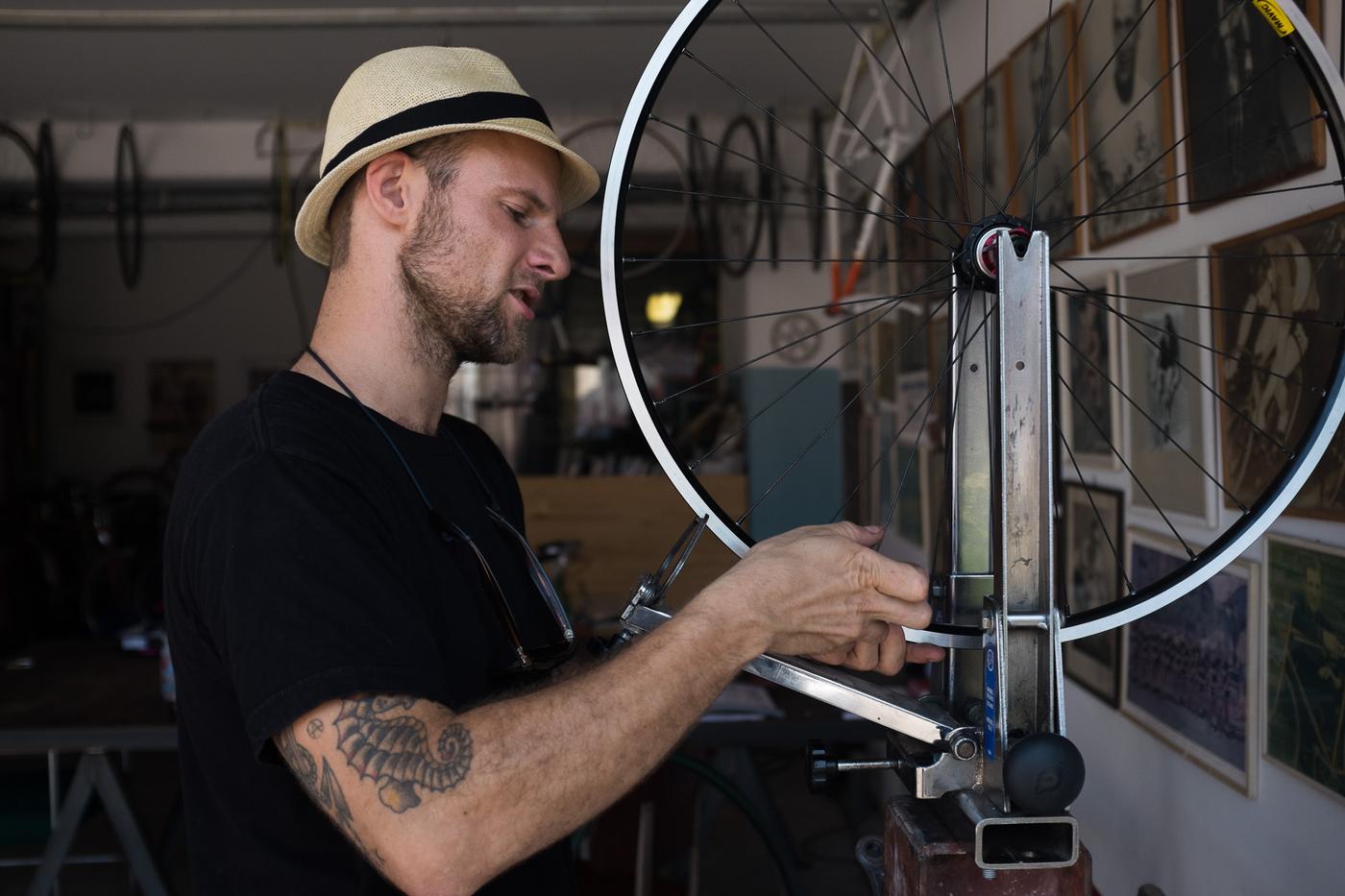 Lester was kind enough to discuss the day-to-day life as I watched him practice what he preached. As we were talking, he was simultaneously putting on the finishing touches on a new RIH frame for a customer who was due to walk through the doors at any moment. And Lester not only builds new bikes – he restores vintage RIH frames he finds and personally collects. Several of those classics are on display in the studio, or hanging in the back shop waiting to be resurrected.

RIH Sport frames are rooted in tradition, and now have the luxury of modern components. Lester has no plans to change the way he fabricates RIH bikes. “We have worked 93 years perfecting traditional lugged construction. Our technique has been passed down from generation to generation and I don’t plan on changing that.” Even though RIH bikes will most likely always be lugged, there are plans to modernize the bikes with disc brake mounts and carbon forks. “I love the aesthetic of super high-end lightweight racing parts paired with a classic looking hand-tailored frame.” 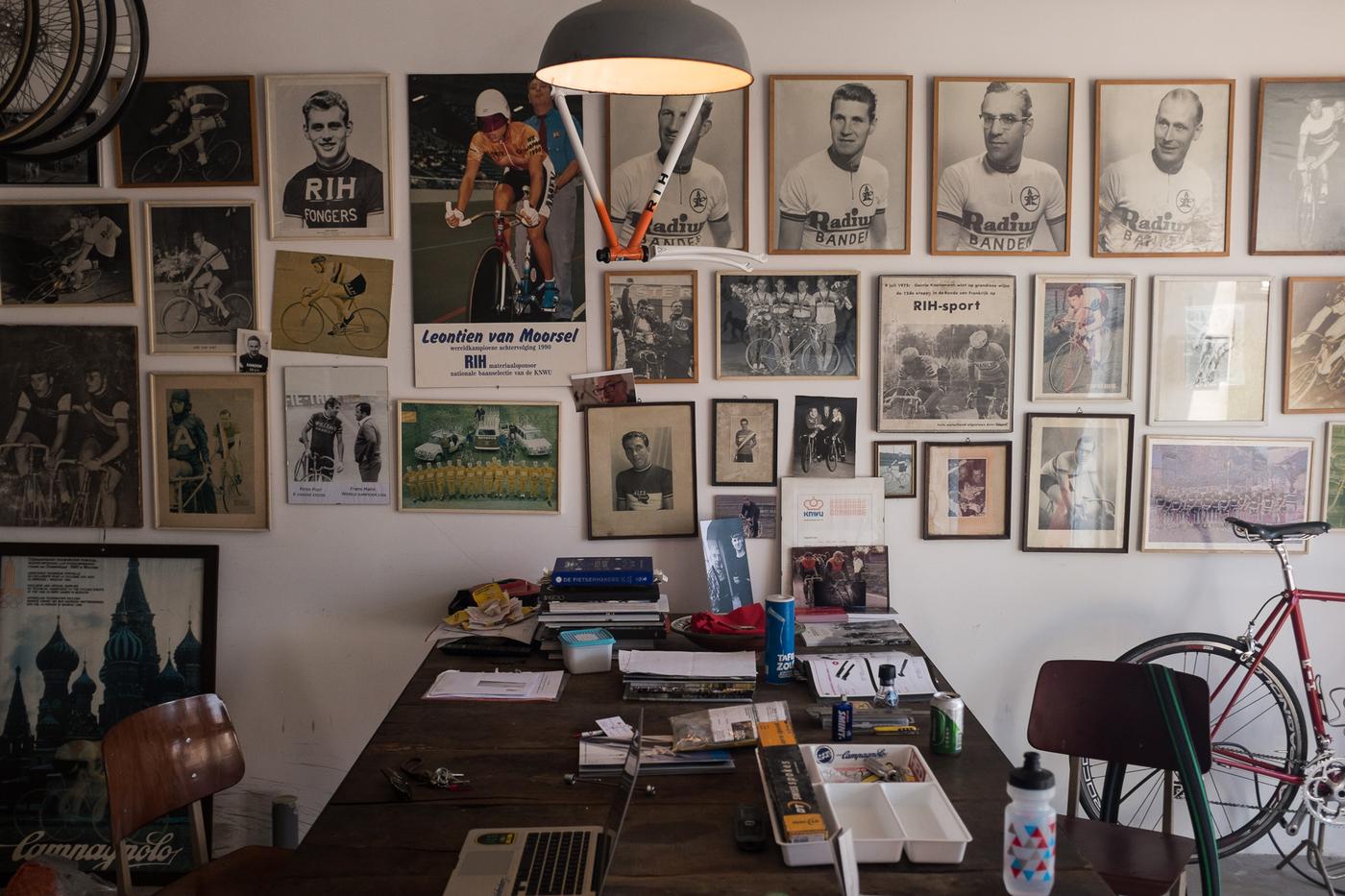 RIH Sport prides itself on its history and craft. If you’re ever in Amsterdam, make your way across the canal to the north and pay a visit to the new RIH studio/workshop. Whether you’re interested in buying a piece of Dutch racing history, or learning more about the company, contact Jon@rihsportamsterdam.com. Thanks Lester and Jon for letting me visit!