Sometimes, it’s the unexpected that delivers the most fun. Wheel size, when it comes to mountain biking, is a polarizing topic. People will swear allegiance to the 29r platform, without a blink of an eye and admittedly, I’m one that errs on that side. Being tall with long legs, I’ve kind of sworn off 27.5 hardtails.

They’ve either felt too squirrely for me to coerce or not big enough to roll out of hairbrained situations I often find myself in. If my riding ability were to be described in a word, it certainly wouldn’t be “finesse.” I need something that offers a larger diameter to correct little nuances in my riding habits. 29rs seem to deliver that.

Like a bucking bronco, those small wheels ain’t for this limestone cowboy. Or so I thought.

As previously stated in the Highball 29r post, Santa Cruz put a lot of work into developing their new 27.5 wheelsize option. While the general look and feel of the 27.5 version is almost identical to the 29r, all it takes is a few moments on this bike, particularly while descending, to tell that it is indeed, a different beast from its larger-wheeled sibling.

Ok, maybe it’s not all that different, but there are a noticeable points.

For one, the headset. While it’s a small detail, the bottom cup is a standard, press-in on the 29r and integrated on the 27.5. Because of the smaller wheel size, the chainstays could be shortened, thus the wheelbase loses some length, as well as steepening the seat tube angle to a 72.5º. But what I noticed, almost immediately, was the slacker head tube angle.

It seems like 69º is the magic number for hardtails (I should add that the Chameleon is also a very fun bike with a 67.3º head tube). It takes them from the category of XC race-specificity and dangles them over the all-rounder, “stunt” zone.

A 69º head tube angle is just right: not too slack to drop it into the AM range, or to make climbing a battle fought with a wandering wheel, nope. It’s just slack enough to make descents a complete blast. Even with the lower stack height (604mm versus 633mm on the 29r) frame, I never felt like I was going to fly off the bike descending. For reference, I rode the XL model.

Whereas I felt a lot of apprehension to fall in love with the Highball 29r, the 27.5 was love at first flight… It just whipped around so well. 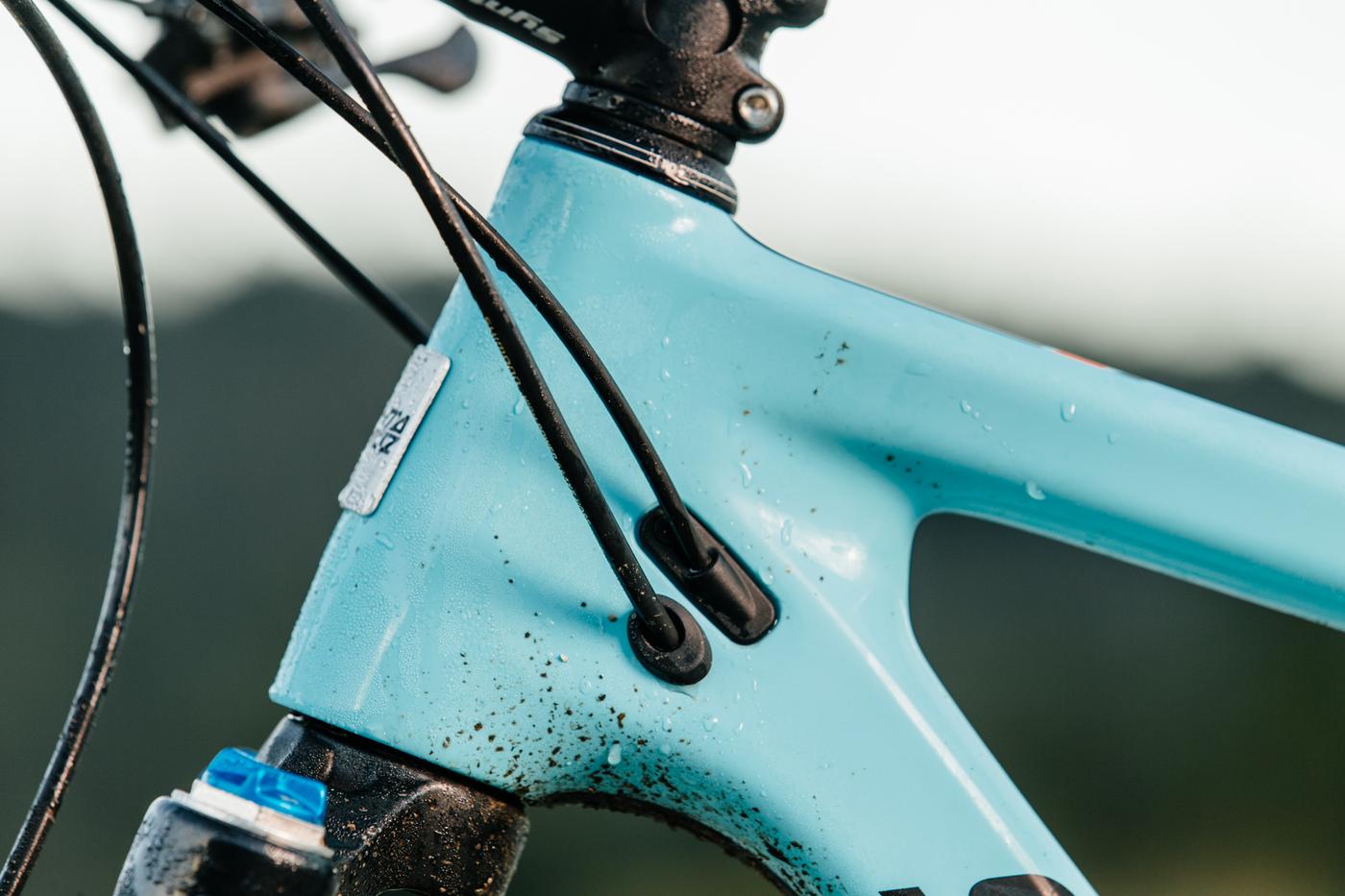 The Highball 27.5 has all the technical advancements as the 29r, it’s just in a different realm in terms of handling on descents but we’ve already discussed that. Let’s look at the frame. 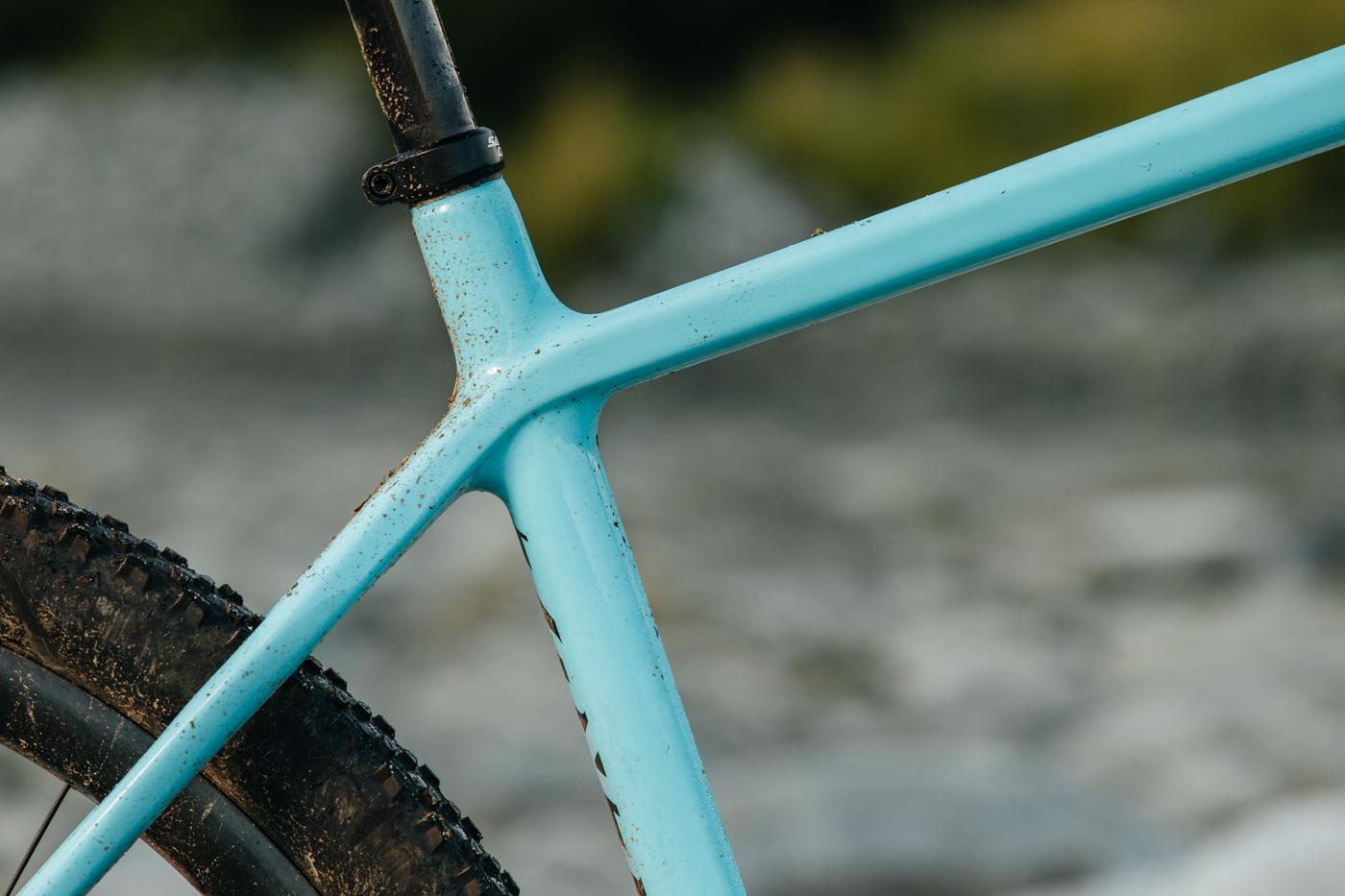 With the new layup, the lines are cleaner than ever and without the external routing, you can really focus in on the body language this bike is throwing around. Even sitting still, posing for a photo, it appears to have a meaner stance than its sibling. 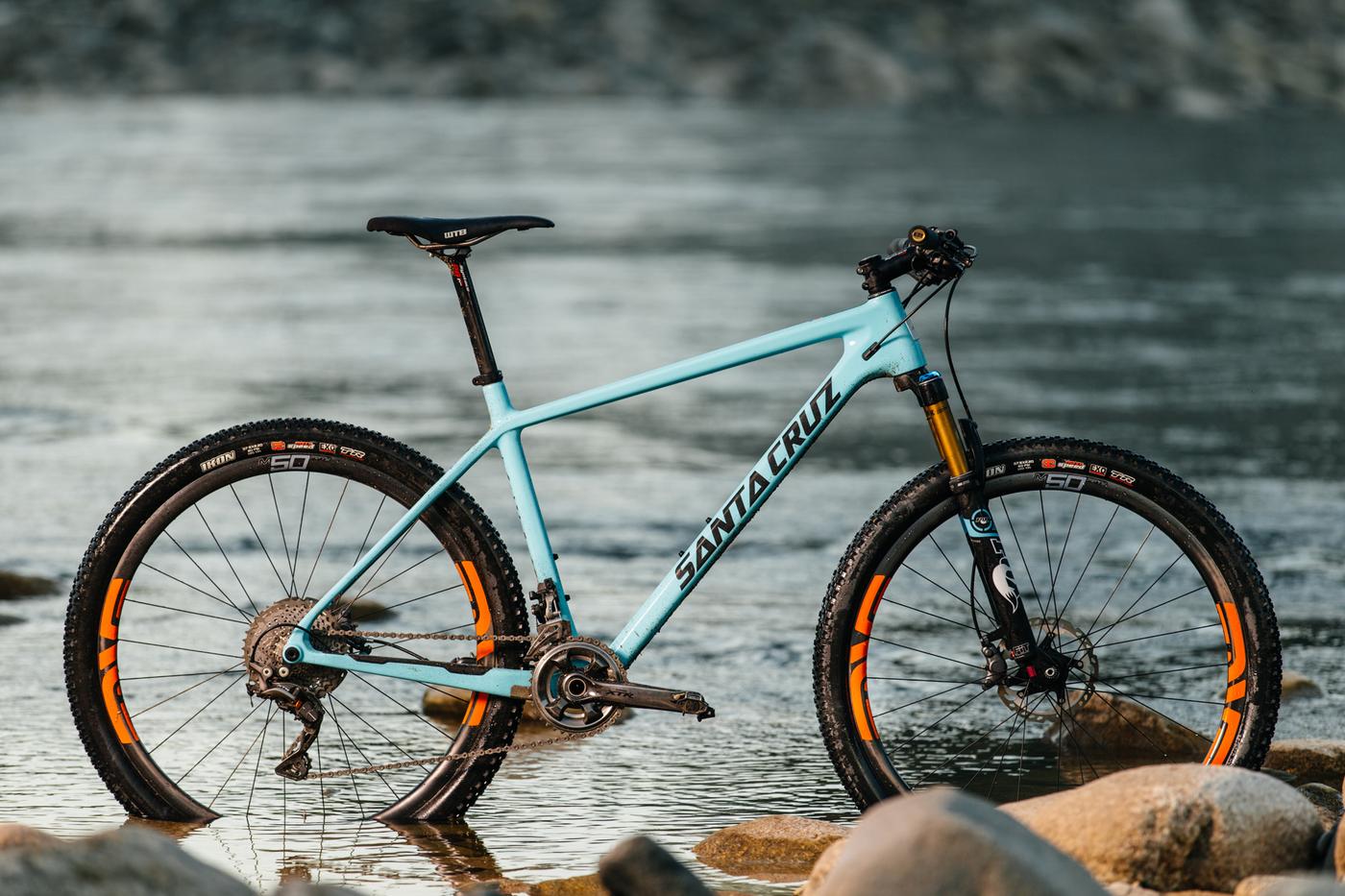 Granted, having ridden the rather stealth-like black and red bike with XX1, this blue frame with XTR looks a bit flashy. Although, with a price. Take note: with the ENVE wheel upgrade, suddenly you’re in the $8,799 water… Thankfully, the XT package without ENVE is only $4,299 with the CC-grade carbon. 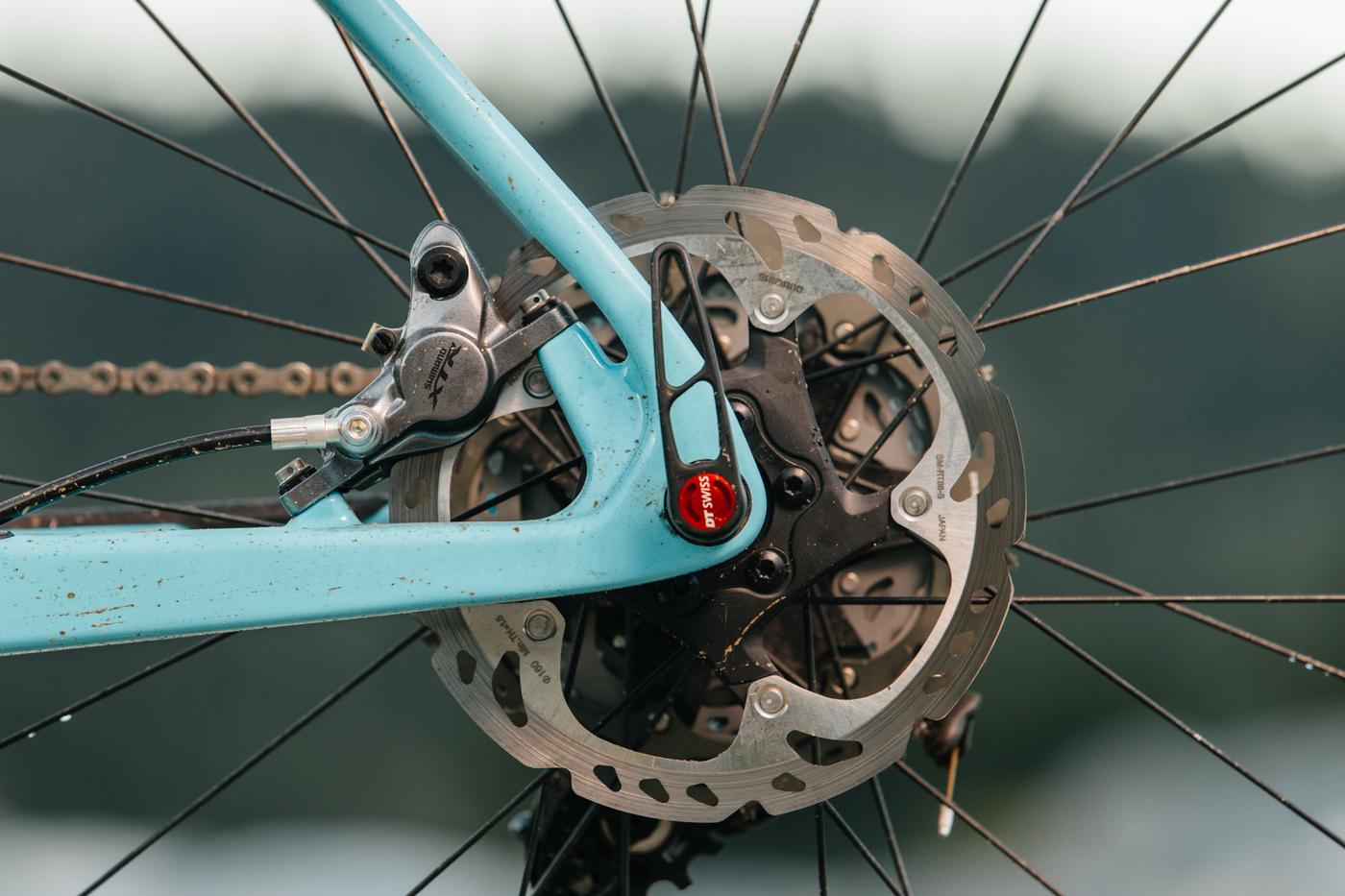 Another great detail on the Santa Cruz Highball is the new disc caliper design and placement. This new position eliminates the need for a chainstay / seatstay bridge. Although it does make it a slight pain in the ass to adjust on the trail with a compact tool. 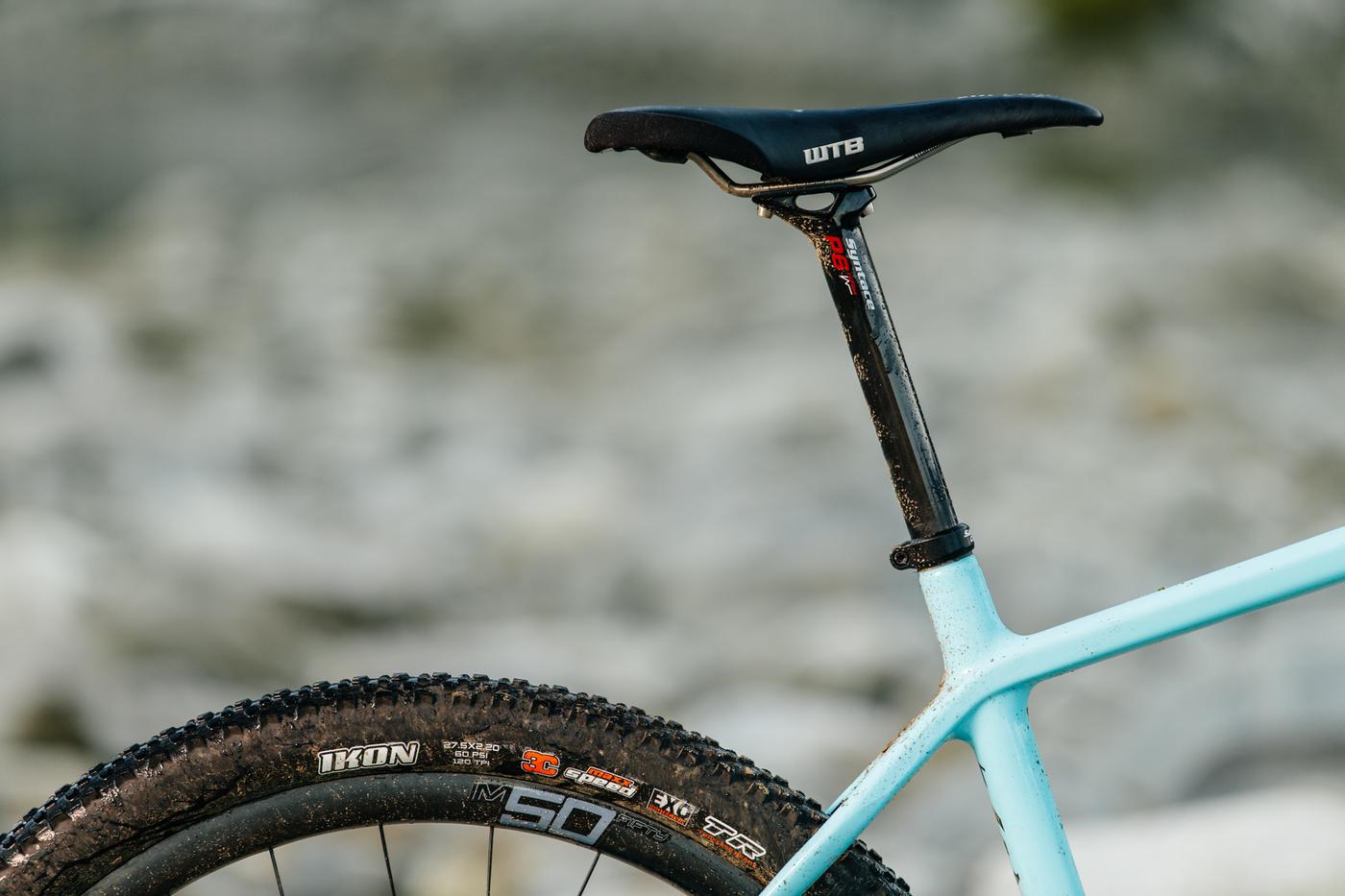 Now onto what seems to be the deal breaker for a lot of people, just based on internet chatter and commentary over the 29r. The 27.2 seat post. Since there are so few options for a 27.2 dropper and no cable guides or internal routing for a stealth post, you’re pretty much stuck with a Thomson dropper post and some zip ties, which is what almost everyone did on the media launch.

Personally, I can ride a 100mm hardtail just fine without a dropper, although it does add a certain amount of versatility to the bike, especially if you throw a 120mm fork on the front end.

Before to write off Santa Cruz’s decision to go with a 27.2, attempt to understand their rationale. Ever ride a standard 30.9 post for hours on end during a marathon on a hard tail? Yea, it ain’t comfy. The 27.2 diameter does allow the seat tube to be elegantly reduced, resulting in a lot more compliance, which is a good thing for your butt.

That’s really the only initial concern I felt the need to address. With a rowdy, confident stance like that, the new and improved Santa Cruz Highball CC 27.5 drew me right in. After an afternoon descending singletrack, I was sold. Maybe XC-oriented 27.5 hardtails aren’t that bad afterall? Or maybe the Highball is just that good.

If I were to chose between the two, based on ride quality alone, I’d lean more towards the 27.5, without discrediting the 29r’s confidence-aspiring ride characteristics. The stability and shredability of the 27.5 platform translates so well to the Highball and all I needed was one, 10-mile descent to change my opinion.

The Santa Cruz Highball CC frameset is available in black or blue for $1,899.

…and for or those seeking a weight comparison…

Specs and other information can be found at Santa Cruz. You can also compare my notes to the 29r version at Shredding the All New Santa Cruz Highball CC 29r MTB.