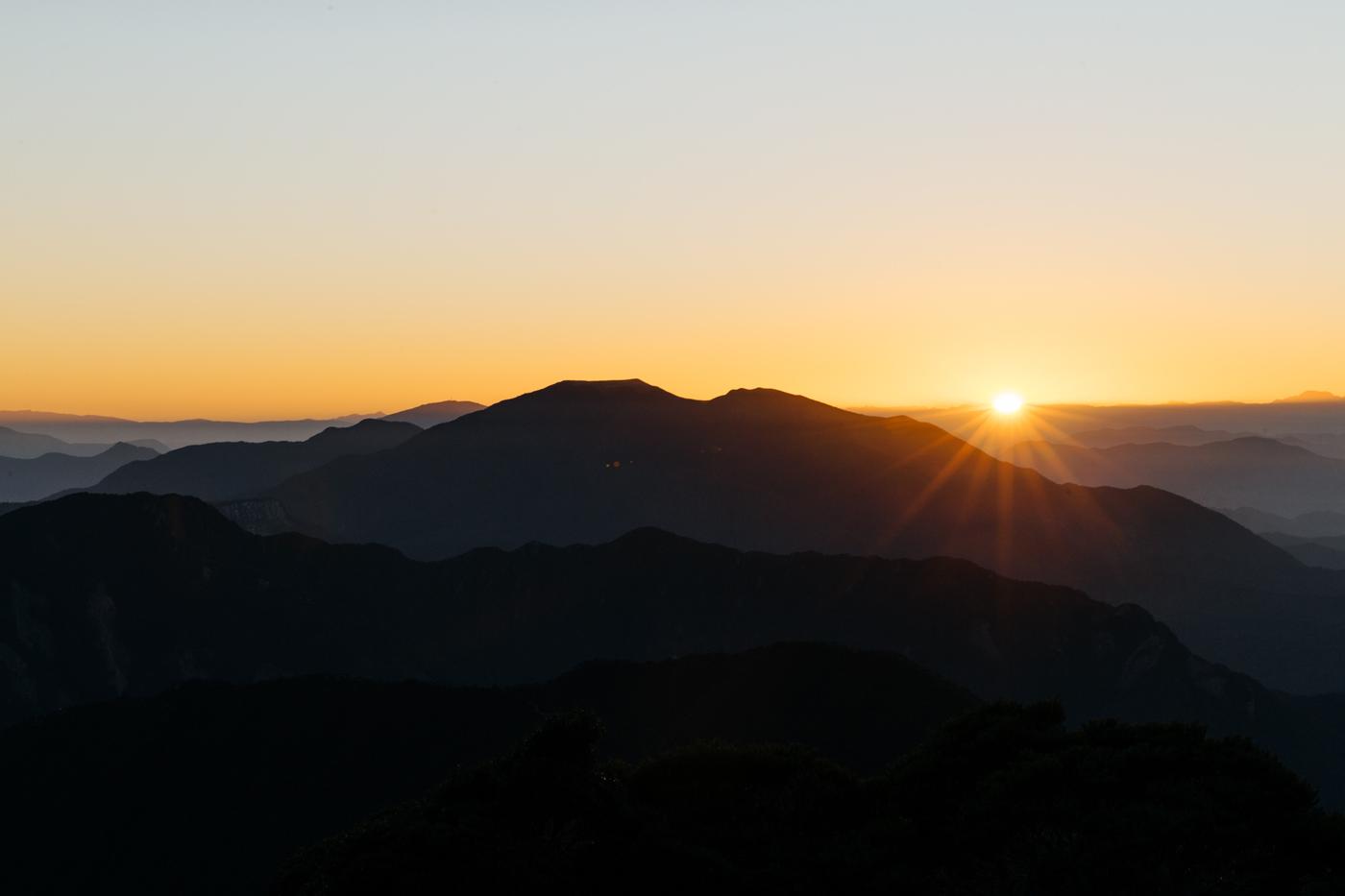 The New Zealand wilderness is truthfully only a few clicks away from civilization, yet you still feel isolated. Then, mother nature drops a nuke… Slowly, but surely, our group of 12 wayward journalists and Santa Cruz employees woke up from the tightly packed bunk rooms in our “hut”. I think it was the motorbike rolling up the trail that woke a few people. The trail volunteers had begun to show up to base camp.

Everyone began to go through the motions of their morning routine. For me, that was coffee.

We moved about the hut, organizing both our bags, bikes for the day and our thoughts. Mine, at the time, hovered around not wanting to ride the 27.5 MTB, after wanting to give the 29r another go and which lens to pack with me for the afternoon. Some hours later, as it goes on chilly mornings, we were all kitted up and ready to roll. 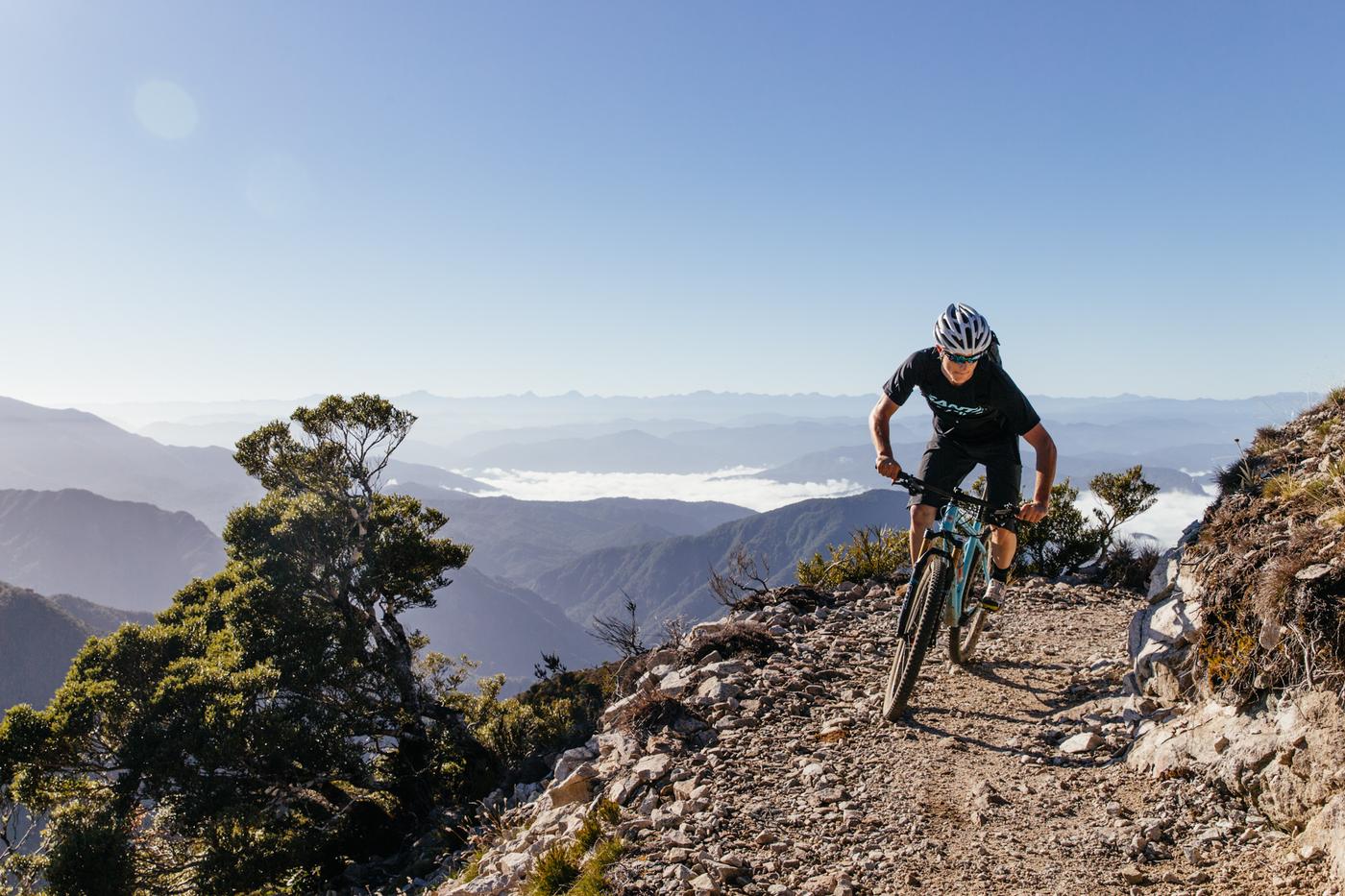 The whole trip, Sven had called this day the “downhill day” and as I clipped into my pedals on the Highball 27.5 with a 100mm fork, I quickly began to question what exactly he had planned. We were assured that, along the Old Ghost Road, nothing was too technical. Drats.

We would begin with a climb. Not too steep, nor long, but with full exposure. One slip and you’re going down a shear face for a while. The first couple of miles was all out in the open, which was were we spent a lot of our time documenting the riding, soaking in the views and harsh UV rays. 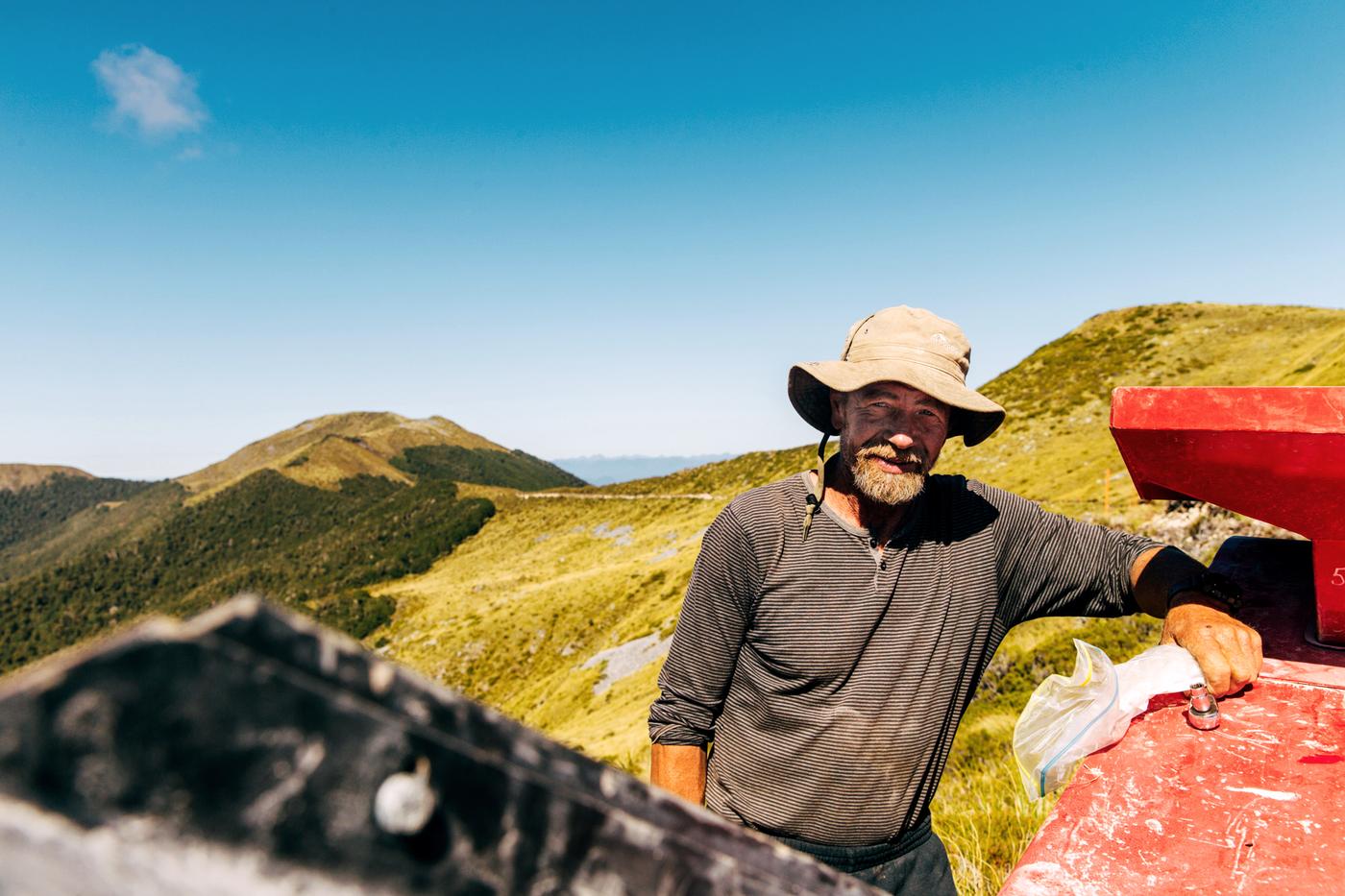 A few familiar faces were up on the trail that day, working. Paul is the most veteran worker on the OGR, having logged in just over 4 1/2 years. He and two other workers were busy breaking up large rocks into gravel, packing it into refuse bags for the chopper to then airlift back down to the muddy river trail where had ridden the day prior.

These volunteers have learned a lot in the time they’ve worked the trails and while their early efforts lie in completing the expanse in time for a July opening, after talking to mountain bikers, they’re keen on adding a few more features to make it even more interesting along the way. After a brief chat and some photos, I sprung ahead from the group and took a break from the sun in what little shade I could find. 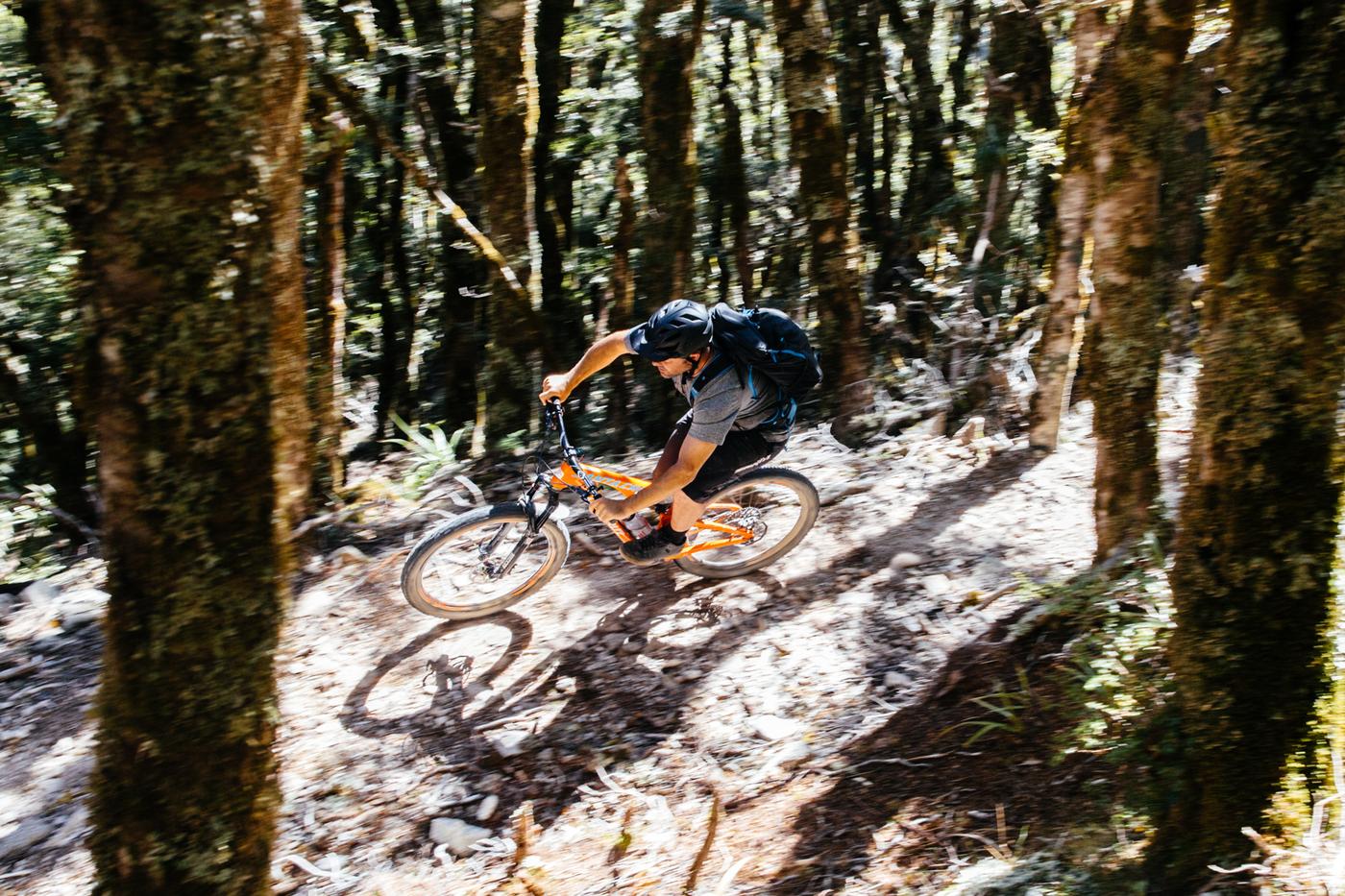 It wasn’t until the beginnings of the ripping descent through beechwood trees that we’d be in the shade. Temperature fluctuated just as rapidly as the terrain. Rocky, craggy, loose corners soon became packed dirt, then mud and even some nice little boots over tree roots started to pop up. Send it!

We’d break for lunch at another cabin, before blasting down a 10 mile descent with reducing radii turns and plenty of places to grab a handful of rear break, resulting in a dry and dusty roost. Once I stopped to see where my melee of gravel was cascading to, I took the turns a bit slower. We were still pretty high up and I didn’t feel like pulling myself out of a gully just yet.

Waterfalls fell across the trail as frequently as giant trees, large ferns shaded us from the mottled sun and all we wanted to do was hammer down the descent to the end of the trail. When you’re on a tight schedule, sometimes you miss the photo, but some things are best left to the imagination. 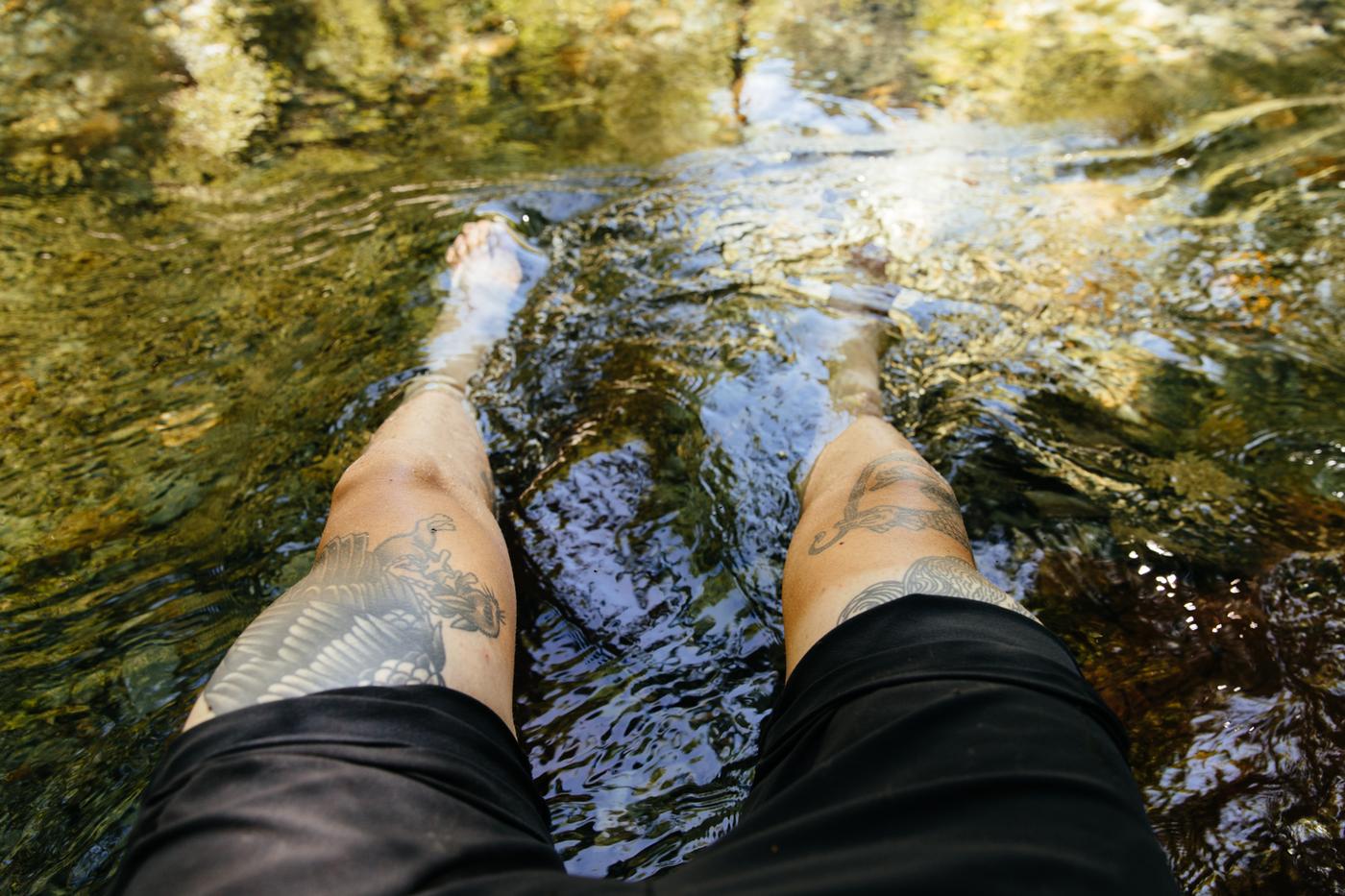 The end of the Old Ghost Road is adjacent to a swimming hole, which, coincidentally became a perfect place for a recovery dip. That is until the sandflies decided they needed an early afternoon snack…

Here’s the part where I thank HouseMartin, Santa Cruz and everyone that made this trip possible. I got to ride a few bikes and take some photos, but most importantly, I was given access to a truly unique trail and had the chance to meet some of the volunteers who made it possible. For me, that’s what I will always remember. Now if I can just find a way to come back with some friends, some bikepacking bags and more time… So yes, thanks to all parties involved, but kudos to the people who made the Old Ghost Road a reality.