I’ve ridden my share of 29’rs and up until recently, I was sold that the Tallboy and Tallboy LTC had the market cornered as far as geometry is concerned. Now, let me say that I’m an enthusiastic reviewer and that can be a double edged sword at times. I’d also note that I don’t particularly like doing reviews, not because they’re not fun, but I couldn’t really care for technical adverbage.

That said, I can tell naunces in geometry and component groups quite well and when something’s good, it’s good. Also, believe me, when it’s bad, it’s bad.

Luckily for me – yay new review bike – I’ve been in absolute love with the new S-Works Stumpjumper FSR EVO 29 – which has been replaced by the standard FSR 29 – and who wouldn’t be? This is a 29’r fans dream bike. Once you strip away the plush, crispness of XX1, the tunability and stability of the Rock Shox PIKE and the Fox Float rear shock, you’re left with one crucial element: geometry…

EDIT: it should be noted that this model is discontinued, which threw me for a bit of a curve ball. I assumed it was the current S-Works Stumpjumper FSR 29 model, which it is not.

Granted this is an initial review, but after two or three rides on some of the Austin area’s more technical trails, I noticed something: PEDAL STRIKE. Admittingly, I don’t like changing much on the rear shock, unless I’m climbing for a while. I’ll usually leave it on trail or descend around here but I still could tell something was up with the bottom bracket height, or down rather…

In the world of geometry, a few millimeters can make a huge difference. With a higher BB, you’re going to experience a zippier, more flickable ride and a lower BB will be more stable, easier to control at high speeds, like during descending, which so far, this beast rips! But if you’re too high, the bike will literally ride itself and too low, then, well, you’ve got pedal strike issues. 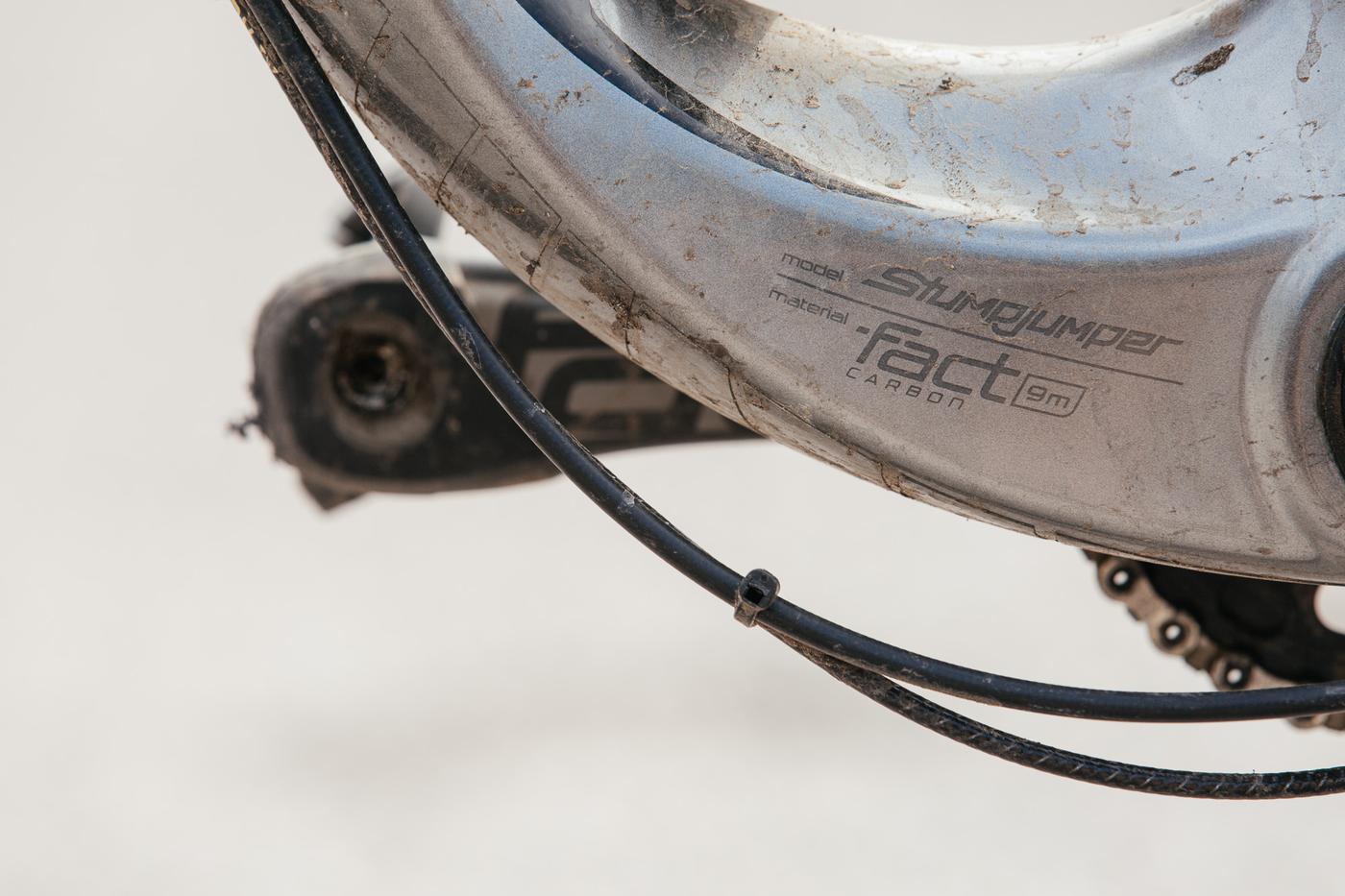 I’m a capable enough rider to check my pedaling on climbs, or watch my pedal positioning in rock gardens, but I still have to be mindful. My experience with BB height is 342.6mm on the Tallboy LTC – the bike I’ve had the most experience on. The S-Works Stumpjumper FSR EVO 29r is 335mm… Enough to matter? Some would say no, but I think yes. Enough to completely ruin my ride? Hell no.

Enough to sway me from wanting to ride this bike? Hell no.

So, something positive? It climbs so well. So incredibly well that after the first ride, I was completely beside myself. I took it everywhere, places I normally only like to climb on a hardtail or a rigid. This bike let me position my body where I wanted to and didn’t make it difficult to get over the front. Amazing… Especially for a 140mm travel bike. Usually longer travel 29’rs climb like a two legged pig.

On a 29’r with 140mm of front travel, you’re in that niche spot just above XC machines and below a full-on 6″ travel 27.5 bike. It’s a middle ground that I have a decent amount of experience with. In fact, all the 29’rs I’ve ridden are either 120mm travel, or between 140mm and 150mm, but have spent the most time on the longer-end of the travel spectrum. The S-Works Stumpjumper EVO is Spec’d with a 140mm PIKE – my fork of choice these days.

Not many reviews start out with critiques, so let’s move on to what I like. First off, the build spec as noted. Everything is choice, although I’d rather see the Guide brakes on this machine over the Avids. The internally-routed Command Post dropper took a while to dial in, but it’s good to go now.

Oh my god those S-Works cranks! The SWAT top cap chain tool is pretty rad, as well as the SWAT Zee Cage II multi-tool. Two details I’ll commend Specialized’s designers on. Luckily, I haven’t had to use either. SWAT stands for “storage, water, air, tool”.

The graphic consistency is a nice touch as well with all the stripes. From the through-axles, to the dropper lever, bars and wheels.

Oh yeah! The wheels! They’re surprisingly stiff and shredable. In fact, they feel a lot like the SRAM Roam 60 wheels – and knowing SRAM / Zipp / Rock Shox love for Specialized, it wouldn’t surprise me if they were.

Like I said, I’ve only ridden this bike a handful of times, but it’s already moved its way to the top of my 29’r favorites but I need to ride it elsewhere and really put it to the test before I can sign off on it. There’s a precious middle ground that the S-Works Stumpjumper FSR EVO 29r has found the perfect line in, aside from a small, geometric nuance.

If you ever have the chance to ride one of these rockets, do it, or if you have and would like to add a note in the comments, feel free to do so.

Here are the deets:

See more information on the FSR model at Specialized. The EVO model is discontinued…