Ride Along: Hanson Little and His Dodge Sportsmobile

Leaving your nest ain’t easy, especially when your home town has been good to you. Hanson Little used to be a pro BMX rider – on paper – he still rips and takes trips from time to time, but his days of going big are limited by past injuries and the desire to keep on the bike, not healing off it.

Recently, Hanson bought a van and sold all of his belongings, save for a few bicycles. He plans on spending a great deal of time on the road over the next few months, but before he left town, I met up with him and shot some photos of his new mobile digs.

This weekend, I sent over some interview questions, which he promptly replied to… check them out below in a special Ride Along!

Place and Placelessness: Life in a Van with Bikes – an Interview with Hanson Little
Words and Photos by John Watson

So you sold everything, bought a van and are planning on spending a year or so on the road. Are you crazy?
Hanson: Staying in Austin any longer was definitely gonna make me crazy. It’s my hometown, and though I love it I needed find out for sure if it’s the right place for me. I’m barely friends with anyone I grew up with, only people who have chosen Austin as their home and I knew I had to do the same to continue enjoying it. So here I am on an extended recon mission in an effort to make an informed decision.

What kind of van is it? Does it have a nickname?
Hanson: Issa Dodge(probably a reference only you will ever get) – 1999 Dodge Ram Van 3500 Maxi converted to a camper by Sportsmobile. I’ve jokingly called it the White Whale, but out here it’s just “the van” in my thoughts since I haven’t had a face to face conversation with anyone yet.

Any glaring mechanical concerns?
Hanson: The van has almost 200k on the clock, and being a fairly knowledgeable mechanic…everything is a concern. While prepping for the trip I did what I could to minimize the risk of a breakdown, but I’m no fool. Well, I did wait about 700 miles before buying the tire iron I’ve been missing, so maybe that last statement is questionable.

What was the hardest thing to leave behind in Austin?
Hanson: Without a doubt, my girlfriend Vanessa and the home we share. Nobody has patience or understanding like her, what a gift to be sent off with a smile. 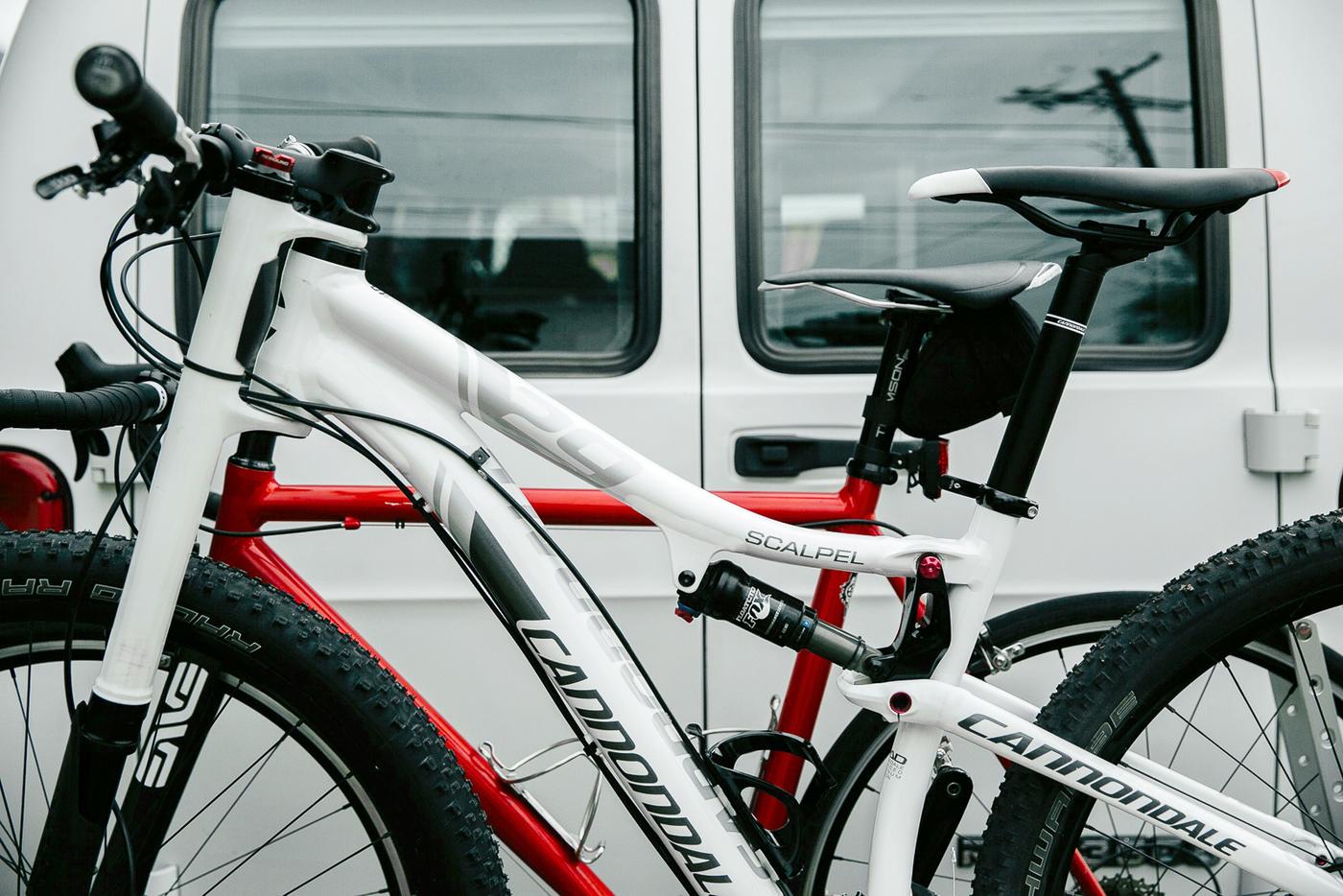 Which bikes did you bring along and what was your reasoning?
Hanson:
BMX – It’s what I do. T1 Barcode.
Road – Gives me the chance to experience the wonders of the road at a much more digestible speed, as well as push my body in ways BMX never could. I also enjoy racing, almost specifically because there’s no way I could ever win. I’m in the process of building a new bike that I hope to share with you soon.
MTB – So much fun. My 25 years of BMX injuries have mostly been leg-related so I can’t hike deep into wild places without a lot of pain, but why would I bother when I can pedal and jump stuff along the way?! Full suspension is awesome in my book. Cannondale Scalpel.

I saw you were in Marfa, TX – for a minute… your thoughts?
Hanson: I could easily judge the shit outta Marfa, but in reality it’s not the worst place I’ve been. It probably has more Range Rovers than the rest of western Texas combined, nothing is ever open, the only people that seem to make money from tourism are the rich people who used to be tourists themselves…but art is cool and the town is not very far from more sincere places.

You’ve been on the road for about a week now, what’s the shittiest thing you’ve seen?
Hanson: It was a simultaneously cool and a bummer to have a coyote cross the highway just a few yards in front of me while I was riding Wild Rose Pass near Balmorhea, TX. I watched him emerge from the brush on an obviously well worn animal trail that continued on the other side of the 70mph road. The proximity we shared due to me being all alone on the road early in the morning was unique, but knowing he and his pack have to risk their lives to follow their ancient trail so we can drive across the vastness of west Texas was a front-row seat to how disparate humans and wild places have become. Says the guy getting 17mpg all alone just so he can know if he likes a certain city or not.

… and the best thing you’ve seen?
Hanson: An extremely elderly couple in a car they’ve probably owned since the 50’s, chasing the sunset on I-10 with matching mobility scooters on the back. Seeing them doing 50mph in an 80 zone nullified every excuse I’ve ever come up with.

Surely you’ve learned a thing or two, what has the hardest lesson been?
Hanson: I’ve learned something about myself every day. The easiest to express thus far is how reliant I’ve been on my reputation in Austin. I’ve had 30 years to cultivate a persona that I would regularly use to skate by for weeks at a time without ever doing anything noteworthy. Now, only my actions from the immediate present define who I am in other people’s eyes and I already feel an improvement in my appreciation and utilization of all the now moments. At this point the hardest lesson seems like it will be defining myself in those moments, outside the reach of my reputation.

Where to next?
Hanson: I just pulled into Silver City, NM. I’ll be here for a little while, trying to catch drafts from some of the cycling teams training here (6k elevation) and riding/skating the concrete skatepark. This is a main destination for me, so I guess I’ll figure out the next one when I get bored here.