Post a photo of drop bars on a mountain bike, and chances are, someone will reference the American rider John Tomac. In the late 1980s, this BMX racer turned full-on MTB superstar and became known for sporting a style never before seen in the growing sport. Drop bars, Tension Disc, and tabletops, Tomac had it all. In 1991, Merlin Titanium crafted this Raleigh John Tomac Signature frame from titanium and carbon fiber.

The bike made its debut at the XC World Championships in Il Ciccio, Italy before a limited run of frames was produced for public consumption, and today, we’re debuting it on The Radavist for your consumption. Check out the full history by Eric Rumpf and photos by Elizabeth Wilcox below! Through the late 80s and into the mid-90s, even if you were the most casual of mountain bikers you knew the name John Tomac. Gracing the pages of every mountain bike magazine with countless articles and interviews, he was the most flamboyant rider and the humblest human.

Tomac’s winningest year on the international stage was 1991 when he took the title of overall GRUNDIG World Champion. He capped off the season by taking gold in the XC World Championships in Il Ciccio, Italy. The bike that took him there was this Raleigh John Tomac Signature. 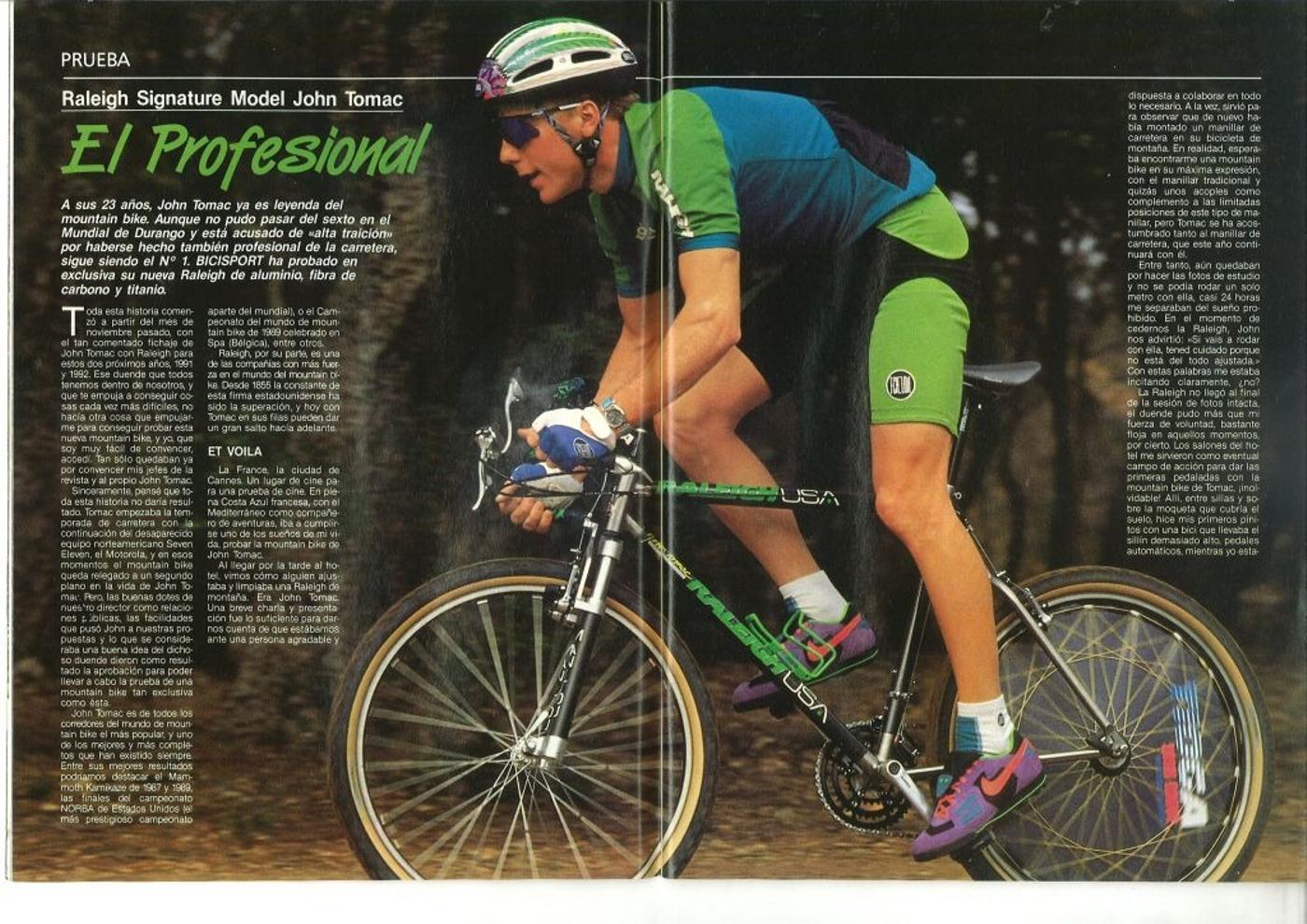 Before we get to the Raleigh, we’d be remiss not to acknowledge the Tomac bikes that came before. When John transitioned from BMX to MTB, he was a factory Mongoose rider. The first Tomac signature was a Tange Prestige Mongoose released in 1987. In 1989, Tomac rounded out his Mongoose contract on a Merlin-made titanium Mongoose with a Yeti fork. The following year, Tomac went full Yeti on a handshake deal with John Parker. He started the season on a rigid FRO and ended on the famous carbon/steel C-26 with a Doug Bradbury Manitou fork and Tioga Tension Disk.

As if the C-26 with thundering Tioga Tension Disk wasn’t distinct enough, Tomac ran the bike with drop bars. Tomac attributed his decision to run drop bars off-road because he was pulling double duty at the time, racing professionally on the road as well as MTB. He set up the mountain bike to mimic his road bike positioning for consistency. Tomac has stated that this setup was absolutely sketchy to ride. To make the bike go as fast as he did is a testament to his skill.

Because of his popularity, this set-up was often emulated and resulted in a negative experience. The practice of off-road drop bars is nothing new and was commonplace in the mid-80s. Builders like Charlie Cunningham, Steve Potts, and Scot Nicol regularly built mountain bikes around off-road drop bars, and there is a specific way to set a mountain bike up correctly. As unforgettable as it was to see Tomac race on drops, that road-based setup should not be emulated. In 1991 John Tomac signed a contract with Raleigh. This major shift came with a brand new bike, custom-made to Tomac’s specifications. Tomac leveraged his experience riding exotic materials on previous bikes to help Raleigh design one of the most drool-worthy race bikes ever created. The John Tomac Signature Ti/Carbon was made with a Merlin titanium head tube and rear triangle bonded to Easton C9 carbon-wrapped aluminum main tubes using Raleigh’s Technium technology.

The first iteration had a full Shimano XT build kit, Tioga Tension Disk, and Bradbury Manitou fork. The spec evolved throughout the year, but it was set up with drop bars for the first two races of the ’91 season. The Raleigh John Tomac Signature would only see two races with this drop bar set up before Tomac focused on mountain biking full-time and reconfigured the bike with more traditional flat bars.

The component spec moved from XT to a prototype XTR drivetrain and then to a mix of Grafton, Ringle, Grip-Shift, and upgraded Tioga components. Decal placement and color changed from green to blue. The Merlin-made Raleigh frames saw two full seasons of hard use. By 1993, a Litespeed Ti version of the Raleigh took its place.

Few mountain bikes have hit holy grail status as quickly as the Tomac Signature Ti/Carbon. Looking back two decades into the budding vintage mountain bike collector community, the rumor was that only ten of these Merlin Ti/Carbon frames were ever made. A few of us Tomac super-fans would start to collect details and document these rare bikes. Throughout the process, we learned that nearly all of the precious few were accounted for. As time went on, two more surfaced, bringing the total into known existence to twelve. An industry source close to Raleigh and Tomac recalled only a dozen being made at the time. Later, in a total fluke, a thirteenth Merlin-made Ti/Carbon was found. We had to have found them all. Or so we thought. 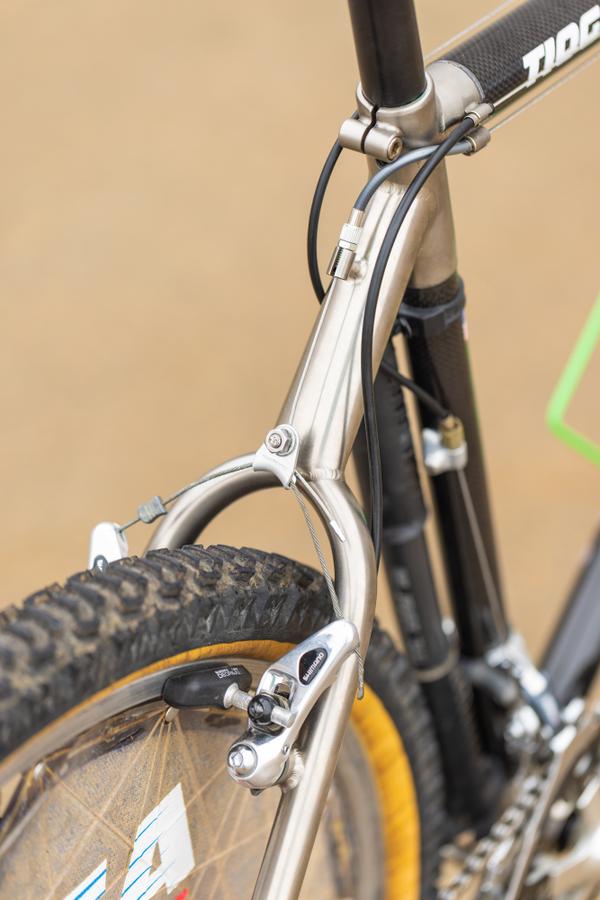 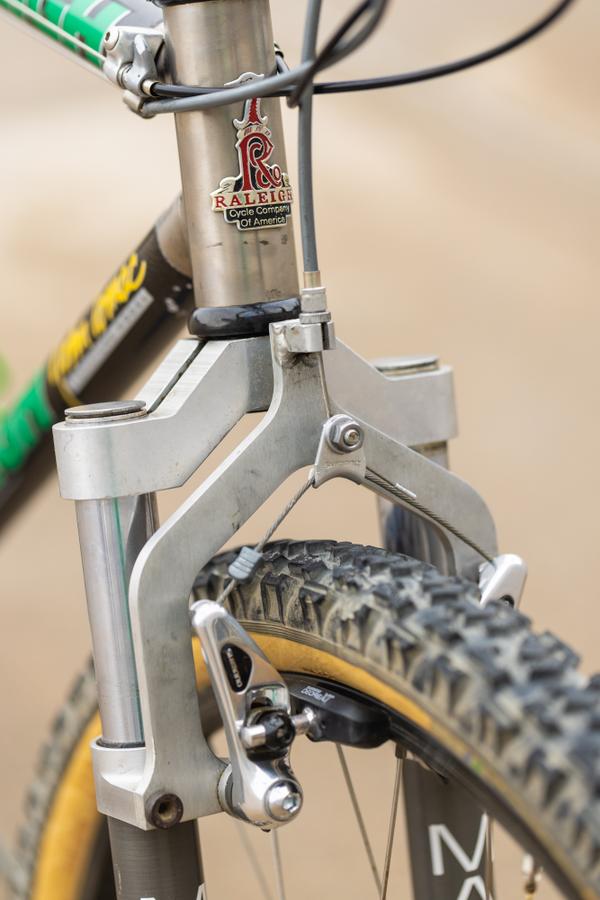 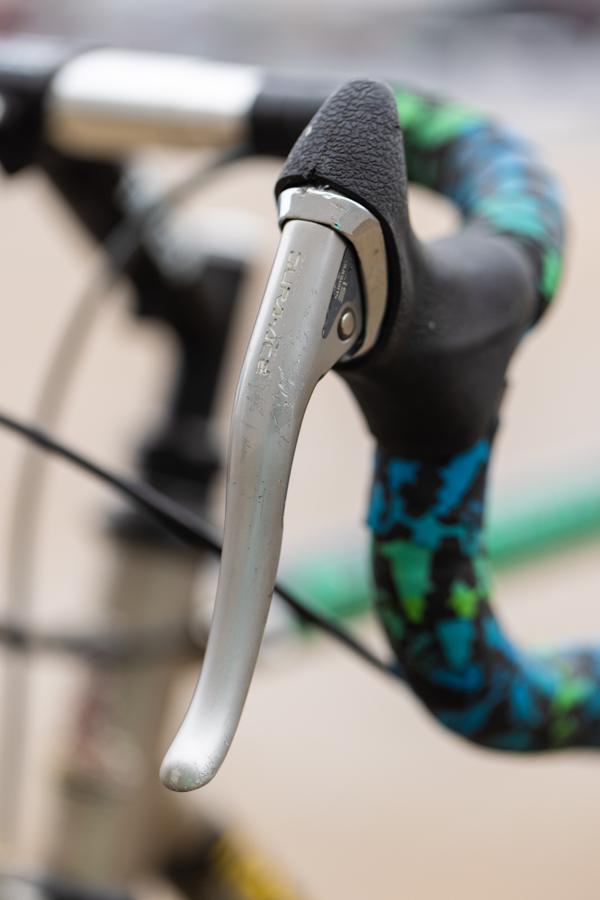 From the USA to Indonesia and Back

Good collectors and hunters of rare and exciting things are always looking, networking, and following leads. A low-production, high-visibility bike like this means many people are vying for it, increasing the competition for something already difficult to get your hands on. It would be the equivalent of finding a 1965 Shelby Mustang GT350R in a barn (except they made more of those). While doing a deep dive on everyone’s favorite social network website for all things Tomac Raleigh-related, someone mentioned in an obscure conversation that they knew a guy in Indonesia who had a frame.

The likelihood of this being legitimate was astronomically slim. Alongside the premier Ti/Carbon frame, Raleigh also offered a full titanium model which used more cost-effective Russian-sourced materials. This is likely what someone means when they say they owned a titanium Tomac Raleigh. Still, it never hurts to ask.

With the name and contact info of the supposed owner in hand, a message was sent into the ether asking if they indeed had a Signature Ti/Carbon. A week passed in silence. Then, finally, a short reply with ‘yes’ and a single photo. It was true! Introductions were made and a few follow-up questions were asked. Then silence again. Another ten days passed before a gentle check-in with the owner. Then silence for another month. Just when all hope was fading, the owner replied. Negotiations unfolded over the course of another month until a deal was struck to buy the Merlin-made John Tomac Signature Raleigh.

Shipping a bike from Indonesia to the USA is a risky process, let alone between two strangers a world apart who met by happenstance on a social media website. But as dark and crummy as the internet can be, sometimes there are really genuine and trustworthy people. Settling up for the frame safely and working out secure shipping arrangements would take another month and a half. There were so many ways that this could have gone wrong… but thankfully it didn’t. The seller was as honest and upstanding as anyone could hope for. The conversation started in early May and the frame landed on US soil in mid-August.

Thus, a fourteenth Merlin-made Raleigh John Tomac Signature Ti/Carbon had been found. The needle in a haystack. With the frame in hand, it needed every single part to make it whole again. While there were no hidden surprises in the frame’s condition, it was ultimately used as a commuter in Indonesia. One of Earth’s rarest and most highly sought-after mountain bikes had been a knock-around townie! The bike needed a new direction. Normally it’s preferable to leave something like this as original as possible. But this bike came as a bare frame with enough wear to warrant something more. While it is not one of John Tomac’s actual race bikes, it was an opportunity to make an exact copy of an icon in full race livery; an early version of the bike with drop bars and all. In this rare case, the decision was made to do some restoration work to the frame. The clear coat was heavily worn and a bottle rivet spun. A trusted carbon expert was sourced, the exposed carbon was cleaned up and treated to a fresh clear coat, and the bottle rivet was re-secured. The frame returned looking like glass!

Parts gathering and resto work would ultimately take several years. Some things came easier than others. A close friend and fellow Tomac expert helped provide accurate replacement decals. A full XT build kit in new or near-new shape was a must and was relatively easy to get. A gray Selle Italia Flite Ti saddle was a bit more challenging. A Tioga Tension Disk in working order was an even taller order. As it were, one of the most difficult pieces to find was the Off The Front handlebar tape in the blue/green Hammerhead print. 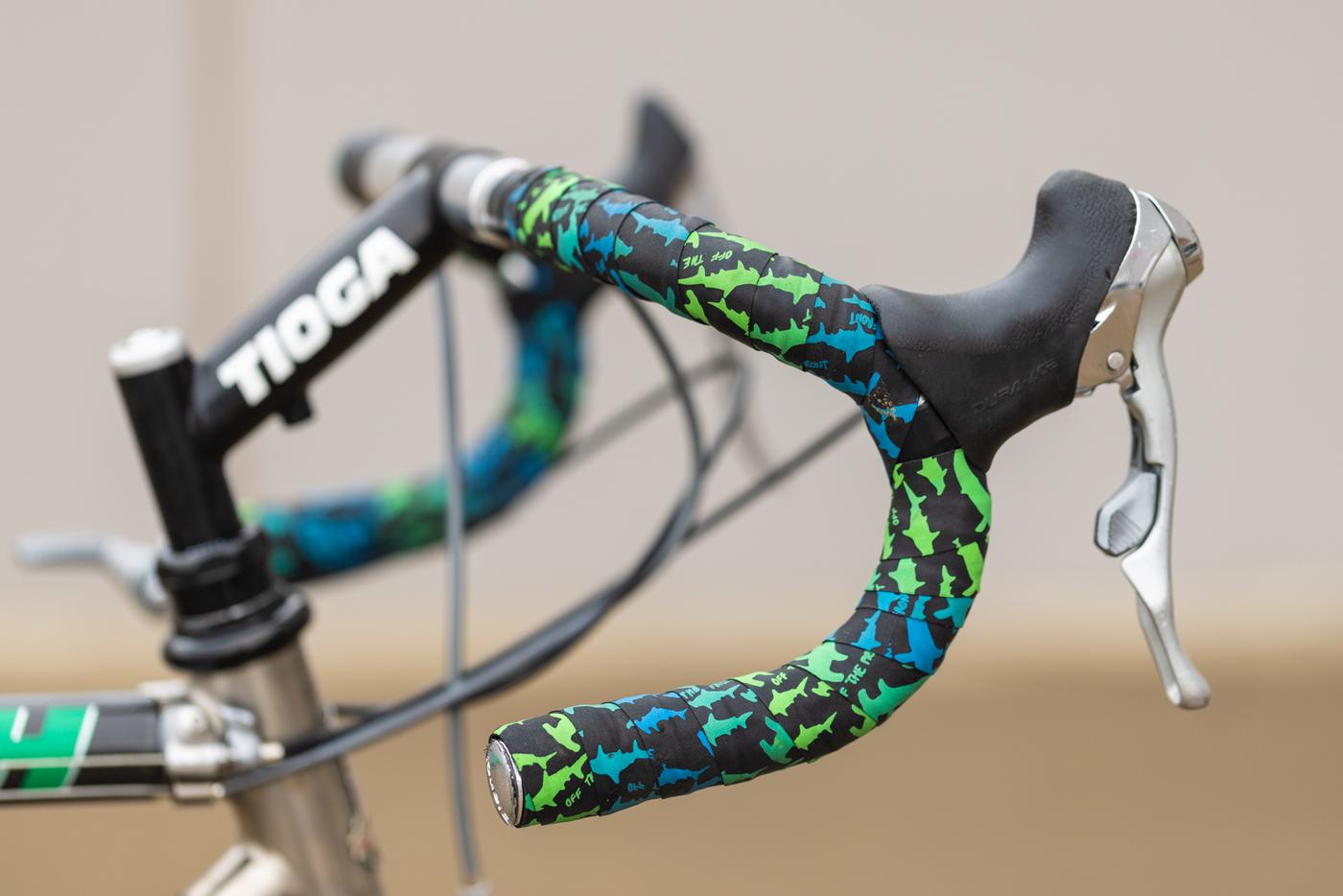 We literally bought used bar tape from a guy in Europe because anything but the correct tape wouldn’t look right. The Bradbury Manitou fork was rebuilt, and it actually feels quite plush in all its 1” (25.4mm) of travel glory. Decals were carefully laid in place and the bike was assembled. There were no real surprises, though running the mismatched barcon front and STI rear shifting was interesting. It is now a fully functional vintage race mountain bike.

After years of consistent searching, months of waiting, and some fortunate timing and good luck, this John Tomac Signature Raleigh is now a completed project. By the numbers, we determined that six of these Merlin-made frames went to John Tomac himself, and one went to his teammate. These frames were raced hard in both XC and DH formats. Not one frame failure was ever reported. This means only seven frames even had a chance of being available to the public. With an MSRP of $6,500 (in 1991 dollars), it wouldn’t have been the kind of bike that sold in high numbers anyway. We may never know how this particular frame came to be in Indonesia. The fact that it surfaced at all is a miracle. It now takes up residence at The Pro’s Closet Museum for all to enjoy. 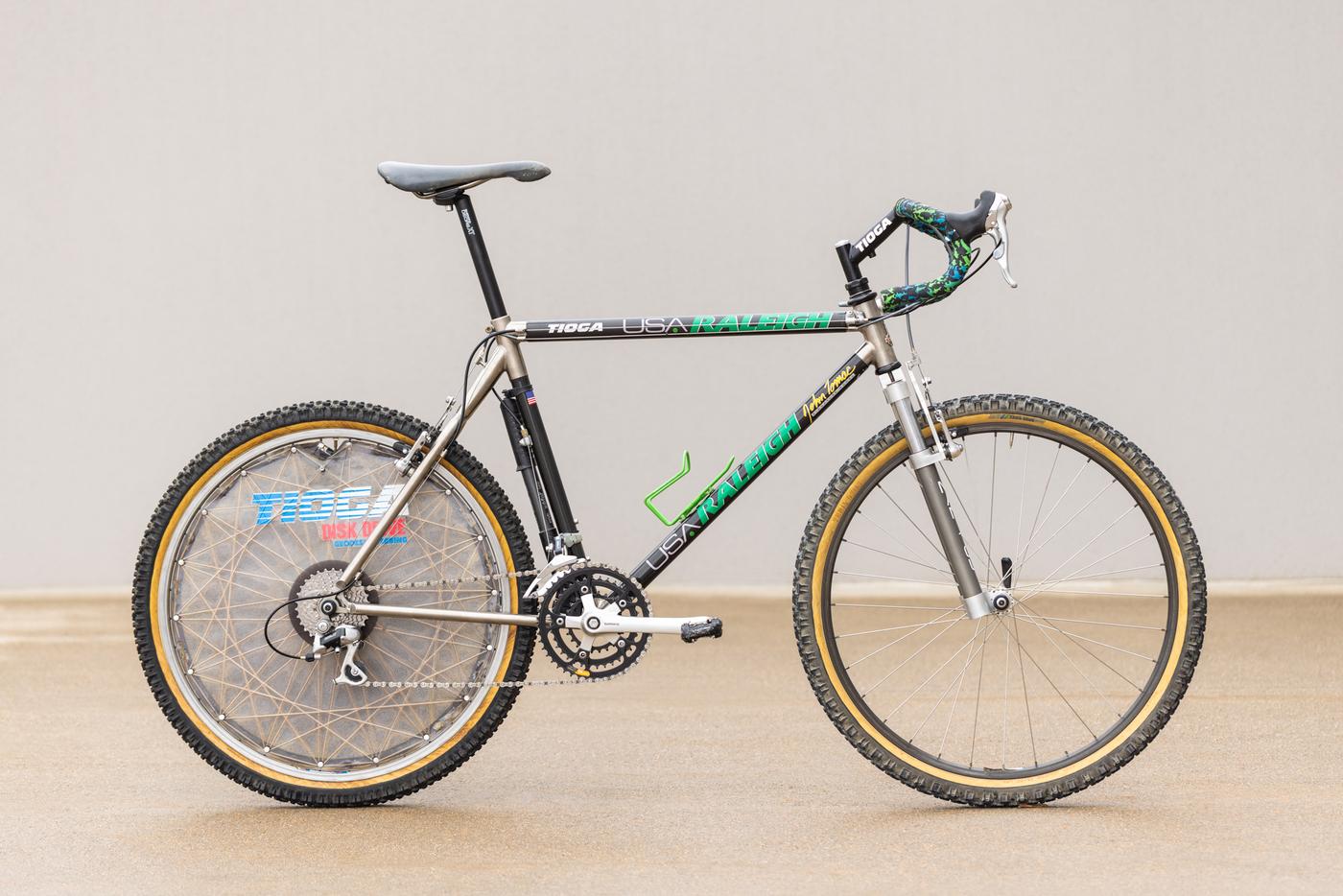